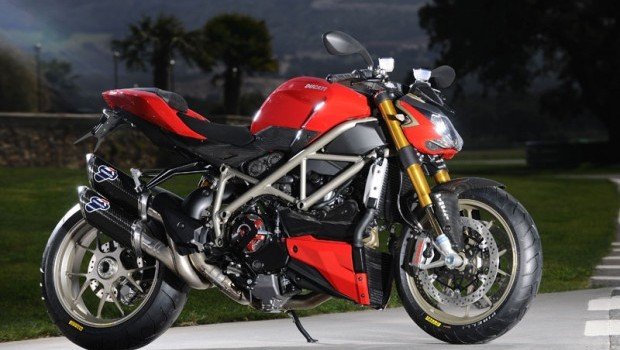 So there I am, commuting to work astride a lovely black Ducati Streetfighter S. The roads are greasy, the traffic is heavy, the clutch is slightly grabby and the throttle response on Ducati’s most aggressive-looking (and therefore most appealing) model is…um, somewhat immediate.

No biggie. That’s how Ducatis roll. My biggest issue with this carbon-fibre-kissed Italian weapon is its supernatural narrowness. Especially after the legs-akimbo bulk of the B-Czar.

But I am nothing if not adaptable – and the Streetfighter S is exceptionally good at kneading my hooligan glands, so if it likes me to sit on it like a lady in a tight dress, I am happy to do so.

Anyway, I am proceeding down Windsor Rd, and I encounter a clot of traffic two lanes wide at a set of traffic lights where there is an empty right-hand turn lane. With immense grace and élan, I split between cars, find a gap big enough to deal with the unfortunate turning circle of the Streetfighter, swing right into the right-hand turn lane and throttle on with a will as the lights go green.

I snick it into second, and revel at the urge all too evident in that glorious motor, before buttoning off as another clump of traffic waits for me up ahead. As I veer into the left lane on a trailing throttle and line up the stationary cars to do some more lane-splitting, I hear the all too familiar whoop of a siren. I glance in my mirrors to see them filled with a horrible unmarked green Ford FPV with a blue and red lightshow flickering on its dash.

My momentum carries me past the first two cars in front of me, and then a strange slow-speed farce ensues cos there is nowhere for me to pull over.

The Highway Patrol car is now two cars behind me in the middle lane with all his electrical hatred blazing and I am in the left-hand lane. Because of the traffic, we’re all doing about five km/h.

I did consider doing a runner, knowing full well he’d stand no chance of catching me as the traffic only gets thicker as it approaches Westmead. But I also know full well that he’s filming me, and has my numberplate. And I don’t imagine Norm Fraser Imports’ lovely young Alison Fraser (who organised the bike for me) would stand up under too much torture before tearfully shopping me to the cops.

This low-speed pursuit continues for almost a kilometre before the police car finally manages to get the car-driving retards to notice him, get out of his way and we stop.

I get off the bike, walk towards the car and offer to find a side street where he can Tase and baton me at will before bundling me off to gaol. He waves me angrily away and I go and stand by my bike to await the inevitable.

A young constable emerges from the hideous green FPV. As he gets closer, I see no name tag. In its place is a tag that states Task Force Talon – the mob that hunts, kills and eats street racers in NSW.

He gives me the now standard “You’re on video” speech then asks if I have any reason that could possibly explain why I was lane-splitting “at speed” and the accelerating away from the lights like I did.

“Well, officer,” I lie politely. “I picked this bike up yesterday from Ducati and it’s giving me all sorts of grief down low. It hunts and stutters and is making a hell of a racket. I just gave it a fistful to see if that would help.”

“No, it’s Ducati’s. I ride bikes and write about them in magazines.”

“Listen,” I say, hitting the starter button – which on the Streetfighter (and most Ducatis) produces a fearful wind-up noise which is then followed by the seemingly catastrophic rattling from the dry clutch.

He then takes my licence, informs me he has made his mind up about what happens next and disappears into his car while I kick gravel on the side of the road for five minutes.

He comes back and hands me my licence.

“You’ve got quite a driving record,” he smiles.

“I do a lot of miles, officer,” I reply sheepishly.

“I’ll bet you do. Look, I already said I’d made my mind up and I’m just going to caution you in this instance.”

“I am grateful for your discretion in this regard, officer,” I manage to stutter.

“Listen,” he then says, “I’ll just wait until you gear up before I move off. I don’t want anyone running into you.”

“I appreciate the gesture,” I say, completely nonplussed.

“Mate,” he grins, “I they don’t pay attention to me when I’m behind them with my lights and sirens on, what hope have blokes like you got?”

None – unless there’s a dry clutch involved.