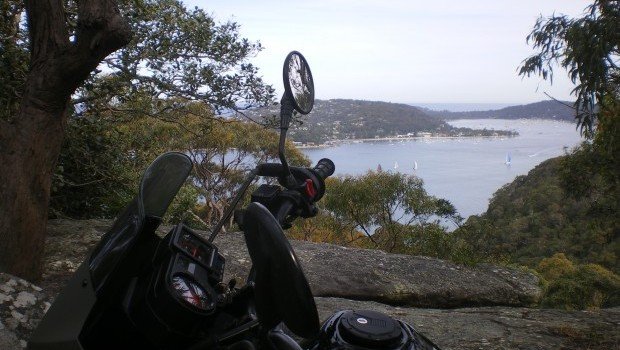 I had been absorbing less than the recommended dose of motorcycles due to business commitments in the weeks preceding the Labour Day long weekend, and I needed to go for a ride. The Honda was indisposed, and I was short on time, so I headed for Akuna Bay in the Kuringai National Park on the KLR650.

It’s only 25km or so from the Harbour Bridge. Liberator General San Martin Drive runs down the hills to the water and alongside it. Near where the rich people moor their boats there is a toll booth, and they charge you $11.00 per day to use the National Park. I don’t mind paying to ride on a twisty road. If I get WAY out of town, I have to pay to ride on a straight road on the way, and it usually comes to more than $11.00. I mind that.

Liberator General San Martin Drive is quite twisty. There are lots of turns signposted at 25km/h and 35km/h. There is one sign that warns of 11km winding road. I like it. The surface is a bit choppy, but I was on a dual-sport bike with heaps of suspension, and the dirt tyres work okay on that chipseal type road.

I turned left at the end and took the road out to West Head, where I stopped for a few minutes and took a photo. The West Head Road is a good road: smooth hotmix with gentle turns. I rode back to Liberator General San Martin Drive. A bush turkey ran across my path and I swerved to try and run over its tail, but I missed.

I headed for home, wondering who Liberator General San Martin was.

I googled him. He was the first president of Peru. He was an interesting man. I read some more.

Peru’s motto is “Firme y Feliz por la Unión”, which translates to English as “Firm and Happy for the Union”.

That’s not just a motto. That’s an entire philosophy.