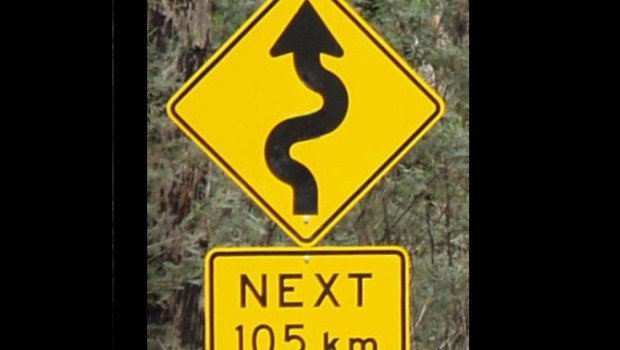 “Look”, said Bly. “He was a nice guy just doing his job, and he wanted to be my friend. People DIE on that road, you know. And the Bonang. You know that Bonang road? Heaps of people die on that.”

I resolved to ride the Bonang Bloodroad the next day.

We were in the service station at Cann River, about 40km south of the Victorian border. I’d seen Bly’s bike on the side of the road a few klicks out of town. I was going down gears when I noticed the guy in the bandanna mask next to him, then the other guy in the same blue cargo pants, then the police car hidden behind them in the bushes.

“He was the operator of the amphometer”, said Bly.

“Why was he wearing a mask?” I asked.

“I don’t know”, said Bly. “Maybe he was horribly disfigured.” He brightened up a little.

“He said he wouldn’t have bothered if I was only doing fifteen over”, he added a few minutes later, “but apparently that last five is a killer.”

“You know what they say, Bly”, said Bluey. “Wipe off five and stay alive.” Bluey can be a smartarse sometimes. No, really.

“Maybe I should go back and thank him”, said Bly.

We restrained him, and rode to Lakes Entrance.

Two of Bly’s friends arrived while we were dining at the RSL club. They complained that they were riding south on the Bonang Highway and there was a Commodore with dark windows in front of them travelling at under the speed limit. They passed it and it started to tailgate them, so they sped up and the Commodore lit up its lights and sirens and cops got out and booked them for speeding.

The others kept on to Phillip Island the next day. I headed back home. The last five or six times I went to the track, VicPol put a roadblock before it and pulled over every motorcycle and recorded the registration and rider’s licence details. Some people think this is okay in a modern western democracy. I don’t. It reminds me of East Germany back a bit. I will try to minimise my tourist spend in the state of Victoria until they stop doing this.

The VFR has a big tank and a good range. I’d topped it up at Orbost. I stopped for petrol at Queanbeyan. “Number five thanks, chief”, I said to the guy behind the counter after filling up.

“Did you call me chief because I am Indian?” he asked me.

I hadn’t, but I said yes to see what would  happen.

“Ha! You Australians are very funny”, he replied.

“And you Indians are so good at cricket”, I told him, cordially.

It was only 300km or so home from there, so I didn’t need to stop again for fuel. I stopped for a drink at Pheasants Nest. I got home about 1530. I hadn’t eaten yet, but I was tired, so I set the alarm on my phone for 1630 and had a nap. I didn’t want to sleep for too long. It’s dangerous. Did you know that one in eight Americans die in their sleep? I can’t imagine the numbers are much different here.

The bedrooms are going to be crowded south of the border when VicPol finds out about THAT statistic.