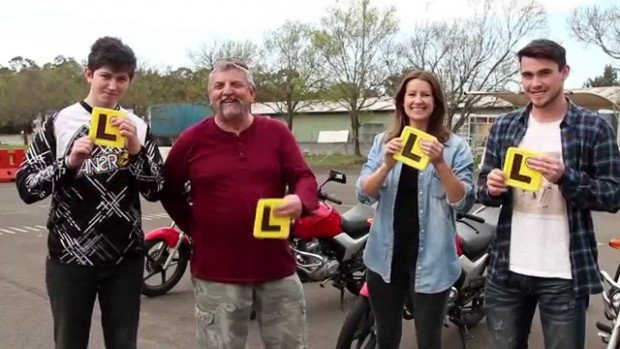 You do know, of course, that L-platers on motorcycles are not allowed to lane-split.

I understand this applies in all the civilised states where lane-splitting is permissible by law to those with a full license.

And I’m thinking this is just the latest act of criminal swinishness by state governments hell-bent on destroying motorcycling in their science-fiction quest for Vision Zero, ie. Zero fatalities on our roads.

As it stands, the Learner Approved Motorcycle paradigm is utter shit, no matter what state you look at it in.

None of the Learner courses offer anything resembling roadcraft and all of them are entirely geared to just getting the punter to pass his test.

If I was cynical, I’d think the state governments don’t really want anyone to ride motorcycles at all, and subscribe to the view that if those queer bastards are dumb enough to want to do such a thing, then let’s not actually teach them anything about staying alive and learning some motorcycle-riding skills. Let’s just get them out there and watch the statistics reach a point where we can easily justify banning that motorcycle-riding bullshit once and for all.

If you happen to be accursed enough live in Victoria and want your Ls, then not only are you taught nothing about riding, you must also wear one of those kill-me-now hi-viz vests as you steadily work your way towards getting those bone-grafts you’ve doubtlessly always wanted for your 18th birthday.

The Victorian ruling class and its black-uniformed bouncers have mandated the wearing of hi-viz vests for Learners for no other reason than it makes the riding of bikes terribly uncool at a time in a person’s life when cool is everything. There is no science behind this at all. In fact, there is science that categorically rejects the notion that wearing hi-viz clothing makes one more visible on a motorcycle. But since Victoria models itself on a medieval caliphate, it has no need for any of that science stuff. All that is required is compliance.

Wear the vest. Pass the test. Never mind the road-craft.

But as we scarred old bison know, roadcraft is what keeps you pretty for the ladies. Weaving through witch’s hats and stopping in painted boxes is all well and good, but if you can’t read traffic, and you don’t know where you should be on the road, or how you need to behave when you’re on it, then there’s certainly a cannula in your future.

And a very big part of roadcraft is lane-splitting.

You can call it lane-filtering if you like, or you can refer to it as “threading the needle”, which is a rather more apt description.

But it’s just the act of riding your motorcycle between cars, both mobile and stationary.

Firstly, it means you no longer sit in traffic, which is dangerous for you.

Secondly, you no longer travel at the same speed as the surrounding traffic, which dangerous for you.

Thirdly, you’ll realise how many droolers are texting on their phones, which is dangerous for you.

And fourthly, you’ll be able to see lots of pretty girls’ legs in short skirts, which is probably the most dangerous thing of all for you.

But Learners are not allowed to thread the needle.

Which is strange, don’t you think? Surely the label “Learner” indicates that a person is “learning”, does it not?

What exactly is the Learner learning as he sits in traffic waiting to be rear-ended by some killer blonde updating her Facebook status?

I don’t know, but it isn’t roadcraft.

Maybe he is learning precisely what the government wants him to learn as it sails towards Vision Zero, ie. Motorcycling is a dangerous and stupid thing. There are no advantages to it at all. You sit in traffic with the rest of the mongs. It takes you just as long to get to work as it does that bloke in the S-Class Merc, and he has German air-conditioning and seats that massage his anus, so what kind of smelly loser must you be? Best you reconsider your life choices and buy a car. It’s what all the cool kids are doing, you know. None of them have to wear a hi-viz vest. All of them can text to their heart’s content (we really don’t give a shit about that, because if we did we could stop it overnight) and thus stay socially viable. Those terrible motorcycle bastards with full licences you see zipping in between lines of cars? Don’t you pay them no mind. We don’t want you learning such things. Such things are not for you to learn.

What you must learn is that you are a “vulnerable road user”. You are a “temporary Australian” and that “speed kills” and that the police have you constantly “in their sights”. And while we’re keen for you to be trained to kill people on command with a high-powered rifle, we’re not going to let you learn any roadcraft. And we’re certainly not going to permit you to ride motorcycles with superb suspension , brakes and handling because you need to learn your place in the general scheme of things first.

And the first thing, the super thing, the thing of all things is SAFETY.