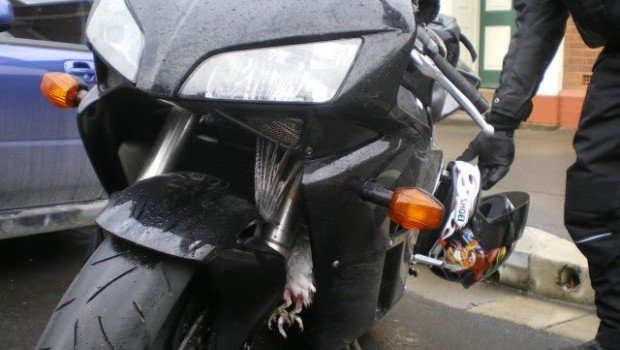 I rode with Bly and Lee to Lithgow and Tarana and stopped at the servo at Kelso to fill up. It looked cloudy down south. I checked the weather on my Blackberry. I had planned to go as far south as Goulburn. “Forecast for Goulburn is a late shower,” I said. “Let’s go”, said Bly.

We went out of Bathurst on Vale Road, and through Georges Plains and Barry and Neville. We got on to the Mid Western Highway. It started to rain. We turned off at Lyndhurst and got onto Reg Hailstone Way at Woodstock. It was wet and foggy, and our visors misted up.

We stopped at Wyangala Dam.

“On the plus side, the ambient temperature has gone up one degree since we left the highway,” I said.

We fuelled and kept riding. The Reg Hailstone Way and the roads thereafter are a great ride. I’ve never done them when the road was dry all the way, but I’ve always enjoyed them.

After a while, I thought I had a flat tyre, because every time I would lean the bike over a bit it would slide, but it turned out that it was loose stones on the road.

We stopped at the Crookwell Hotel.

Lee asked me to photograph his bike, so I took some photos of it. 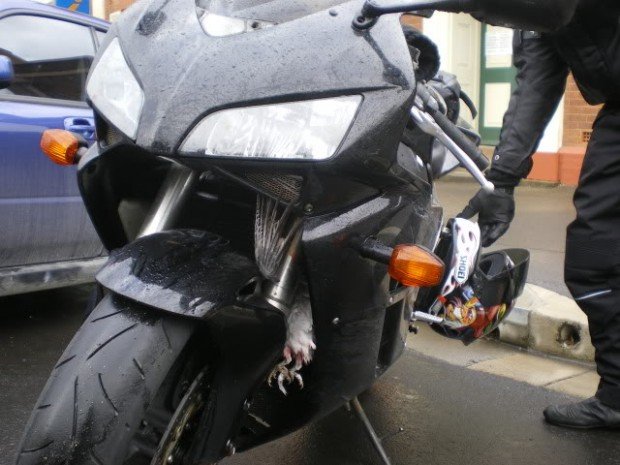 Lee took his kill down to the garbage bin and interred it. We went inside and had steaks and beer and stuff.

We called Boris and Daz softcocks for staying in bed with warm women on a bracing day like today, and Lee told us what it was like to hit a galah at a hundred and er, something km/h. I kind of knew, because when we came this way the last time I hit a galah with the rear view mirror of my VFR, and I was told it made a spectacular feather explosion.

We rode to Goulburn for fuel, and then came back via the Doom Highway. We got to a part which was really congested, and Bly set a very bad example by lane-splitting like a man possessed, and of course we followed his example, because we are weak and irresponsible and easily led.

When we stopped, we were in Sydney; which was good, because that’s where I live.