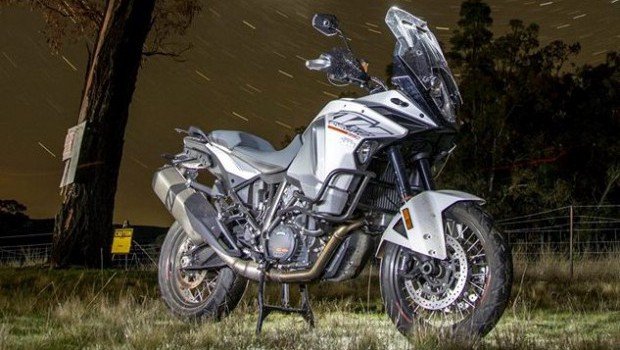 I am told it is the Language of Command. It is the only language that the Schäferhunds are taught to obey. It frightened me, so I found the lock and took off the seats, but there was no owner’s manual anywhere that I could see. The seats went back on with a click like a pair of bootheels, and I thought I heard a chuckle from the direction of Mattighofen.

Boris had showed me how the computer worked. When I turned it on it gave a warning about how Tyre Pressure Management System had failed, but Boris said it was just some kind of Austrian joke that I wouldn’t understand and to just ignore it.

So I put the suspension on Comfort and the engine map on Sport and rode to work. My boss asked what it is like. “Mother of God!” I told him. “It weighs about as much as my Honda but it makes a hundred and sixty horsepower. The power is EVERYWHERE. It’s hilarious. If I had one, my licence would be toast in fourteen days.”

I showed him how the computer could adjust the suspension, and showed him the seat heater and the hand heaters and how the little headlight on each side swivelled when you leaned over and showed you the way. He said “What does THAT knob do?” and I told him I had no idea, and he turned it and the windscreen moved up. I said I hadn’t worked out what the buttons on the right did yet but I thought it was something to do with the backlight on the instruments, and he told me it was a cruise control, and indeed it was.

The fuel gauge showed two bars on the graph, and there is a readout on the computer that told me that I had a remaining range of 130km. I went to lunch on it, and on the way back the engine cut out on a six lane highway. I pulled in the clutch, and coasted up on to the sidewalk and tried to start it and it started fine. I got back on the six lane highway and it cut out again after a hundred metres, and I coasted up on to the sidewalk and it started again.

I thought I heard a titter from the direction of Mattighofen.

After a while, I worked out that the sidewalk sloped up where I hit it, and the six lane highway sloped down, and I figured it was low on fuel and the pickup was at the rear of the tank and the computer was lying to me. I know they do that. I managed to get to a service station five hundred metres away using momentum and gravity, coasting in on a dead engine.

The thirty litre tank took twenty six litres of gas, and I gave the gas-wallah forty bucks and thought I would be really pissed off if it didn’t start now, but it was back to normal, and told me that the Tyre Pressure Management System had failed. I was having no truck with Austrian jokes, so I ignored it. I addressed it in its own tongue, the Language of Command. “Beiss mich nicht!” I said, sternly.

I heard a sound come from the direction of Mattighofen. It sounded like water gurgling down a drain.