In a world where superlatives (and clichés) are bandied around like confetti (!?!) I thought it necessary to give a definition of the word ‘hero’- a man of distinguished courage or ability, admired for his brave deeds and noble qualities.

Believe me – it fits and I can prove it.

When I first thought about writing this little tome I had reckoned it would be a piece of piss to knock up a list of the achievements of Joey Dunlop to illustrate the success of he who was affectionately known as ‘Yer Maun’. This would have been a disservice to the memory of the man who was so much more to so many people than the greatest road racer who ever threw their leg over a bike. It would also be a disservice to leave such racing achievements out so here they are. 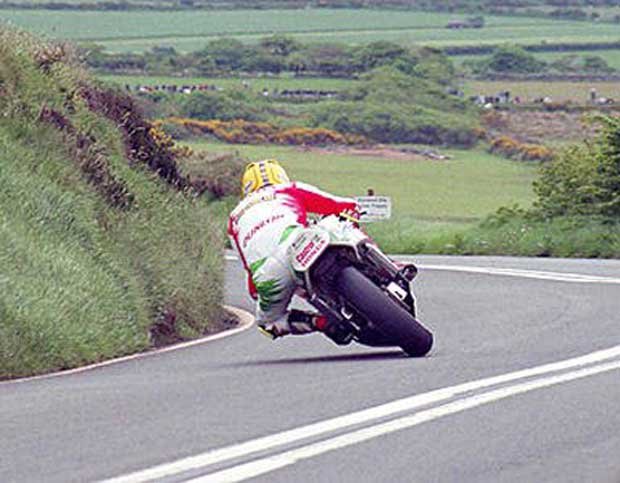 Joey on a ‘quack one’ at Kates’s

Now that is dispensed with I can get on with the real point of the piece.

I watched the guy race from 1977 to 1996 at virtually every track in the British Isles. I saw him compete on machines from 80cc to 1200cc (often in the same nightly practice session). I listened to the stories the old codgers told each other of Yer Maun’s exploits while they sheltered from horizontal sleet in ditches waiting for the Marshall’s whistles to announce the imminent arrival of a bunch of mad bastards screaming ‘balls lit’ at silly speeds over closed public roads. Public roads with cow shit on them. Public roads with telegraph poles. Real ones. Hard and unforgiving ones.

When I was but a young buck my weekdays were spent at school learning the many things that would be invaluable in my future life. Algebra and log tables spring to mind. Weekends were spent attending road races or short circuits around the country with my mate and his father. The smell of two stroke, Ginger Nuts (the biscuits not the gonads) and stewed tea are burnt into my memory.

My ten-speed racer had a length of yoghurt pot stuck through the spokes (a BIKE ME! disciple even back then) firmly secured with a clothes peg. It also had a very very trick bit of kit. A piece of black cardboard with a number ‘3’ on it. I found this ‘3’ in a muddy field that was being used as the pits at a roadrace . It was actually the backing bit of a race number and I found it not 10 feet from Joey’s transit van ergo it had been his. As much as the red t-shirt and yellow helmet were lucky talismans for my hero this was to fill the role for me. 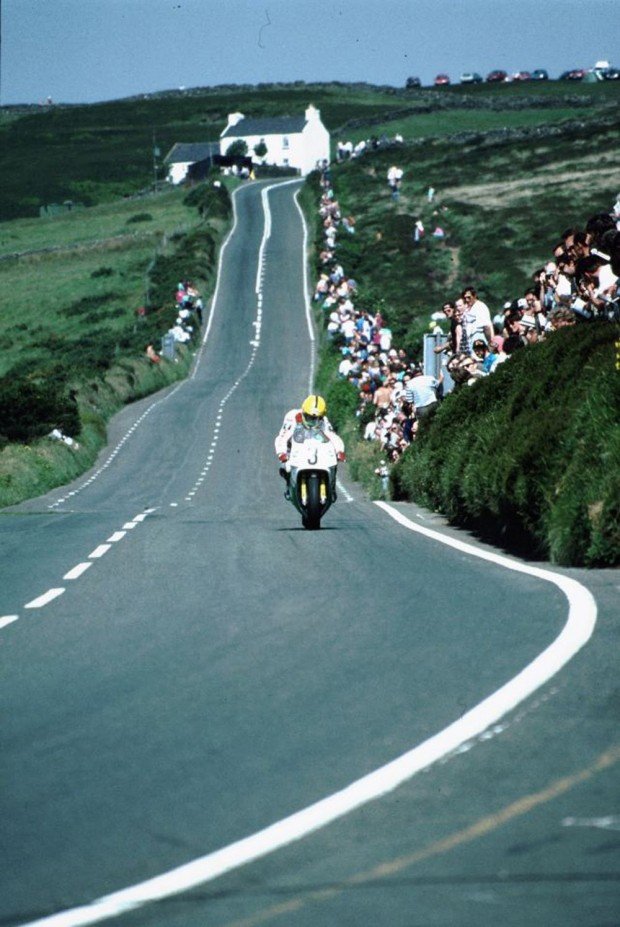 I worshipped Joey. I followed his every race and result in the papers and had scrapbooks full of cuttings from “the Tele” . Truth be told — we all worshipped Joey. Every person who had ever seen Joey race could do nothing else. He had so much courage and natural ability. However there was another reason we all had a special respect for him. Joey was such an unlikely hero and simply had difficulty getting his head around how people thought of him. Since he was a very solitary man the main source of his character were handed one man to the next in the form of Joey Tales — stories related often in hushed reverence or stifled laughter between the faithful. Some of my faves:

Local cops always seemed to turn a blind eye to the high-speed antics around Joey’s shed. Anyone who has seen “The Road Racers” film will remember the local farmers blocking off the pigshit caked roads to stop the cops from apprehending members of the Armoy Armada as they shook the bugs out of the setup before the NW200. In later years Joey was often to be seen riding a works RC51 to the local shops to pick up fish and chips that were jammed between the tank and the screen for the trip home.

A reporter once pulled up outside Joey’s house and realized he was at the right place when he saw all the local kids playing in the sandpit with Joeys F1 world championship trophies.

At Assen (circa 1984) Joey was due to ride in the F1 race but as usual had been out on the turps the night before with the other riders. Nowhere to be found before the riders briefing a search party was formed and Joey (the current World Champion) was found asleep under his battered old Ford Capri in a paddock behind the pits.

In the late 90’s Joey fell in love with Australia and started to visit during the northern winter. By this point in his life the years of smokes, pints and Ulster fries had taken their toll on the ageing bones of our subject. Joey gave up smoking (this from a man who used to pull on 2 Embassy Regals simultaneously during pit stops) and got fit. Having borrowed a 400 Honda from a mate in Brisbane Joey went for a ride. When pulled over by the cops it is alleged one officer looked at the yellow helmet and said “Who do you think you are — Joey Dunlop?” The response was appropriately given and followed up by a celebratory BBQ at the local cop shop that very evening. 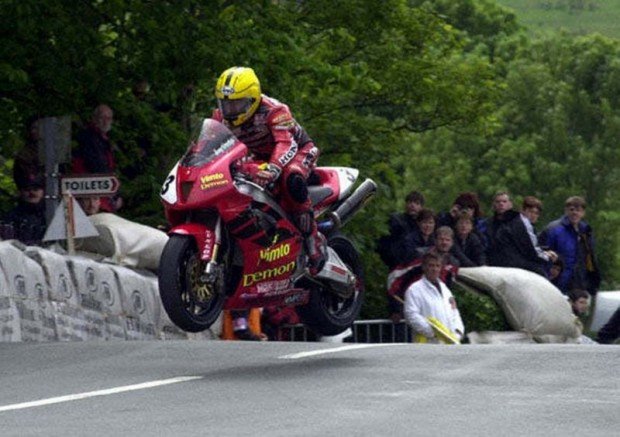 Always a superb bike technician Joey always had to have a hand in setting up the bike and was never happy unless his hands were dirty. When the first works rides came along much hilarity ensued when Japanese HRC technicians were given top quality feedback such as “There’s still a wee bitta ‘jinklin’ in first and second hey”.

Being from North Antrim, Joey was thrifty. He usually drove a diesel Ford Escort that had seen better days. When presented with a VFR750R RC30 by Honda on television the night before the NW200 Joey had the bike stripped down and the bits sold to the highest bidder by 7am next morning.

When a local nurse who had been first on the scene after the fall of communism in Romania told Joey of the conditions in the orphanages, Joey decided to post some blankets etc. Being horrified at the price of postage Joey decided to take the stuff over himself. I saw him at local races walking around the crowds with a bucket brimming with notes. When Joey walked past the wallets emptied. All the bikes were taken out of his truck and it was filled to the rafters with food and medical supplies. Sleeping arrangements involved a wooden board and a sleeping bag — no motels for this bloke.

Meals consisted of cold baked beans (maybe in an attempt to keep the sleeping bag warm at night?) On multiple trips to Eastern Europe he took tonnes of supplies, was arrested, locked up, interrogated and threatened. Still he went again and again with quiet purpose, as was his wont. Many people who knew he received an MBE for services to motorcycling thought he got the OBE for the same. He actually got the OBE for this low profile charity work. 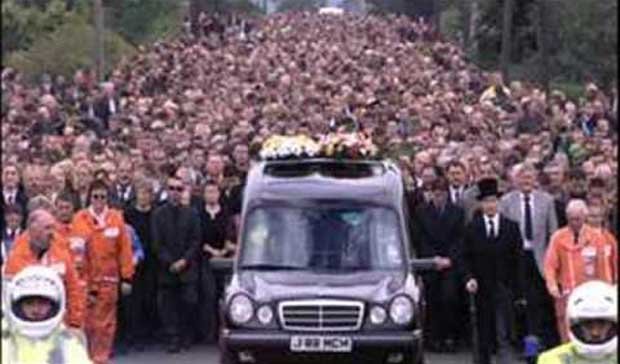 Slick Bass (Carl ‘the Twat’ Fogarty’s senior mechanic) reported a drinking session at Casa del Joey that ended with the opening of a bottle of poteen (Irish moonshine — 80% alcohol by volume and up to 160 proof). Slick quickly poured the glasses he was handed into a nearby potplant which was completely dead by next morning much to the chagrin of Joey’s wife. 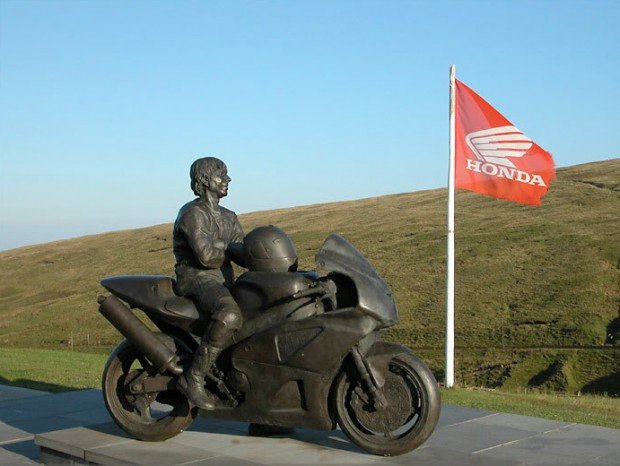 My favourite story about “Yer Maun” is a more personal one. In the mid 1980’s I was standing with a mate in a field at the Cookstown 100. It was raining. I say this for the benefit of people who have never been to the Cookstown. Anyone who has will be unsurprised. It is an immutable law of nature: Cookstown 100 = torrential rain. Being that it was cold and wet and miserable most people sensibly stood under whatever shade was available or had brought tarps with which to temporarily stave off hypothermia.

However being young and having an adequate supply of body fat due to the consumption of local delicacies such as fried bread and sautéd lard yours truly was in a hedge. Nothing like a 2stroke 350 screaming past at very close quarters to warm the cockles. While passing comment to my mate at how well Robert’s (Joey’s brother) bike was going a shadowy figure behind us said “aye it should be — I was up to four this morning strippin it”. It was he.

We were in the presence of a deity. Alternating between dumbstruck silence and gabbling enthusiasm we spent a good 20 minutes talking to the current F1 world champion who was wearing a ripped and greasy Honda anorak in a field in the middle of nowhere with bikes hurtling past not 3 feet away. There was nobody else in view. Nothing else mattered. I was 13 and I was experiencing heaven. In later years the true importance of this encounter struck me more and more. I was a nobody, my mate was a nobody and we all know what annoying arseholes 13 year olds can be. But what we were doing showed our love of the sport and that was what mattered to all 3 of us.

In conclusion lets go back to that hero checklist:

I rest my case.

I finish with this thought — from the mouth of the man shortly before he died in 2000.

“I never really wanted to be a superstar. I just want to be myself. I hope that’s how people remember me.”