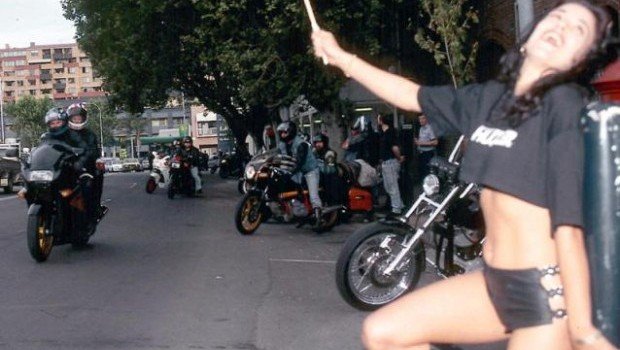 DID SOMEONE SAY “CANNONBALL”?

I first wrote the story of this event in 1996, the year it happened. The story was slated to appear in the launch issue of RALPH magazine, but was pulled at the last minute to appease advertisers who were concerned at the subject matter. Eleven years later, and with the advent of BIKE ME! I felt the time had finally come for the world to know about the most unique motorcycle event ever staged in this country. The story below is pretty much as I first wrote it, though I have taken the opportunity to tweak it so that it suits the website format a little better.

It was a hell of an idea. 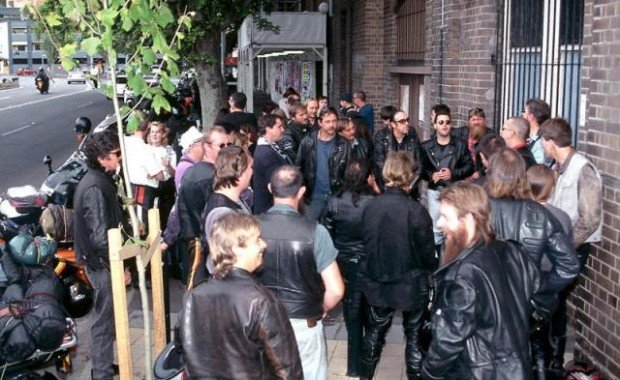 The pre-race briefing was pretty lively

An amount of motorcyclists would gather at a given place in the Sydney CBD on a Friday evening. If you were one of them, you would have paid $100 for the privilege. Then at exactly 6pm, you would ride your motorcycle 925 kilometres from Sydney to Jupiter’s Casino on the Gold Coast.

If you were, by some bizarre twist of fate, the first to arrive at Jupiter’s, you’d collect $2000 for your efforts. Then you would gamble heavily and drink like you were leaving Las Vegas for the very last time. Perhaps you would find yourself drinking beer off the floor and chasing naked sheilas around dank nudey bars as well. Anything could happen on an event such as this. It would be dangerous and it would be lunatic, but it would also be fun.

And there were no rules.

And it made the police profoundly and deeply mental. 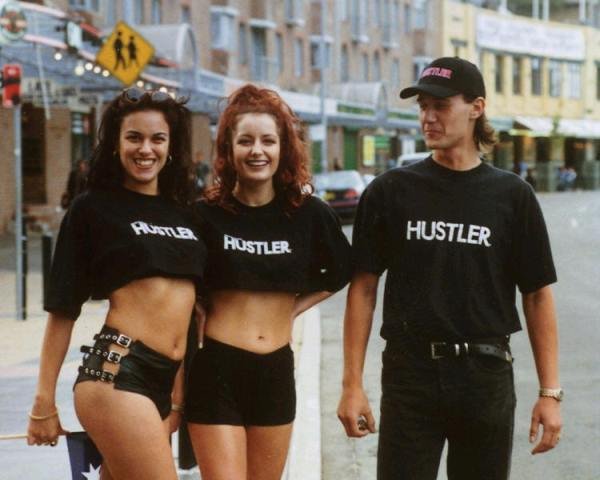 In fact, the police were very upset and deeply mental at the same time.

That they were in a state of profound discontent was obvious by the way they kept driving up and down in front of Harry’s Café de Wheels, all bitter and twisted with cameras.

I had chosen Harry’s as the departure point for our Le Man’s start because a) it was a Sydney icon; and b) it was packed with peak hour traffic.

So there we were at 5.30 pm. The cops and the 50 entrants, watching each other watch each other. 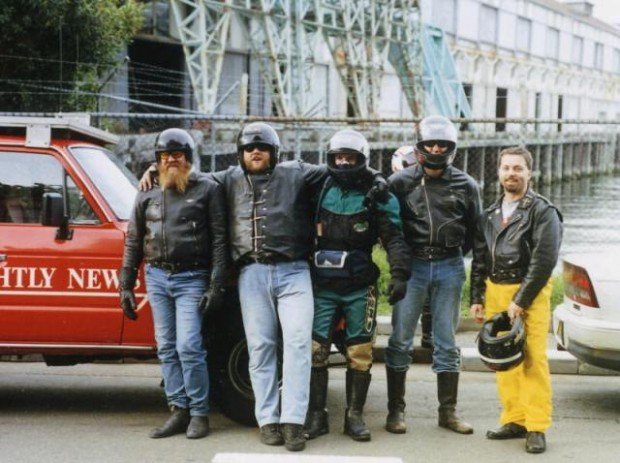 Only two of these blokes ever spoke to me again

The cops were obviously gathering further “intelligence” — to go with the “intelligence” they had already acquired. This “intelligence” informed them that exactly 300 to 500 outlaw bikies, aided and abetted by promiscuous sluts, were manifestly up to no good. Further more, the “intelligence” advised that these bikies, all maddened by industrial-strength methamphetamines and riding stolen motorcycles were planning to conduct a Cannonball Run race-type thingy and distribute the aforementioned methamphetamines in the process — any second now. This was pretty major shit as far as the cops were concerned. Stuff like this engorges their penises with rich blood. There could well be the odd high-speed pursuit in the offing. And maybe even some overtime. 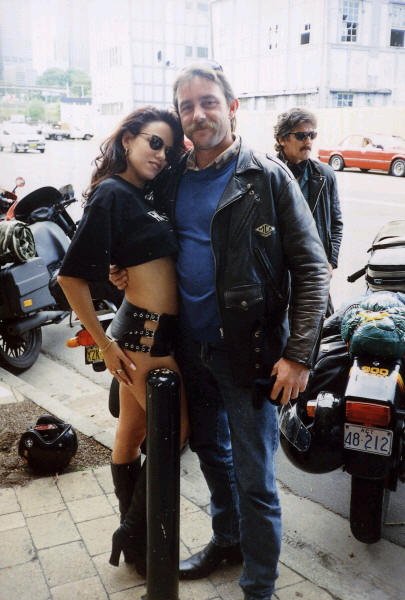 Werner’s pillion tested the girls for firmness of arse

Exactly how 50 people, most of whom had never met before that day, were meant to distribute drugs while simultaneously engaged with racing their bikes through the night was never explained, but that was the deal at the time.

And it all looked pretty downright nasty.

So they watched us, and we watched them watching us and wondered what that bastard Boris had dropped us all into. Even I was starting to wonder what the fuck it was that I had done. Then at exactly 6pm, five-and-a-half feet of poisonous sex princess from the pages of Hustler magazine went live. She stalked into the middle of the road in fuck-me heels and tiny leather sex-shorts, and waved a little Aussie flag at us.

The Le Mans start — as you can see I ran quickly

Immediately, in a classic Le Mans start, all 50 riders began waddling across four lanes of traffic to their bikes, which were parked across the road.

And then it was on. The Jam had begun.

I still hold it to be a miracle most of us weren’t made into roadkill in those few seconds, but luckily, the sex princess was the focal point for car drivers that evening. Understandably, given she was standing in the middle of the road with the waxed edges of her reproductive organs peeking from her shorts. And as the cars slowed to assess them, we 50 road warriors hit it. 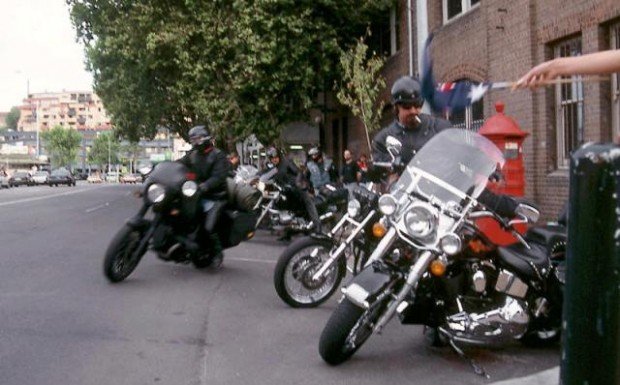 The Hezbollah Express is launched!

Drivers in the Harbour Tunnel were quite suddenly treated to an international array of freshly fuelled two-wheeled weaponry hammering past their car windows… closely pursued and eagerly awaited by what seemed like every single cop that had ever crawled out from under a mossy rock.

But more of that in a minute.

Right then, everything from long-haul custom Harleys delicately punted by dealer mechanics to hot-shit ‘Blades straddled by Greeks with cobras painted on their helmets, was getting out of Sydney in the most efficient way possible.

Except for me, but more of that in a moment, too. 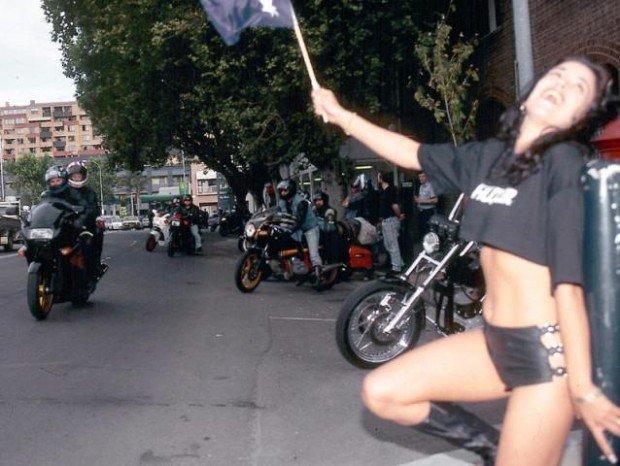 And away we go. The starter was rubbing her arse against a post. That is why she is happy

There were 250cc slingshots smelling of screams and two-stroke terror; nasty big Cosworth Triumphs made outta carbon-fibre and ridden by priests with long hair and a taste for bourbon; great electronically enhanced Suzuki Cavalcades with “Grow Old Disgracefully’ stickers on their panniers and Pavarotti on their stereos; ultra-fast ZX750 Kwakas piloted by future World Superbike champions who’d arrived from Brisbane five minutes before the start and were now going straight back (these two blokes frightened the shit out of me); late-model BMWs bristling with uber-designed Teutonic technology; old bikes, new bikes and bikes that were much faster than they looked — in short, the entire gamut of Australian motorcycling.

And then there was my own personal riding rig — T.H.E., or The Hezbollah Express — which minutes after the start was being ridden haphazardly through the back alleys of Artarmon by one dumb, wrong-turn-taking, no-attention-paying twat, me.

I still would have looked hell cool, but. T.H.E. was an utterly matte black BMW Boxer with a warm S motor, twin 100watt spotties and a 40-litre Heinrich tank that gave it a range of 550kms. Most bikes have the fuel capacity to do between 250 and 350kms, which means the rider is only in the saddle for about three hours or so. The he has to stop, which is good, ‘cos that’s about when things that don’t exist start appearing on the road in front of you. Scary things.

There aren’t many riders out there who can ride non-stop for six-hours straight. But there was gonna be one that night — and boy, was I ever pleased with myself when I set off! I’m a fucking hero, I thought, hurtling down the Gore Hill Freeway. I’ve got the rest of these blokes buggered. I got away in second place and I saw the bloke in front of me getting booked, which means that I am in front and because I don’t have to stop until I hit Coffs Harbour, I am a fucking genius.

Then I got lost in Artarmon.