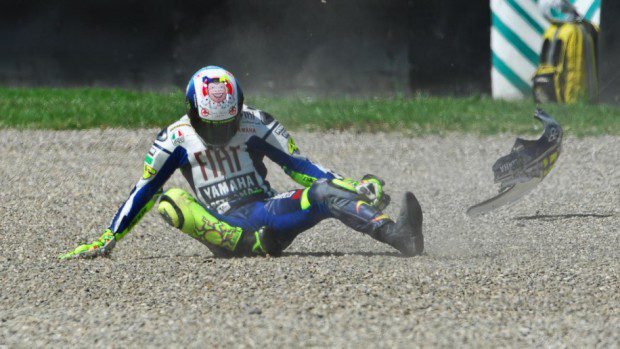 I will say it again.

How does it feel to see your 2017 season turn to dust?

How does it feel to see your chance of ever winning a tenth world title get flushed down the baño once again?

See how it goes around and around in the bowl? Your career is just like a smelly yellow zurullo that’s been snapped off by your culo and has been waiting to be swept away by the water when someone pushes the flush button.

I am the finger that pushes that button, puta!

How does it feel to have your stupid fibula explode, destroy your stupid tibia, and shred all those weak 38-year-old leg-muscles in your skinny puta legs?

I’ll tell you how it feels from where I’m sitting. Magnificent. I think I have maybe made a little esperma in my pants when I heard.

It’s as if you and Iannone and Marquez and Dovizioso and Vinales all crashed into each other and exploded into sizzling meat-porridge during the last race of the season which I then won and became world champion.

No, wait…that would be even better. But this is pretty good.

Does it hurt? I think it does. Did you cry? I think you did.

Oh Dios mio, I have not been this happy since the last time you broke your stupid leg. That’s what you get for always waving that leg at everybody when you go into a corner.

You ride like a goat having a fit. If you were smooth like me, if you were more like butter and less like a broken washing machine falling from a tree, this would not happen to you. I tried to tell you this when we were team-mates. Did you listen? Nooooo.

Yes, you’re lying in hospital and being cut open by masked men with small knives. And then they will give you drugs for the pain and all your mierda will turn into concrete and you will be so constipado your stupid monkey ears will turn red when you try to move your intestinos.

And you must move your intestinos before they let you out of hospital. And you won’t be able to.

This is a great day, Yellow Puta.

I’m going to go to Misano soon. And I will race my Ducati. And you will not be there to see it.

And that will be an even greater day.