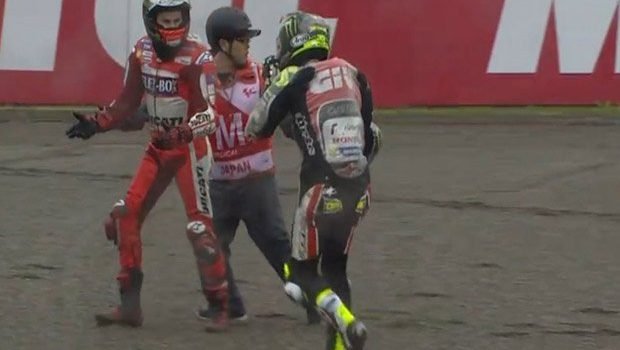 “I didn’t want him to get turned into meaty monkey-paste courtesy of HRC and your constant inability to keep a motorcycle upright.”

It’s Gigi. Sorry to bother you, but it appears you killed George’s special Best Luck Racing Monkey, Ucciccio, when you threw your Honda at him in Free Practice One this morning.

As you can imagine, George is going to pop like a lanced boil when he finds out. You’re lucky he didn’t realise Ucciccio was dead when he started yelling at you in the gravel trap. He might well have gone for your throat.

We only worked out Ucciccio was dead when we got the bike back to the garage and opened the special box (behind George, on top of octopus, and just to the left of the telemetry and the Mambadromic valves) that we made for Ucciccio to ride in.

It was not a pretty sight. I didn’t like the screeching, pissing little bastard, but I didn’t want him to get turned into meaty monkey-paste courtesy of HRC and your constant inability to keep a motorcycle upright.

I scraped Ucciccio’s remains into a rubbish bag and hid the bag under a pile of pallets out the back. I’m hoping the Japanese don’t find it, but you know how OCD they are about keeping everything clean. I think we may have a day or so before Ucciccio starts to smell, and with any luck, we’ll be on a plane to Australia by then.

My most pressing concern is that George not find out about Ucciccio and your role in his terrible death. At the moment, he’s just happy with the fact he’s riding faster than Rossi, and he’s trying on different capes and posing with his spears in front of the big mirror in his hotel room.

With any luck, he won’t even remember he had a Best Luck Racing Monkey. But you never know. I think I can distract him for a while, but if he doesn’t do well in Qualifying tomorrow, then he might demand Ucciccio be brought to him for inspiration.

And then we’re both fucked. You first, because I will shop you so fast you won’t have time to blink those shit-mad eyes of yours, and then he’ll come for me.

You might want to consider this the next time you feel like low-siding your second-rate Honda when you’re riding behind him.