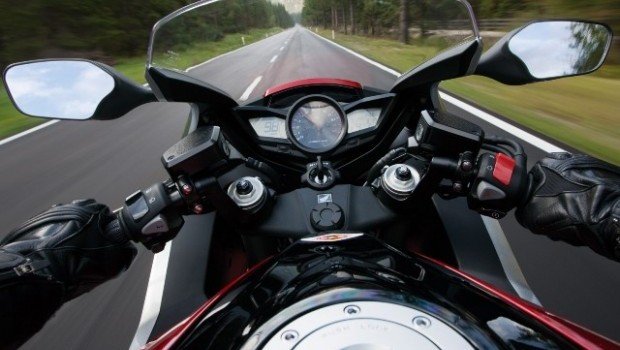 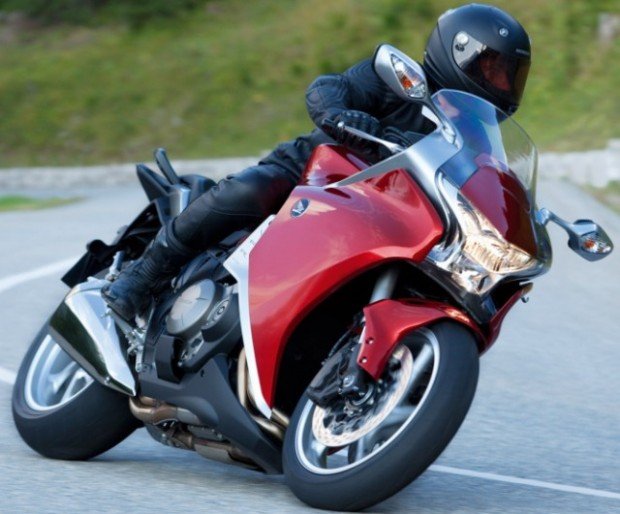 I picked the Honda VFR1200 up from Sydney, two days before Boris’s annual Pilgrimage to the Mountain. It was long and low, like a VFR should be. I mounted it, started it, and with a merry toot of the horn and what the police call “not signal intention”, I turned into Goulburn Street.

I’m not the type who generally indulges in merry toots of horns, but Honda have improved the VFR’s switchgear by switching the positions of the turn signal switch and the horn button. I can imagine the meeting where THAT was decided.

“Thousands of people are buying BMWs, and the only reason we can put it down to is that they have these really stupid indicator switches.”

“How stupid are they?”

“Sounds complicated. How about if we just put the turn indicator where the horn button is, and vice versa?”

“Fantastic. We’ll sell a million of them.”

Once you’re rolling, the new Viffer is light. It’s got a bit of a sudden power delivery, though, and I had a moment when I thought a less ancient rider might have accidentally speared into something. Because it makes BULK power low. It makes a shedload of torque, and it makes ninety percent of its peak torque at 4,000 rpm. 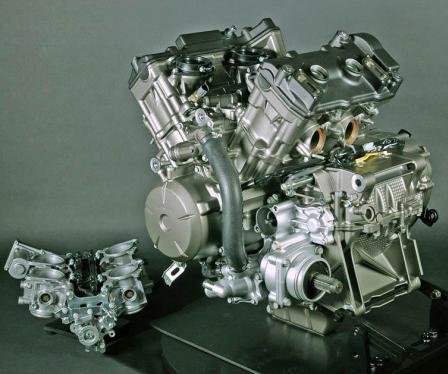 The VFR1200 motor: shorter and narrower than the 781, shaft drive means swingarm is no longer engine-mounted

You won’t buy it to commute. It’s geared tall to take advantage of all that torque. Trickling along in traffic when there isn’t an open lane split means slipping the clutch. Once you can lane split it’s OK, because it steers light and it’s narrow. The old 800 was narrow. The 1200 motor is shorter and narrower, believe it or not, and they’ve run the two rear cylinders on the inner crank throws so it’s even narrower where the rider’s legs go. Even if the traffic’s moving a bit faster than clutch-slipping speed, the electric cooling fan cuts in a lot. The Viffer works hard to stay cool in traffic.

I decided not to join Boris’s ride to Sofala. I decided to execute a flanking manoeuvre by riding to Denman and meeting with BIKE ME! members Quoll and Whale and riding the magnificent Bylong Valley Way to Rylstone, Ilford and thence the barely inhabited old mining ghost town of Sofala.

I left Sydney at 0645. It was 8 degrees centigrade. The big Viffer is hard to ride inside suburban speed limits. It leaps away from traffic lights and passes 60 km’h in first before you’re ready for the first change. The VFR800 can trickle along a gear too high, but the VFR1200 isn’t good at that. If you’re in a 40 km/h school zone, you’ll be in second. If you’re in a 50 zone, second or third; an eighty zone third or fourth. And when you get on the expressway, sometimes you forget what gear you’re in and stay a gear or two, or even three, too low. Previous VFRs never had a gear position indicator on their dash. This one does. Well done. It needs it.

Because the Viffer motor has that glassy smoothness that reminds me of the Triumph Speed Triple. There’s occasional vibration under load that’s more of an encouraging reminder that there’s all sorts of mischief waiting to be unleashed than a comfort issue. And when you hit 110 km/h on the expressway, the engine is making that 90% peak torque number, and it is ready to overtake like forty bastards.

Somewhere around this engine speed, a solenoid opens a flap in the bowels of the muffler, and the note changes. It’s a mellow V4 growl that works for me even at low volume.

I turned off after thirty or so kilometres to head over the mountains to Wollombi and Broke. It was slow. There was a bit of fog, and the sun was low and in my eyes a lot of the time. The temperature dropped to 4 degrees centigrade.

I was okay behind the fairing, though. Honda are proud of the fairing on the VFR1200. At 100 km/h, you’re in a still air pocket except for the outside couple of fingers and the top of your helmet. My hands still got cold and numb, because it was 4 degrees inside the still air pocket. I put my left hand down on the outside of the fairing where the radiator is exposed on the VFR800. There was no radiator there, and the fairing was cold. It struck me that this is where the Honda’s Antilock Braking System would save skin if you had to stop suddenly: you’re likely to be in trouble not because you misread the surface, but because your hands were numb. And it struck me at the same time that heated grips were probably a safety feature for the same reason, and not just gay.

My road to Wollombi was my road to Damascus. 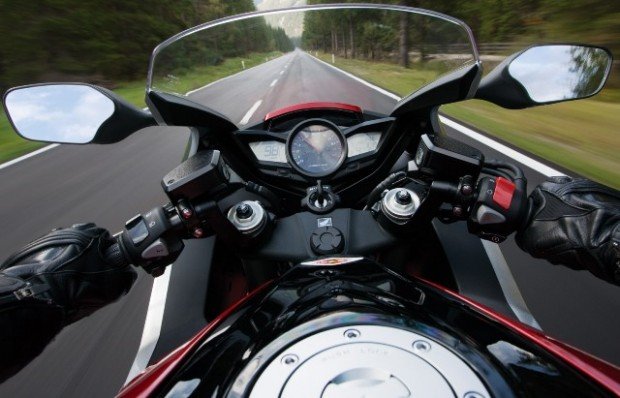 Cockpit-eye view of the VFR1200

I played with the shaft drive. I turned the throttle off and on in low gears to see if the back went up and down. It didn’t that I could detect. Honda say this  is because the transmission output shaft is below the swingarm pivot. It seems  to work. It means that the effective length of the drive shaft changes as the  suspension moves, but Honda have put a constant velocity joint on splines on the  shaft, and sorted the issue. 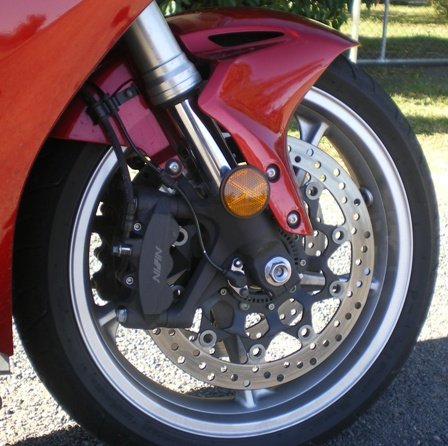 The brakes are fantastic. Like those top-end Brembos and such. I didn’t know if the VFR1200 had the Dual Combined Braking System that the 800 had. Crusty motorcycle journalists hate it, but I think the DCBS on the VFR800 is fantastic, because it works really well. I tried to work out whether the VFR1200 had it as well. It didn’t dive like I would expect under brakes – the DCBS is known to combat braking dive. If I braked hard using the rear brake only it stopped better than I would expect, but that could be the ABS (which my personal VFR800 doesn’t have). I suspected the brakes were linked. 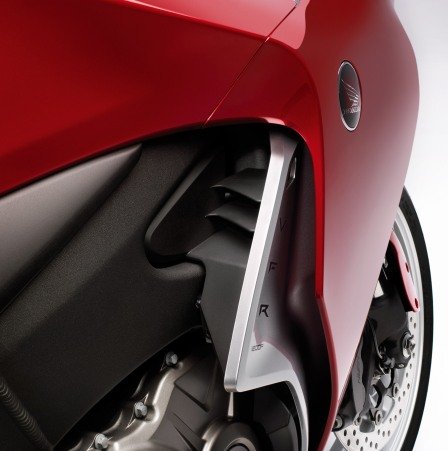 Paint is deep and lustrous, fairing fit and finish is excellent, fairing is two-layer shell

Later, I looked it up. They are.

It warmed up. The roads straightened out. The fog lifted. You’re in that same still air pocket at 140 km/h that you are at 100 km/h. And at 160. And at 200. This motorcycle feels pretty much the same, comfort-wise, at 200 km/h as it does at 100 km/h. Honda say they used a lot of their GP development work in designing the fairing. It shows.

I played a little more as the roads straightened out. The VFR800 starts to run out of steam as about 230 km/h. The VFR1200 doesn’t. The 1200 is stable at high speeds. It’s got 80mm more wheelbase and 2mm more trail than the latest VFR800. I am told that the rev limiter cuts in early in sixth gear, limiting top speed to 250 km/h. I didn’t get to test the veracity of this.

I stopped at Denman and met BIKE ME! member Oldgriffo on his Speed Triple. I’d been on the bike for two and a half hours and had covered 220km. I was still comfortable. The VFR1200’s seat and ergonomics are as good as the 800’s. Quoll arrived on his BMW R80 Q-ship, Whale on his CB1300 streetfighter, and JJ on his Suzuki Bandit 1200 while I was walking up the road to get coffee.

I finished my coffee and checked the tyre pressures. The front was at 30 lb/in2. That explained the oversteer. I added 6 lb/in2. The rear was 38 lb/in2. I added 4 lb/in2. The others made noises about going. I told them to go and I would catch up.

And I set off in hot pursuit of Quoll, Whale and their companions.

It took me 50km to catch them. I crossed the mountain range after Kerrabee and what I’m used to as second gear corners on the VFR800 are first gear corners on the 1200. It’s the start of a seriously challenging part of the Bylong Valley Way. The VFR1200 has an extra 23kg kerb weight over the VFR800. You don’t notice it. I suspect a lot of this is a result of weight centralization: things like that weird-looking muffler, which looks weird in part because its weight is closer to the bike’s centre of gravity than most other mufflers.

The steering is almost perfectly neutral with correct tyre pressures. The brakes are fantastic, there’s more than enough power to haul an extra 23kg, and it turns well. The tyres are Dunlop Roadsmarts, which I’ve always liked for their wet grip and for the way they recover from slides. The suspension is plush but well damped. Big bumps on high speed sweepers are just swallowed. They never affect the line. Which is just as well, because like the VFR800, the only fork adjustment available is preload.

The forks are more rigid though: Honda have finally put upside down forks on a VFR, the skinny bit is shorter, the forks are stiffer.