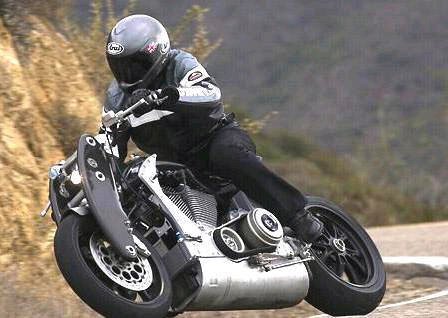 HISTORY OF THE FRONT END – PART I

And they saw that it was good.

Then they saw that the only thing better than adding a small internal combustion engine to the bicycle was adding a large internal combustion engine to the bicycle. And they saw that it was indeed better, except that it was bloody uncomfortable and it didn’t handle corners and bumps and things very well, and imagine how fast you could go and how much fun it would be if it did. And some of them set to work on designing some machinery to fix this.

The first type of motorcycle front suspension was the girder fork. It sported a pair of forks just like a bicycle, but hung them off the top tree on four links so they could have a spring (and later a damper) controlling the movement.

It was used for years. It was easy to manufacture, and could be engineered to provide reasonable performance. One of the last machines to use it was the 1950s Superbike, the Vincent Black Shadow. Black Shadows were good for about 200km/h. The final models sported what Vincent called Girdraulic suspension: a girder fork with a hydraulic damper. 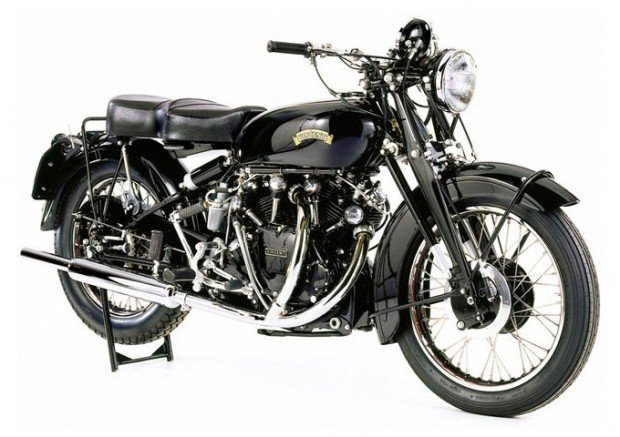 Earlier models had friction dampers — a series of disks which could be tightened by a screw to increase the damping. The problem with this setup was that they provided high initial friction which lessened as the wheel reached the end of its travel – the opposite to what is desirable. And the compression damping was pretty well equal to the rebound damping instead of being about 5% of it.

One particular advantage with Vincent’s linkage design was that it was adjustable. Decreasing the trail and rake for use with a sidecar meant simply raising the front wheel off the ground, backing off the lower rear spindle nut, twisting the eccentrics which held the pivot through 180 degrees, and re-tightening the nut. 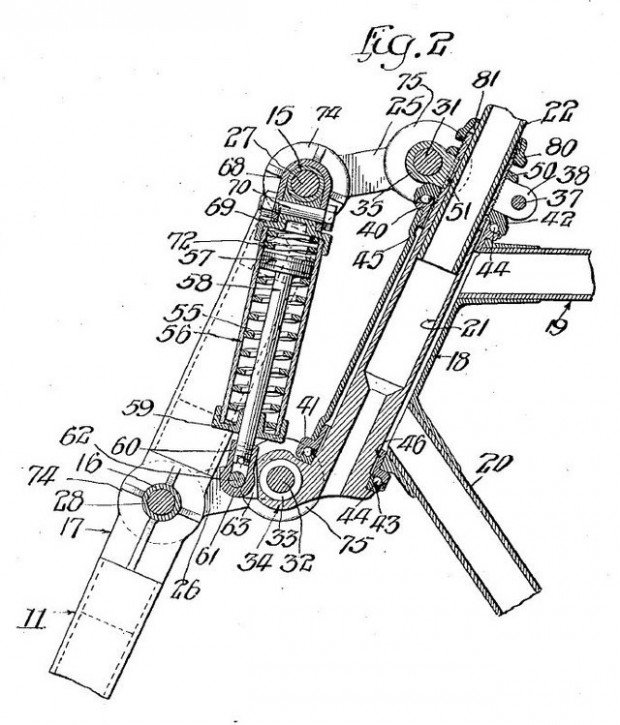 A drawing from a patent application for an early girder fork

The girder fork, however, suffers from several problems. First (and it’s a problem shared by many motorcycle front suspensions), the wheel is at the end of a metre long lever which is really good at twisting the steering head when you hit a bump while leaned over, and this isn’t good for stability.

You can engineer around this by bracing the steering head, but it adds weight, and adds it up high in the front of the motorcycle, raising the centre of gravity and making the motorcycle harder to turn.

The forks themselves bend, too, and in order to fix this they must be made larger, and thus heavier. This extra weight is the wrong sort: it’s unsprung, and it adds to the inertia of the wheel and fork, slowing their response when they hit a bump. And once it is moving, the extra weight is harder to stop, which puts more stress on the springs and dampers and makes the wheel harder to control.

Despite this, the girder fork is used in a current motorcycle: the Confederate Wraith.

J. T. Nesbitt, the director of Design at Confederate, thinks that the girder front end is worth having because it doesn’t have the stiction (static friction) issues that a telescopic fork has when under braking load. Confederate have engineered around many of the girder’s deficiencies. For a start, the fork is carbon fibre, and very light and strong. The suspension unit is a stressed member and locates inside the steering head. And the links are quite long, reducing wheelbase change during suspension movement.

A close relative of the girder fork is the springer fork. It’s often used in choppers, probably for the visual effect of having the suspension out in the open.

The Springer front end – a close relative of the girder

It differs from the girder in that the suspension links are at the bottom of the fork. Long arms transfer suspension movement to the spring/damper units, which are mounted up in the triple tree like those in the girder front end.

It suffers from the same engineering drawbacks as the girder front end. It has high unsprung weight, a long fork, short links and a variable wheelbase.

In 1918, when the motorcycle itself was only twenty or so years old, a gifted American designed and built an extraordinary motorcycle with a transmission, chassis and engine which were decades ahead of their time.

We’ll look at this amazing machine (among others) in part II. 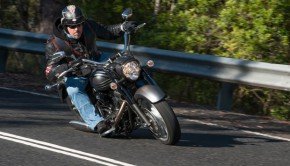