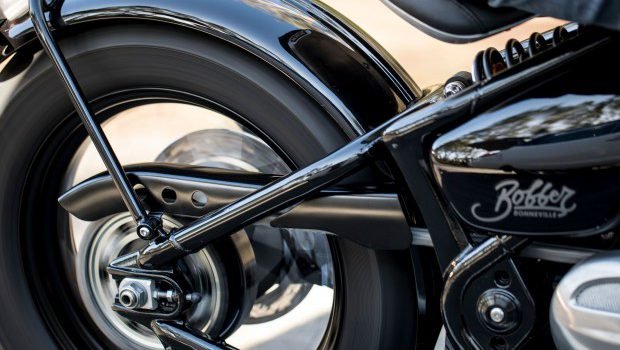 We were lunching at that Serbian restaurant he likes, and he had ordered hot rakija, because it was a cold day. I appreciated the warmth and anaesthetic effect. I had skinned my knee a few days before. It still stung. The wound, like the guitar of the Beatle Harrison, gently wept.

The Triumph Bonneville Bobber kept me busy on the way home. It has a tractor seat. The fender and tail light and turn signals and number plate go up and down with the rear wheel when you hit a bump. That bit offended my inner engineer.

It’s geared tall and very relaxed, and I never seemed to get past third gear in suburbia. Whoever had it before had mounted the mirrors upside down. They hung below the handlebar, and the chin piece of my helmet obstructed my view. I had to make wild head movements to see anything behind me, and I was descending into a crazed paranoia until I rode it into the car park underneath my apartment. Then I did the last slow turn before my garage, and the right mirror hit my wounded knee.

I rode it to work the next day. I felt I should be wearing one of those lumberjack shirts and skinny jeans but I owned neither. I also felt that I should grow an ironic moustache, so I skipped shaving. I stopped at the lights on Edinburgh Road and a guy on a ZZR1200 pulled up in the next lane. He stared at me for a long time. He had a full face helmet on and I couldn’t tell if it was with awe or pity.

I beat him away from the lights anyway. That Bonneville 1200 motor might be geared tall, but it pulls hard. I hit the bump on the left-hander before the office which makes the VFR and the V-Strom move a few inches to the right. The Bobber moved a few more inches to the right.

I rode it up to the Vietnamese bakery at lunch time. The chick behind the counter asked what I’d like, and I told her I really felt like some pulled pork on a roof tile.

“No!” she said. “No roof tile! You have chicken roll or pork roll. On prate!”

I had a pork roll.

It was much the same riding it in the next day, except the guy on the ZZR didn’t appear. “Geez,” said the boss, “I thought that thing was going to snap in half when you rode it over the gutter on the way out last night.”

“Yeah”, I said. “Everything at the back moves with the wheel when you hit a bump.”

I told him how it looked primitive and old-school, but it had computer stuff and ABS and traction control, and the motor was pretty well the same as the Thruxton R I was riding last year that stood up on its back wheel if you gave it some in first.

I rode it up to the pub on Friday night, and parked it on the footpath. A lot of people stared at it. I asked the barmaid if she had any craft beer and she recommended the Stone and Wood Jasper Ale. I ordered some in a screw top jar and she said she didn’t have screw top jars, just schooners or pints. I had a schooner.

I rode home with a nice beer buzz on, and the right hand mirror opened the wound on my knee again outside my garage.

I rode it up the motorway to meet Boris on the weekend. He asked how it was. “That is some relaxed motorcycling right there”, I told him. “I only realised a kilometre before the off-ramp that I was in fifth and there was another gear.”

“Tell me”, he said. “Would you like a skinny soy mocha latte?”

“That sounds nice” I said.

“I feared as much”, he said kindly. “This is what happens if you don’t lift and you ride bikes like that. You will not be taking your VFR back. You will be taking the 2017 Honda Fireblade. It has a hundred and eighty nine horsepower. It will soon set you right.”

He dropped the key in my hand.

I rode it home. It was very fast, and made a nasty raspy noise from its exhaust when approaching mid revs.

My phone buzzed as I was locking the garage behind it. It was an SMS message from Boris. “How Firebladey is that Fireblade?” it said.

I didn’t reply, of course. I recognize a rhetorical device when I see it. I went upstairs and made myself a cup of coffee. Black and strong, no sugar.

A man would want to stay alert if he was going to be getting around on one of those things for the next week or two.