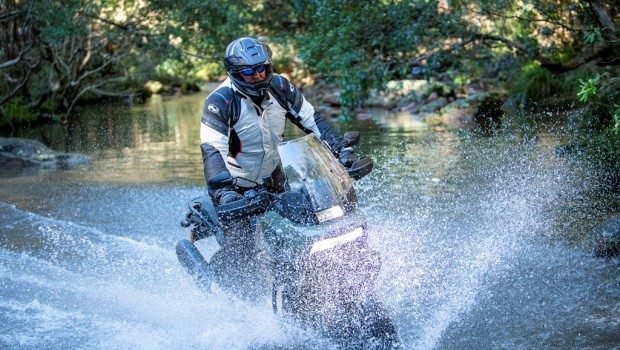 HELD ADVENTURE TOURING GEAR REVIEW – “COME AT ME, EVERYTHING!”

Once, we were all just motorcyclists.

Scorned by society, tormented by cops, and at one with the universe. Our souls were pure and our hearts beat in time with the pulse of the cosmos. 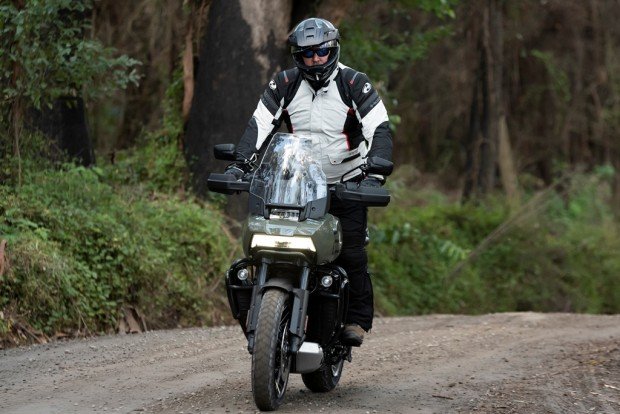 All the Adventure all the time, ladies.

Anyway, one such type of motorcyclist is the Adventure Tourer – and even he is divided into two sub-sets.

The first is the bold, heroic, curious, and intrepid type. There is dust in every crevice of his body and bike. He’s done big, dirty miles, climbed mountains, forded rivers, and seen eagles soar upon high.

The second imagines himself to be the first type, and has the motorcycle and gear to prove it…um, except his bike has not seen more than a few kays of graded fire-trail (if that), and he has the dirt-riding skills of a washing machine.

And that’s fine. More power to him. Maybe one day he will take the road less travelled, and when he does, he’d best be wearing Adventure Touring gear. 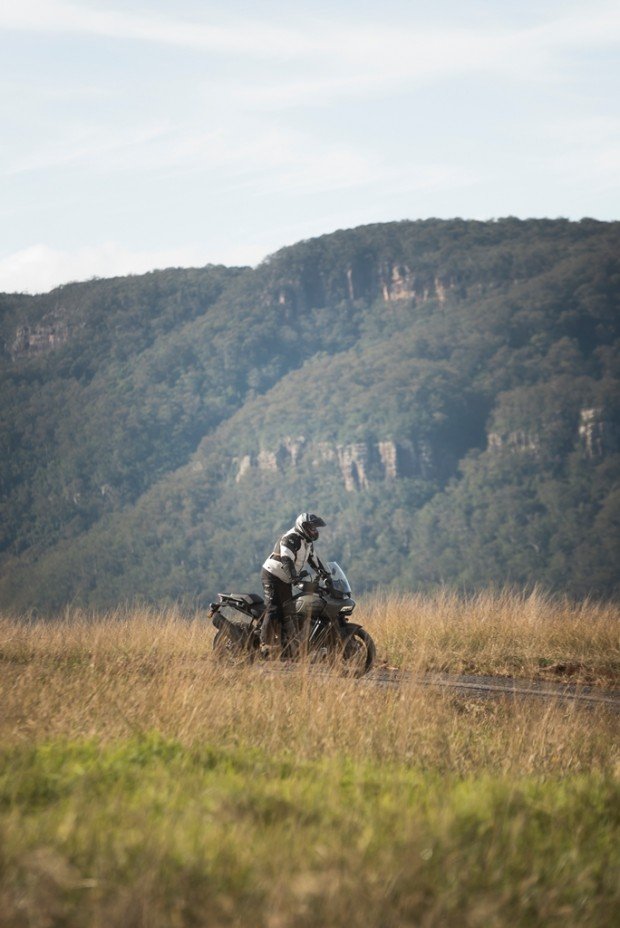 There are lions here.

Now let me just say a few words in general about Adventure Touring gear, because you will notice it’s not quite like normal motorcycle gear – and there are good reasons why it’s not.

Firstly, like all bike gear, it comes in three tiers – Superb, It’ll Do, and I’m An Idiot So Just Let Me Die. It is entirely up to you which tier you wish to rock. Just remember, Adventure Tourers are very judgemental, and being a povo-minded scrooge can come back to bite you when you’re tumbling down a mountain with your cheap rags flapping like a busted mop as your skin is peeled off your bones.

Secondly, most Adventure Touring gear is not a dark colour. This is so it’s easier for the rescue choppers to find you when you’ve fallen into a deep ravine. And, when you’re crossing the Sahara, light-coloured gear reflects the heat far better than dark gear. This is good, because when you crash, it’s better to be eaten by nocturnal jackals than high-noon vultures. Ask anyone.

Thirdly, you’ll notice that Adventure Touring jackets are longer than normal bike jackets. The main reason for this is that when your friends need to make a stretcher for you, your longer jacket gives them more material to work with. The second reason is that a longer jacket tends to be more slimming, and everyone knows that proper Adventure Touring riders need to store as much fat as they can so they can survive for longer when they ride off a cliff.

It was with this knowledge I presented myself at Made In Germany HQ.

“I am going Adventure Touring on the new Harley-Davidson Pan America,” I said. “And I need to be caparisoned appropriately.”

In very short order, I was laden with a jacket and pants the like of which I had never imagined I would wear, since I had no intention of ever riding to dusty Nogoonnuur on the shores of the wondrous Lake Achit in Western Bastard Mongolia.

But now I could, and that is all that matters. It was certainly gear more than adequate for a sedate little jaunt around Kangaroo Valley in NSW.

Please note that both these Held items are full of GORE-TEX, and this is why they have a five-year guarantee. 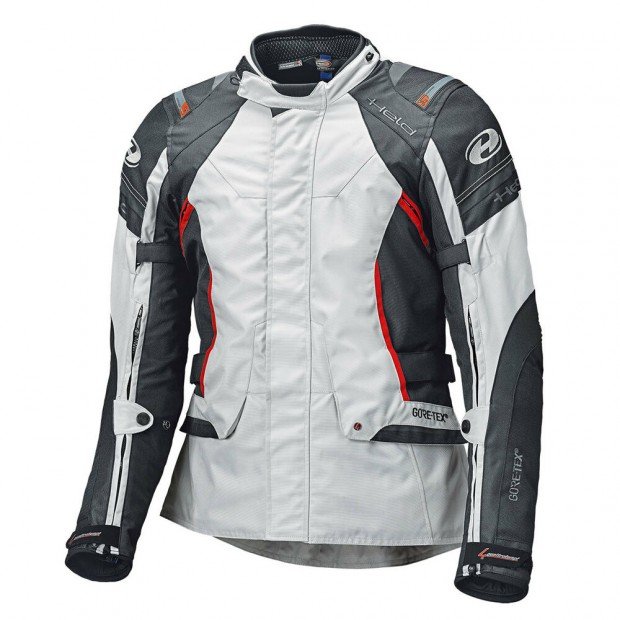 Never be ashamed of yourself again…

I found the jacket to be light and comfortable. It did not ride up, and it did not chew on my soft inner elbow-meat, or tear at my unshaven neck. The collar is soft, and it has to be soft. If you have a jacket where the collar is not soft, then the idiots who made that jacket either do not grow hair on their necks, or do not understand that men do grow hair there – and when men have been Adventure Touring for a few days, they have not shaved. So when the jacket collar starts to rub on that unshaved bit, it makes you crazy, and when you are crazy you will take your hunting knife and cut that collar off and throw it into the fire, and nod in satisfaction. 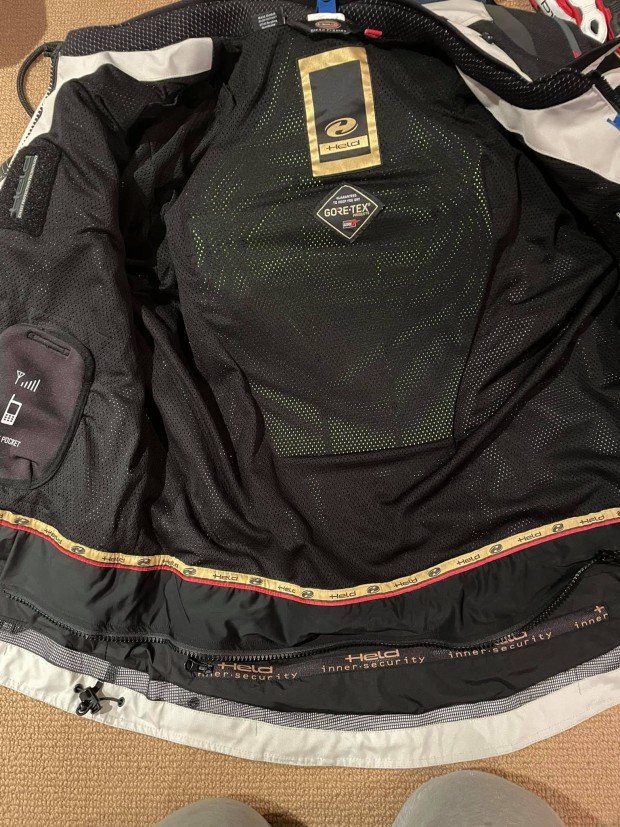 How lovely is it inside? Very lovely.

It is one jacket. Which I like. It’s not one jacket zipped inside another jacket. Those types of jackets have their place, but we all know that once you remove that inner jacket, it is unlikely you will ever put it back inside the outer jacket without some deal of suffering. 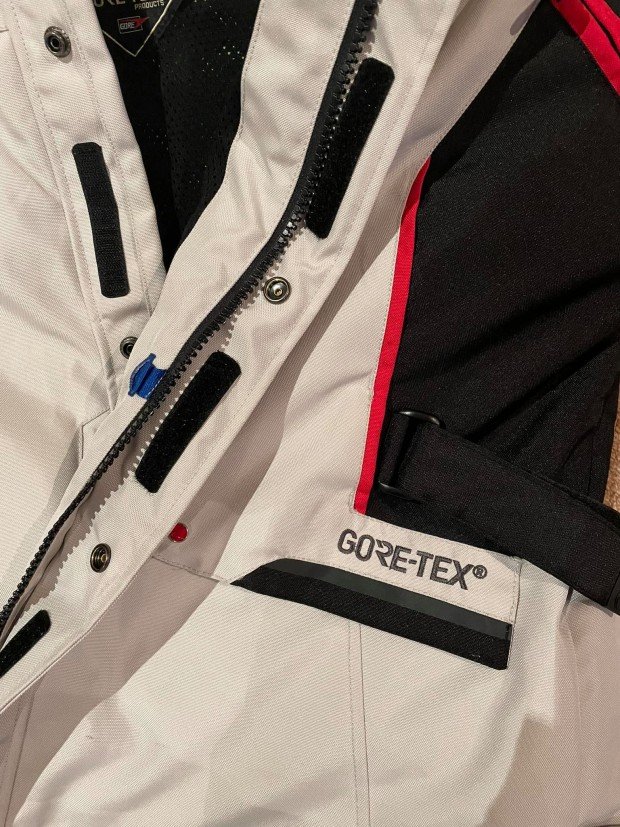 So zipper and Velcro.

Do I have to tell you about GORE-TEX? No? Good. Just know the Molto’s internal membrane is made entirely from it. It also has that brilliant Held SAS-TEC soft armour at the shoulders and elbows, and you can add back and chest protectors if you’ve a mind too. The bits that will hit the ground in case of an oopsie, are all reinforced Ripstop material. 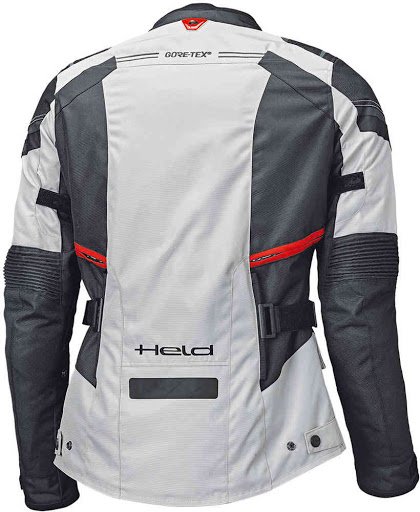 This is what your pillion will see, and it will make her hot.

It comes with two waterproof external pockets, one inner pocket, a map pocket, and a neoprene mobile phone pocket. That pocket should be bigger. I can fit an iPhone 12 into it, but I cannot Velcro it shut.

The waist adjustment can be done at various heights (depending on where your belly lives, I guess), the arms have dual adjustments (in case you’re rocking biceps), and the whole thing is very well vented – but it was cold, so they all stayed closed. 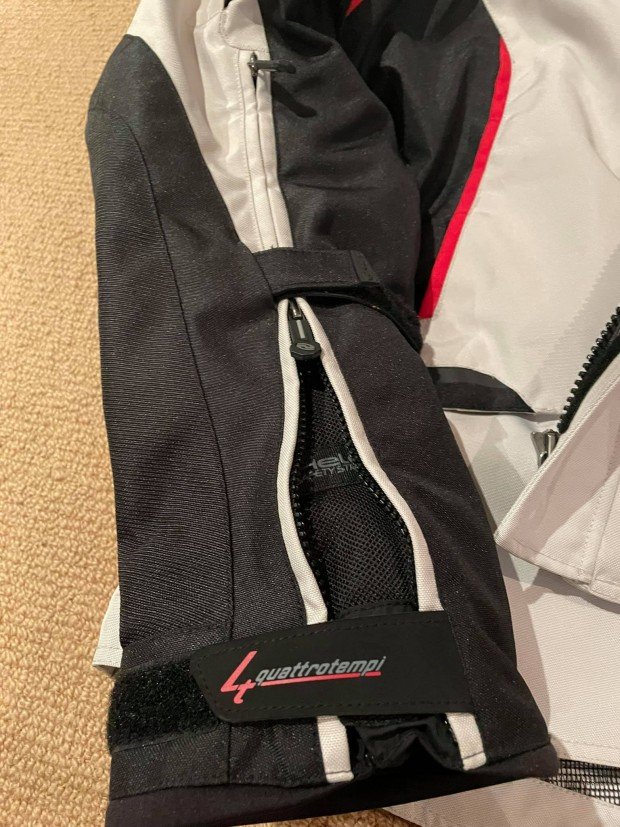 Makes it easy to get long gauntlet gloves under the sleeves.

It does up with a meaty zipper and Velcro tabs down the front, you can get gauntlet gloves inside the sleeves thanks to the long zippers, and it looks and feels like a very high-end, high-price jacket.

Except it’s not all that highly priced. It’s very reasonably priced, and comes in three colour variants and sizes from S to 5XL. 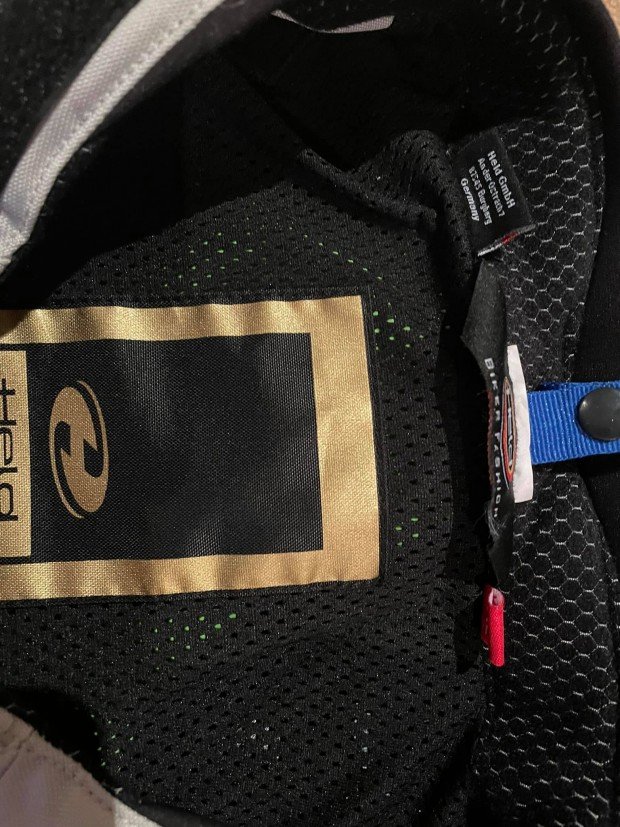 I liked that it didn’t feel like you were wearing a canvas tent – which is how so many Adventure Touring jackets feel like when you put them on. And comfort is crucial in this space. You cannot focus on not riding off a cliff if you’re jacket feels like you’ve donned a boat-sail.

Then there’s the whole hostage aspect. You want the cannibals who have kidnapped you to know you’re a person of quality and style, who will fetch a handsome ransom. If you look like a crumpled, ill-fitted wretch in your Adventure Touring gear, then you’re in the cook-pot without a second thought, and your crap gear will be turned into a weather-flap on the chief’s wife’s yurt.

Do not be that guy.

WHERE CAN I GET IT FROM? 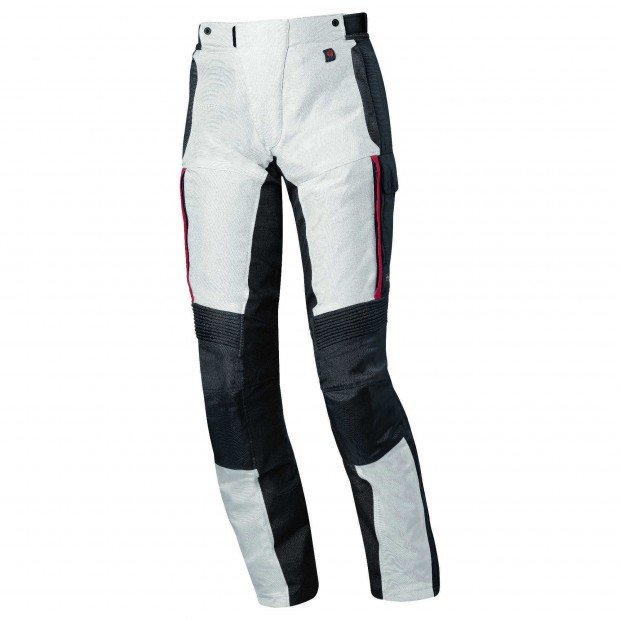 Mine were not this colour option – but yours can be.

These may well be the greatest riding pants I have ever owned. They are certainly the most valuable, which is fine, because I expect my son will inherit them when I pass from this life.

I put them on and I feel the full Adventure Touring business. I want it to storm, and I want the wind to howl, and I want to plough through every imaginable horror with my legs and man-vegetables encased in lovely GORE-TEX and DuPont Cordura. 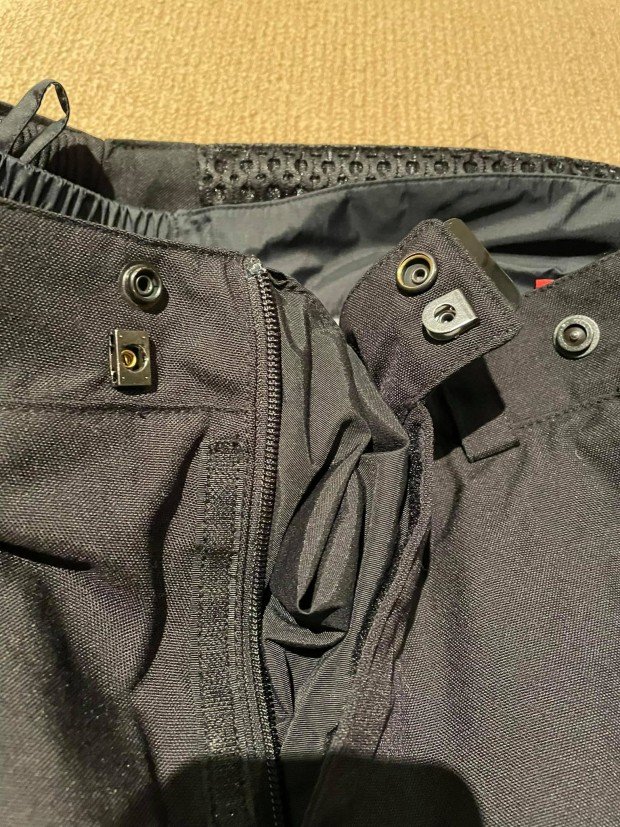 Eat them dumplings. All of them.

The Torno IIs are seriously feature-packed. But my favourite bit – and if you like pies and dumplings like me, you’ll understand why I love this feature so much – is the way they do up.

All Held pants do up like this, and it’s very clever, and so efficiently German. The waist does up with both a press-stud and a hook. One sits above the other. And while the press-stud may let go after a big lunch, the hook won’t. That said, Held does not use cheap-arse press-studs. They’re solid. But…well, you know how yummy dumplings are, right?

So these are two high-waisted pants in one. The GORE-TEX pants sit inside the Cordura pants – and yes, they do up the same way – press stud and hook.

You can remove the GORE-TEX inner pants and wear them as rain-proof over-pants, Or you can leave them inside. Which is the smart call in winter. Not so smart in summer, maybe. They are very warm.

Generally, inner-pants are easier to replace inside the outer-pants than inner-jackets. Look, there will always be swearing during the process, but the advantage of having two pairs of pants during an adventurous tour is vast. You can trade one pair for food. Or petrol. Or a woman. Needs must, people. needs must. 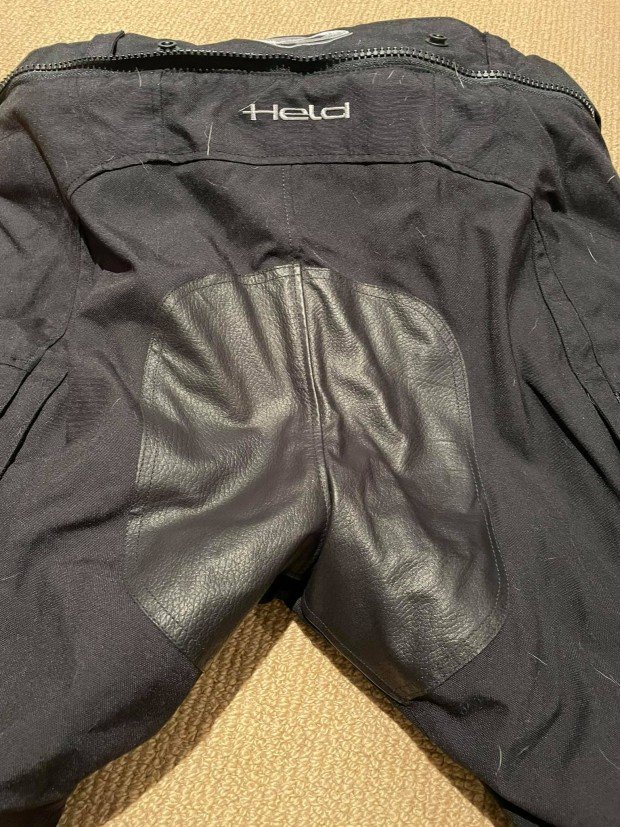 Fine leather for your bottom.

The bum section of the Torno IIs is that wonderful PITTARDS anti-slip leather, the four external pockets zip up as well as close magnetically, and can double as air-vents. There are buttons on the waist, so you can add braces for the full farmer effect, and its easy getting them over long boots. The ankles do up with both zipper and Velcro.

Held’s SAS-TEC armour lives here as well, and can be adjusted to make it sit properly where your knees are. It’s kind of pointless having armour that sits above or below your knees, right? Optional coccyx and hip armour can also be added. 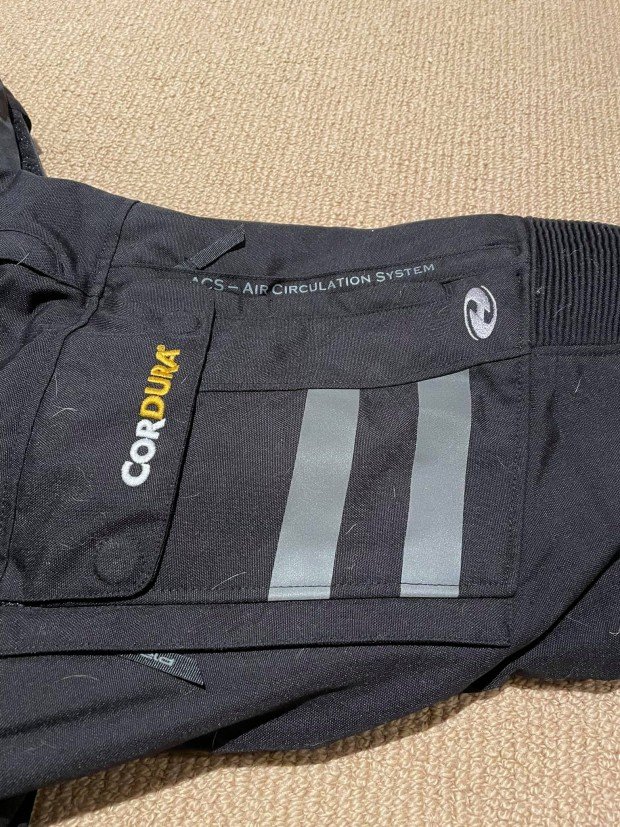 It’s just made so well and so German.

I like how they do not bunch behind your knees – and no good riding pants ever should. It also has a connecting zip, so you can attach it to a jacket. I have never done this. But I have zipped enough bastards together to know some people do. Yes, it’s a two-man gig that. This may be some aspect of Adventure Touring I am unfamiliar with. Perhaps to keep all the meat in one container rather than two. I do not know.

These are meaningful, top-shelf motorcycle strides, which you don’t have to go Adventure Touring in. But if you do, natives everywhere will look upon you and understand immediately who the double-panted effendi is, and what honour and respect is due to him.

WHERE CAN I GET THEM?