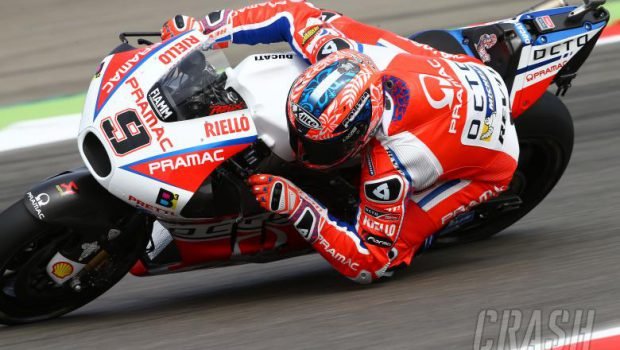 Before you start screaming and breaking things, just hear me out.

We’re going to give you a new fairing for the Brno round. We’ve been working on it while you were off trying on sunglasses over the summer break, and we got Danilo to test it at Misano.

Danilo will ride anything we give him, just as long as it’s painted red. Just for a laugh one day during the test, we dyed a mule red and sent him out for a few laps.

Bastard rode that poor animal like a heathen. He had the screaming beast cranked so far over in the turns its hooves were kicking up sparks as it scrabbled for traction. He didn’t even know it was a mule for like maybe five laps. He said later he thought its braying and screeching was coming from your motorhome.

But he was still about half-a-second a lap faster than you. Now don’t go crazy. It was a pretty fit mule, and Danilo was whipping it like a disobedient slave.

I know you wanted winglets. But winglets are banned this year, remember? Especially since you also wanted them installed on your helmet, boots, gloves and back.

And we also know that no matter how many Japanese sex-octopuses we force into your rear cowling, how much telemetry we install in the engine, or how wonderful you think your new Mambodromic valves are, at the end of the day, we need to make the bike more stable.

That way, on those now rare occasions when you twist the throttle, you won’t squirt yellow fright-pee from your bottom, and all things being equal, you won’t qualify in last place again.

And Danilo liked the new fairing. “The Misano test was good,” he said. “I was surprised by how many things Ducati built during the first part of the season.” I think he was looking at your bike when he said that.

Because we’re not surprised.  We’re up to George Seat Number 97. There is no more super-grip MotoGP-seat material left on this earth and we’re now having to recycle the stuff you rejected after Qatar.

So this is all about “downforce”, George. Without getting too technical, downforce is a combination of air resistance and gravity and has the effect of pushing the bike down towards the ground while giving it increased stability.

Don’t overthink it. You don’t need to know how sausages are made.

I know you wanted me to create “butterforce” to help you go faster, but we’re running out of places to put your special-needs technology.

Mario did suggest we fit your bike with a 44-litre topbox, which would hold several more octopi and a heap more telemetry, and we could have even incorporated a back-rest onto it, so you could rest on the straights.

But Carmelo told me to fuck off when I ran the idea past him. He then threatened to drug-test me and beat me with wet ropes, and we can’t have that.

And speaking of being beaten with wet ropes, Matthias told me he bought some really fine lengths of thick sisal and some buckets he plans to fill with seawater. He wants to show them to you at some stage.

So there you have it. You don’t have to use the new fairing. But it’s there if you do.

Don’t be late for practice. They’re not going to wait for you.