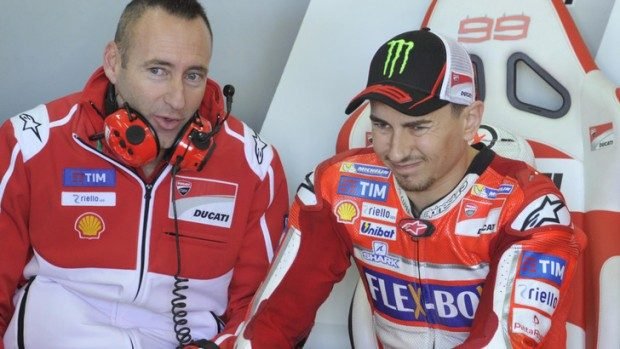 “He said you should ‘not show so much the terror in Turn 3 at Qatar because the foul Arabs beat their camels with joy when they see fear in the infidel’.”

I’m not convinced we can execute Alex Debón with a firing squad as a going-away present. I know you’ve ordered the guns and the uniforms and even had one of the mechanics knock up a brick wall in the Ducati staff carpark, but I’m pretty sure Claudio is not going to let you shoot “that bald, flea-bitten old fracaso traicionero who smells like an orphan-bed full of tears and piss”.

I’m convinced he is not passing any confidential information to Rossi. What can Debón tell him? You’re slow and you fell off at Qatar? I think Rossi knows that.

But thank you for sending me the photo which shows you making fresh defecación in your leathers every time Debón speaks to you, but I must remind you it’s entirely your fault he’s even here, wandering around the pits praying to the Santa Maria Madre de Dios to give him strength and drinking vino barato like a homeless and soon-to-be unemployed derelict.

Yes, I know people will think he might be Redding or Smith if the light is bad, and that is a little bit funny, but it’s still your fault, George.

You’ll remember we initially hired Michele Pirro to coach you in how to rub yourself against the sex-octopus, and where it’s best to feel the telemetry with your thighs, yes? Unfortunately, Michele rode his test Ducati, an old Pantah from last century we put sexy new fairings on, faster than you rode every MotoGP Ducati we’ve ever made. Or ever will make.

So Claudio sent him away because someone has to develop the damn bikes for Dovizioso, and he heard you’d bought mamba death-venom to rub onto the inside of Michele’s leathers in the hope he’d “die screaming with diseased yellow water running down his skinny puta legs”.

So then we hired Alex because he was so shit at racing he couldn’t possibly upset you by riding faster than you. We wouldn’t even let him sit on your MotoGP bike. He was only allowed to look at pictures of it, just like you insisted.

We then made him learn the tracks on Playstation so you would believe he actually knew what he was talking about when he said you should “not show so much the terror in Turn 3 at Qatar because the foul Arabs beat their camels with joy when they see fear in the infidel”.

We thought you liked him because you didn’t spit into his coffee like you do into Andrea’s every morning.

And then he showed you his 250cc lap-times from 2007, all of which were faster than your lap times from 2017. And everything pretty much went to hell after that, didn’t it?

You were never going to be able to skin him well enough to wear his “stinking bitch-hide like a Spartan war-cape”, but it was the threat that you’d try that got everyone upset.

And you’re still not allowed to shoot him in the face, OK? It’s not at all a “better trade-off than skinning the hopeless bald fuck”.

Besides, Dorna will not sanction it. I think Rossi made the same request about Marquez two years ago and while Carmelo did think about it, he did decide not to proceed.

Try and focus on Argentina. I know you like to call yourself El Conquistador el grande y terrible there, but just like last year, it’s going to be hard to get the local people to line the streets and throw flowers at you during the parade you’re not allowed to have.

Still, I know you like Argentina better than the USA where they all think you’re Mexican.

In the meantime, there’s to be no firing squad for Debón, OK? Promise?