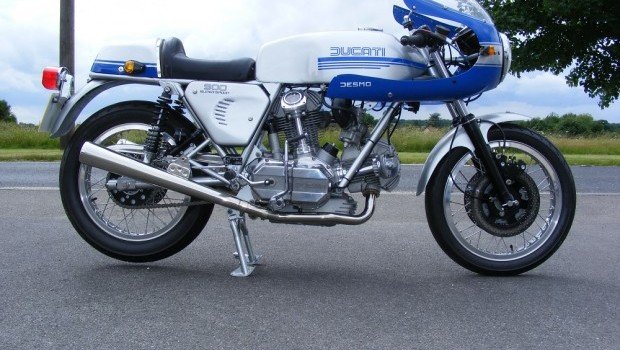 I was over at my mate Ian Buckley’s place the other night when I was suddenly gripped by a cruel cramp of dumb nostalgia.

It all began as a rather beaut and typical Bloke Night. It was Friday, a case of good beer was produced, a barbecue was in the offing and some blokes who don’t gather together all that often had gathered to do man-things with bastard motorcycles.

Whale was there to collect his (and formerly Ian’s) Harris-framed Suzuki Manbike. The same bike I had expertly crashed at the Creek’s Turn 10 during my brilliant, but shamefully brief, racing career. It had been repaired and was going to a new home on the north coast of NSW where it would be made roadworthy and registered and become Whale’s special love interest.

He, in turn, had delivered a ridiculous wooden sidecar to another mutual mate, Sonny. Sonny had just sat out a year for being nabbed doing 873km/h in a 20 zone, or some such shit, and was toying with the idea of further unmanning himself by attaching a wheeled timber crate to his bike, thereby making it not-a-bike (yeah, and you sidecar-driving boombahs can now start writing your stupid complaint letters about how Borrie said your three-wheeled bog-heaps aren’t motorcycles, OK?) and thus excluding himself forever from the company of proper motorcyclists.

I was there hoping to get Ian to fit the replacement tail-tidy Powerbronze had sent me after the first unit went to Jesus in a selfish display of materials failure. And Ian was hoping the drunks now swaying and laughing in his garage could somehow be talked into helping him drop a BMW boxer donk out of its frame so he could take it to bed with him or something. Another mate, Al, was on hand to assist with the drinking of beer and the burying of bodies (should that become necessary) and we were waiting for Snowy, whose bike had ceased to proceed somewhere on the Doom Highway and, according to the garbled, curse-filled phone call he made, was even then being stabbed repeatedly in the hoses and float bowls with a knife.

At about 7pm, Ian decided it was safer leaving the problematical BMW engine in the frame. The beer had centred my concentration wonderfully and I was sledgehammer keen to have at the problem. I even knew where his sledgehammer was, and was being encouraged in this by Whale, who reasoned it was more important that Ian make his Harris roadworthy “now”, or at the very least allow us to tape a torch to the top triple clamp so that we could take turns riding it up and down the street at speed.

But alas, it was not to be. If we were a few years younger…well, who knows? But Ian fired up the barby, deposited chunks of some dead beastosaurus on the grill, and all attention was suddenly on his Indoor Ducati.

Ian has a 1976 Ducati 750SS sitting next to his kitchen bench. It is unrestored, still sports Pirelli Phantoms, Contis, and Aprilia switchblocks, and was rebuilt by Gowanloch after it detonated beneath the original owner like a keg full of Italian hate.

Each time I see this bike I am seized by waves of insane nostalgic thoughts about the fabled “Good Old Days” – when men rode these iconic thundering monsters along endlessly twisting stretches of pristine bitumen, achieving lean angles and speeds that would be honoured at fireside brag-fests until the end of time.

The reality, of course, is much different. Australia’s roads in 1976 were places goats broke legs and the only bastards who rode Ducatis were iron-spined psychopaths. I’ve stood around those campfires and the poor Ducati riders (if they even made it to the campsites) would promptly drink themselves into oblivion to dull their ever-present pain. On the rare occasion they got their SS to work properly, it would certainly see off any Jap bike through the bends, but then it would just as certainly spoof its guts all over the road, or simply refuse to start for a month.

Ride one of those old SSs today and it would be like sitting in a shopping trolley and being pushed off your roof. Your spine would be fused, and your teeth would be pain-flavoured bone-powder. Truth be told, those remote-reservoir Marzocchis were crap. I know. I had some. I even tried mounting them upside down. It didn’t matter. They were just shit. But they were painted orange and were the must-have accessory of the time.

And if more truth were to be told, all those bikes from that era were crap compared to the glorious stuff we’re riding now.

No-one builds bad bikes anymore. Some bikes are greater than others, but none are bad.

The Good Old Days? Crap. There’s no such thing.