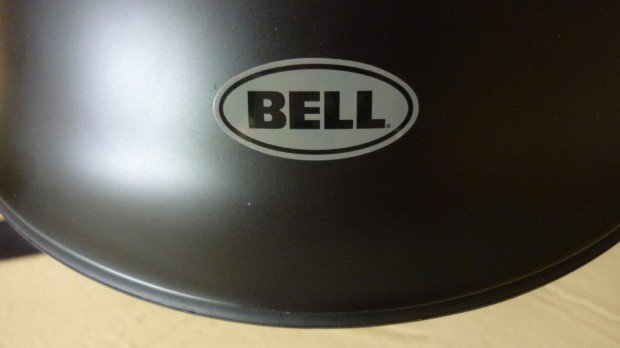 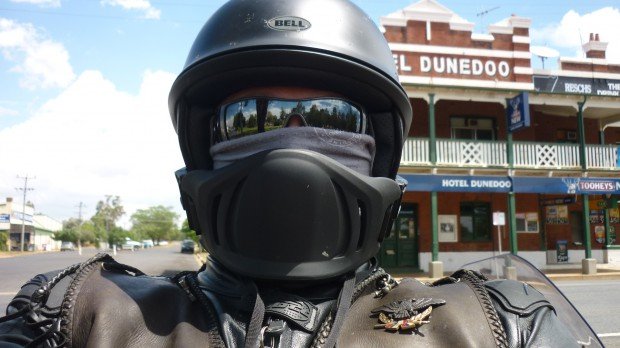 The moment I laid eyes on this helmet I knew it had to be mine.

It simply radiated bad-arsery – and quite frankly, when it comes to staying alive on the roads (and pulling hot chicks), a man just cannot radiate enough bad-arsery.

But the Bell Rogue was not available in Australia when I first began to covet it around May this year.

I rang Monza, the importer, and begged to know when it would become available.

“November”, I was told. True enough, November arrived and so did a box containing my new helmet. 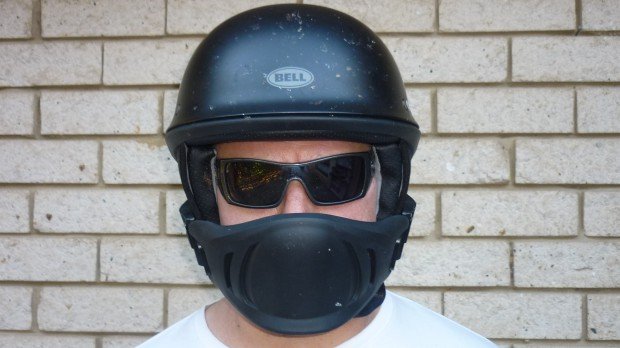 “Do not be alarmed, citizens. If you have done nothing wrong, you have nothing to worry about. Unless you’re a bug. In which case you will be smeared all over the front of this thing.” 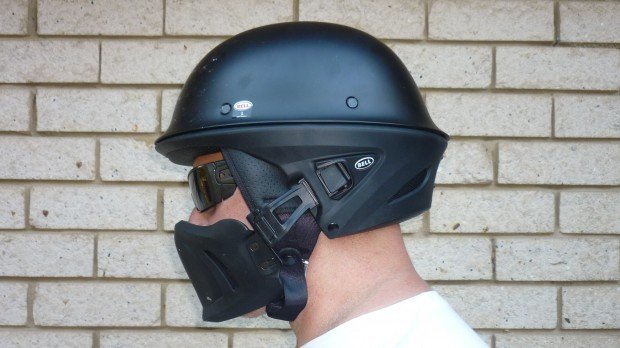 Probably its best angle. Mine too. 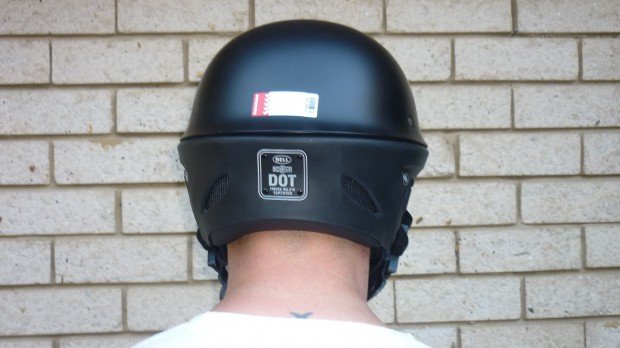 It has all the necessary labels. And please don’t call me Dot. That bottom section is quite pliable, unlike the helmet shell.

Now, as you can imagine, not all the bad-arsery in the world is going to matter a jot if the lid is crap. One cannot appear to be an eater of children and a slayer of dragons if one’s helmet is strangling one at speed, or providing one with an earache due to being aerodynamically insane.

I assembled it – yes, you actually have to assemble it, and there are three bits to it. There is the helmet proper, the muzzle and a muzzle-liner. 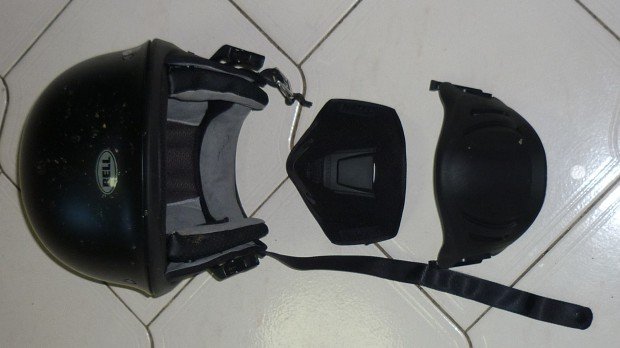 From left to right: Lid, muzzle-liner, muzzle. Note the length of the strap. Does it have to be this long? Yes, basically. It helps when you’re trying to fasten it when the muzzle is on. The excess does clip neatly away, though.

It works like this: The muzzle adjusts outward and inward via tabs on the plastic arms either side of the lid. There are really only three positions, right in towards your face, out a bit and out a lot. I decide out a bit was for me. You can then also use a little screwdriver and adjust the muzzle’s tilt, but only a little. I figured its tilt was fine for me and also found that I could now slip the lid on and off my head with the muzzle on. 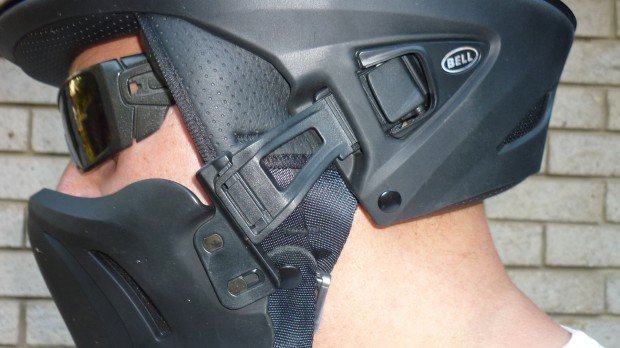 The plastic arm slides in and out when you depress the tab to the left of the Bell sticker. The muzzle slides down into the magnetic bracket which is at the end of the arm. That bottom screw can be loosened so that the muzzle’s tilt angle can be adjusted.

I would not be relying on the muzzle to protect my face from anything but rain, bugs and rocks, but. Then again, it’s not all that different to the chin-piece of a full-face in terms of safety. It did work well in the rain, and for that I was grateful. Just be aware that in the rain, your sunnies will fog up at lights. The muzzle traps your rancid breath quite well at standstill. But the fog is gone before you’re across the intersection after the green.

The next hurdle was the unfeasibly long strap. And just how fiddly it can be to get it into the double-D rings, which are quite close to the left-hand arm that anchors the muzzle.

But, like any new thing, once you get the hang of it and your synapses are programmed, it becomes automatic. After two days and many swear words, I had it down pat. After four days, I was able to slip the muzzle on and off just by feel, rather than staring into the bike’s mirror like a chick doing her make-up.

So, it’s a bit fiddly at first. Then it’s not. Like a new girlfriend, I suppose.

How does it work once it’s on? 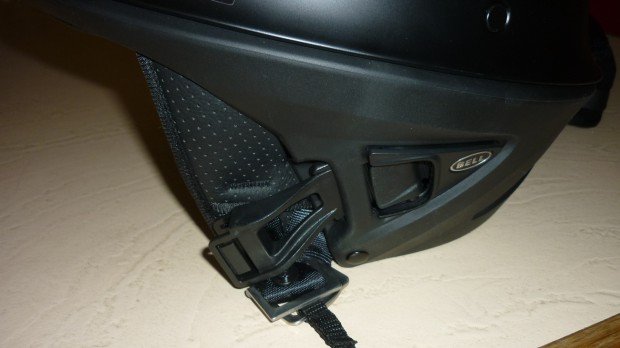 This is the arm without the muzzle attached.

Just great. It is comfortable, it does not lift, even at the stupid speeds I explored a little on a recent run out to Warren, and it’s wonderful for summer, allowing lots of air to circulate around your neck and the lower part of your head – a place normally buried in the bottom of a normal lid.

It’s very light, which adds to its comfort and sunnies slip in and out with ease. I understand you can also wear goggles with it, but they will need to be smaller than the traditional MX-style I normally rock, and I didn’t have any like that to try out. 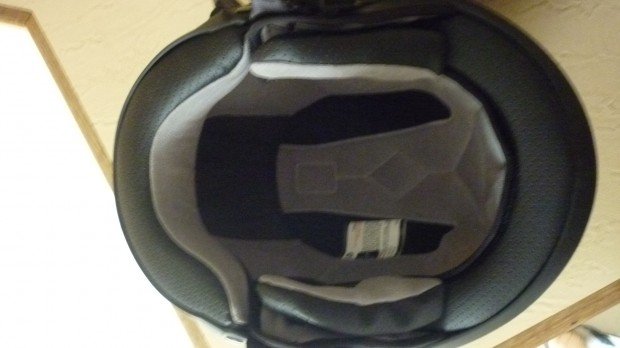 The lining is soft, removable, washable and still smelt pretty alright after I had sweated some into it.

It’s noisy, but if you’re gonna whinge about wind-noise after buying a half-face lid, you need to have a look at yourself. Wear earplugs. All the cool kids do that.

And ultimately, it really does look the business in terms of meanness and menace. You might even consider a few neck tatts to help it along if you’re not really the intimidating type.

It’s a great product, unique, kinda clever and I have no hesitation in recommending it to you.