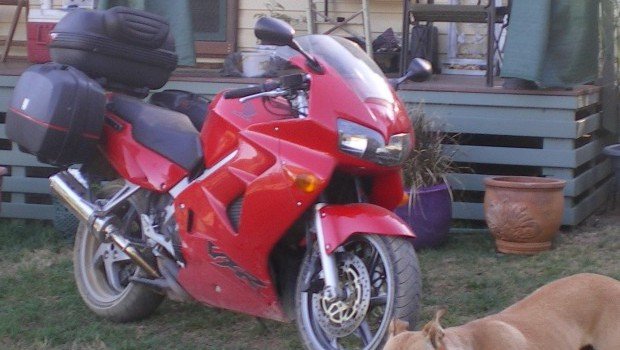 I bought my Honda VFR800 second hand, and it came with a top box, and a Givi Wingrack.

Hard luggage rocks. You can lock it, and it keeps your stuff dry.

I bought some side bags to go with the top box, and a lock and key kit so I could open my side bags and my top box with the same key. It was expensive, but very convenient.

One day I went for a ride with some guys, and I was out near Bathurst somewhere when I saw my top box moving around in my mirror. I stopped, and found that my Givi Wingrack had snapped.

I strapped the top box on to the pillion seat with a cargo net, and got home. I knew that Givi no longer sold the Wingrack for the Honda VFR800, so I went on line and bought their replacements: a Givi 257FZ top case rack, and a Givi PL257 side case rack. They were expensive, but hard luggage rocks.

I had a great time with these, because hard luggage rocks. On one run along the Oxley Highway I made Mick R laugh, because he thought I was going to scrape my side bags on the road in turns, and that night I partied hard and drank the true, the blushful Hippocrene; and a bit of Jamesons as well, knowing that my stuff was dry and secure.

Then the Givi rack snapped the subframe of the VFR at the front mounting points, and some bits fell off. I bought another subframe on eBay, and when I checked out the Givi site to replace the bits that fell off, I found that the Givi 257FZ top case rack was different now, and had extra reinforcing bits added.

Hard luggage rocks. I took my daughter to my brother’s place in the country and camped, and went to a BIKE ME! charity poker run in Victoria, and went to Daz’s country estate and camped, and I partied hard and drank more of the true, the blushful Hippocrene and more Jamesons, and my stuff was dry and secure, and the weight was down low and the motorcycle handled well.

Then I noticed my top box moving around and found that the Givi 257FZ had snapped.

Bloody Italians. Are they good at anything? Apart from doing unspeakable things to Ethiopians, surrendering in division strength in wars, and electing coglioni to govern them, I mean. Cazzo! How hard is it to make a piece of steel to hold a bag on a motorcycle?

Too hard, apparently, for those puttani at Givi. Imagine their HR people writing ads for their rack designers. “Must be a communist, a syndicator, a lunch photographer and a finocchio. Experience at pissing off Australians will be favourably regarded.”

I had a Ventura pack rack on my last VFR. The bag was easy to steal, and not waterproof. I rode many thousands of miles with it, and the rack DIDN’T BREAK!

I bought another one, and put all my Givi stuff on eBay.

I told Bly all about it. He didn’t seem interested. He has two Ducatis, you know. Sometimes I think the only reason he rides with me is so he can get a lift back when the inevitable happens.

I asked him what he used to carry his luggage. He said he had a Ventura pack rack.

I asked him if he ever tried hard luggage. He said he had some setup with Pelican bags a while back, but he sold them on eBay.

I asked him why.

He said hard luggage was for homos.

“That’s ridiculous”, I retorted. “I’ve had hard luggage on the Viffer for two years, and on the KLR for a year and a half, and I had it on my last bike for years. Are you saying I’m a homo?”