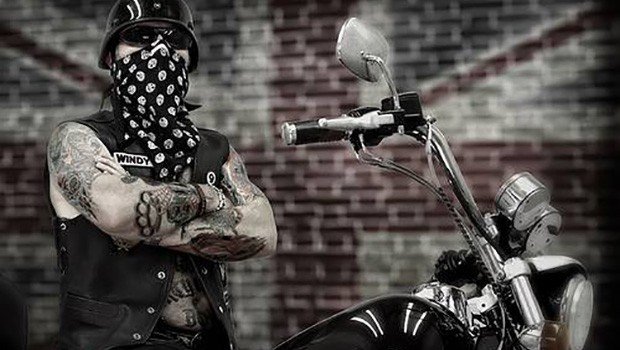 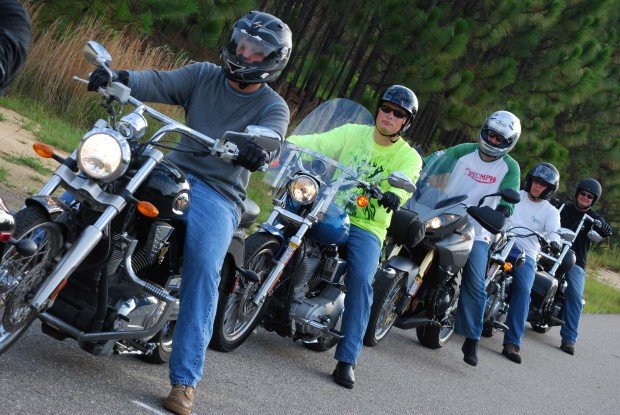 For reasons that cannot be comprehended, the Queensland police are unable to differentiate between outlaw motorcycle clubs and groups of riders who look like this.

It seems like a type of paranoid dumbness has gripped our masters of late. I am concerned that the amount of tongue-drool left upon the windows of the Queensland parliament will never wash off. I know it’s dumb of me to expect intelligence from people who have been elected to lead us, but that is the cross I bear.

The issue? Well, according to the government gibbons and their lackey media north of the Tweed River, outlaw bikie apocalypse has descended upon Queensland. And therefore, Queensland must adopt the policies of Germany circa 1936.

Reichsführer Campbell Newman promptly lost his man-titties following a relatively benign disagreement over a girlfriend between two outlaw motorcycle club members that recently took place in Surfers Paradise – a place renowned for its churches, prayer groups, nunneries, children’s petting zoos and orphanages. In the wake of this non-event – and it was a non-event because the clubs were not in dispute over orphanage-burning rights or the violation of nuns – Reichsführer Newman declared he will ram through parliament the “toughest laws Australia has ever seen”.

And none of these laws will be subject to any public consultation or the normal parliamentary committee processes. “We make no apologies for that!” the Reichsführer trumpeted, which is Reichsführer-speak for “I don’t give a shit what anyone thinks.” Immediately following this declaration, his storm-troopers were injected with millions of dollars of tax-payers’ money and directed to stop any group of three or more motorcyclists…and, um, look at them closely.

And maybe photograph them some. And ask them questions. And put them on a list.

The Reichsführer’s pet lawyer, Reichsadvokat Jarrod Bliejie, appealed for understanding, and admitted that while these new laws are allegedly only targeted at outlaw motorcycle clubs, “There will be some disruption to law abiding motorbike riders”. The police apparently have difficulty in telling non-outlaw motorcyclists from outlaw motorcyclists, so I would assist them in that regard.

If you behold a group of riders astride high-powered Japanese motorcycles wearing garish full-face helmets, they are not the driods you’re looking for.

If you encounter a group of Harleys travelling below the speed limit, carrying tubby middle-aged women on the back, fluttering pennons from the flag poles mounted astern of the luggage, with the lead rider waving his arm in the air like a drowning man, these are also not the droids you’re looking for.

If you bump into a pack of blokes wearing backpacks, riding noisy, gangly motorcycles with lumpy-looking tyres, some of which might be emitting the life-giving odour of two-stroke, your droid search is still on-going. What you need to be looking for are men astride noisy Harleys, wearing small black helmets, dark bandannas, wrap-around shades and many intimidating tattoos. The clincher, in case, you’re still confused, will be the name of their club blazoned across the back of their leather vests.

It’s a dead give-away. Trust me on this.

So while the Reichsführer proceeds to trample upon the rights and freedoms of all motorcycle riders and tells lies about how all outlaw motorcycle club members are criminals, I would ask that thinking people consider the following facts…

There are corrupt and dirty cops everywhere, but no-one is thinking of proscribing the police forces.

There are drug fiends in our footy clubs, but no-one has declared all footballers to be narco-kings and banned them from drinking together.

The Catholic church is redolent with child-rapists, but no-one has declared it to be a criminal organisation and seized its assets.

Why is that? I am certainly more intimidated and appalled by police and priests who betray the public trust, than I am by blokes in colours.

The comparison with Adolf’s efforts against the Jews prior to World war two are so obvious as to be banal. Firstly, the Germans were fed a steady diet of propaganda about the Jews, and how evil they all were, and how, if they were not stopped, all of Germany would suffer.

So the Jews were proscribed. Their business and houses were trashed. They were subjected to intimidation, arbitrary arrest, their goods and chattels were seized without warrant, and they were monitored and placed on lists.

The Germans were told this was for the safety of the German people. And they believed this, because a lie, told often enough, becomes the truth. So when they started filling the cattle cars and sending them off to the east, Germany breathed a sigh of relief that this terrible scourge was removed from among them.

And exactly this is happening to the outlaw motorcyclists of Queensland – and other states are sure to follow. Now put aside for one second what you think you know about outlaw motorcycle clubs. I can assure you that unless you are in one, you know only what you’ve read in the media. And I wonder if you know police themselves admit that outlaw bike clubs are responsible for less than one per cent of all crime and are no threat to society?

Oh, and just as an aside, the laws won’t work anyway. Membership is booming.