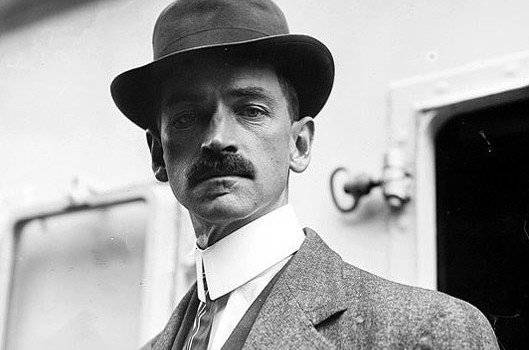 Glenn Curtiss was born in Hammondsport, New York in 1878.

He started racing bicycles at an early age. He got a job as a bicycle courier with Western Union, and then ended up opening a bicycle shop. 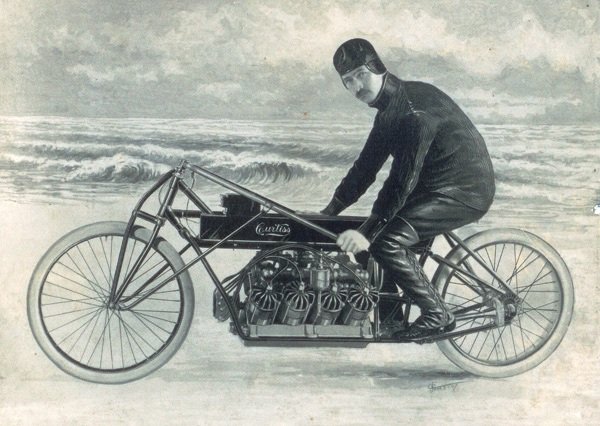 He started buying single cylinder engines and installing them in bicycle frames, but was never quite happy with the results. The engines, he thought, weren’t powerful enough, and they were too heavy; so Glenn started making his own engines. From scratch: one of his early efforts had a carburetor made out of a tomato can.

By 1902, his main business was manufacturing custom motorcycles, which he sold under the brand name “Hercules”. He was one of the first motorcycle manufacturers in the world. The Indian Motorcycle Company started making bikes the same year. Bill Harley and Arthur Davidson built their first bike a year later.

A Curtiss V-twin from the 1907 catalogue.

He entered his first motorcycle race that year. He didn’t win, but a lot of the racers were impressed with his fast, light and reliable machine and orders increased. In September of that year, a Hercules won “fastest regular or stock machine” at the New York Motorcycle Club Road Race.

In 1903, he was making two cylinder motorcycles. In May, he won two races on Memorial Day, including the New York Motorcycle Club’s first American hill-climb event.

The reliability, power and light weight of his two cylinder engine started to attract the attention of the aviation pioneers of the time, too.

In 1904, he took one of his machines to Ormond Beach, Florida to compete in the speed runs. He set a ten mile record of 8:54.4 (67.3 mph), a record that would stand for four years. The person who would break that record would be Glenn Curtiss. 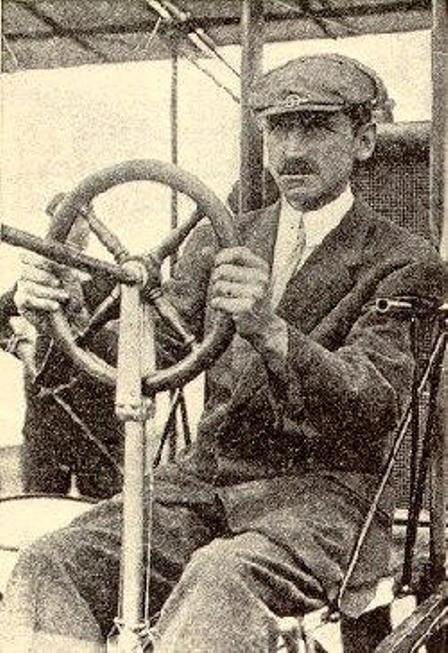 Glenn Curtiss at the controls of one of his early seaplanes.

By 1906, Curtiss was making some very advanced machines. One of them had a V-twin engine and a twist grip throttle – both innovations at the time. (The twist-grip had actually been invented by Sylvester Roper in the 1860s and then forgotten, but Glenn Curtiss resurrected the idea.)

Glenn started going to the Ormond Beach speed runs every year. He started to develop engines for aircraft. His experiments to get more power out of his engines culminated in the machine he took to Ormond Beach in 1907.

It had an experimental V8 aircraft engine in it. It had a shaft drive. It had no brakes.

Some who looked at it feared that the engine would tear itself out of the flimsy frame under acceleration. Glenn did too. He had the machine towed to 40mph before commencing his speed run (although this could have been necessary due to the lack of a transmission).

Glenn Curtiss was now the fastest man on earth. The next time a motorcycle went faster was twenty three years later, in 1930. In fact, it was quite a while before an aeroplane went faster.

He continued to make motorcycles into the World War I years, but became more involved in aviation.

One of Glenn’s last inventions – the Curtiss Aerocar.

In 1909 he attended the world’s first air meet, where he piloted the Curtiss machine that won the speed event: 10km at 75km/h. Runner-up was Louis Bleriot, who was later to be the first man to fly the English Channel.

In 1910 the US Navy decided that aircraft would be useful for reconnaissance. Curtiss moved to San Diego where he trained the first Navy pilots and developed the Curtiss Model D, the first aircraft to take off from a ship.

He could build aircraft faster than the buyers could build airfields, so he became one of the first to fit floats as aircraft undercarriages so the planes could land on water. 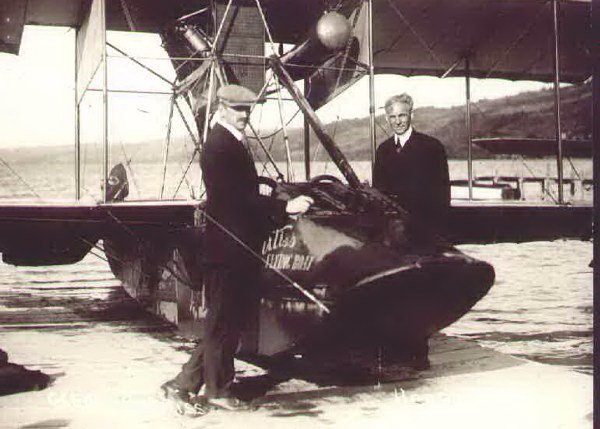 In 1911, he received the first U.S. pilot’s licence (the Wright brothers got numbers 4 and 5). He also produced the Triad A-1 seaplane, which had both wheels and floats. It was purchased by the U.S. Navy. And also by Russia, Japan, Germany, and Britain.

In 1912, he produced the first flying boat, the descendants of which were instrumental in dealing with German U-boats during the First World War.

In 1916 he got some huge orders from the US Government as they prepared to enter World War I. He ended up employing some 21,000 workers. 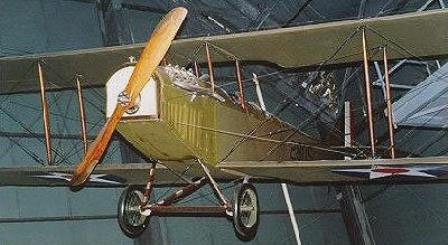 The Curtiss Jenny became the standard training aircraft for the US military in World War I, and the standard outfit of barnstormers and wing-walkers when they went war surplus.

After the war ended, Glenn returned to his first love, racing. But this time, instead of motorcycles, he raced his aircraft. In 1923, a Curtiss float-plane won the Schneider Trophy. And again in 1925.

He was doing well by now. In 1923, he went into property development, and founded the city of Miami Springs, Florida. In 1925, he built a mansion there. In 1926, another development of his became the city of Opa-Locka, Florida.

In 1928, he created the Curtiss Aerocar Company. The Aerocar was a type of car-towed caravan. 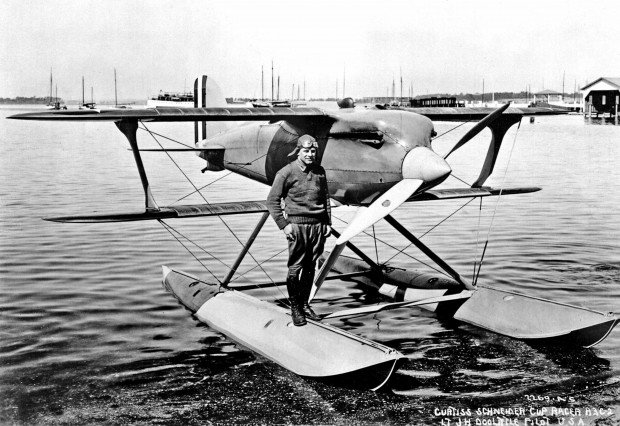 In 1929 he merged his company, the Curtiss Aeroplane and Motor Company, with the Wright Brothers’ Wright Aeronautical to create the Curtiss Wright Corporation. 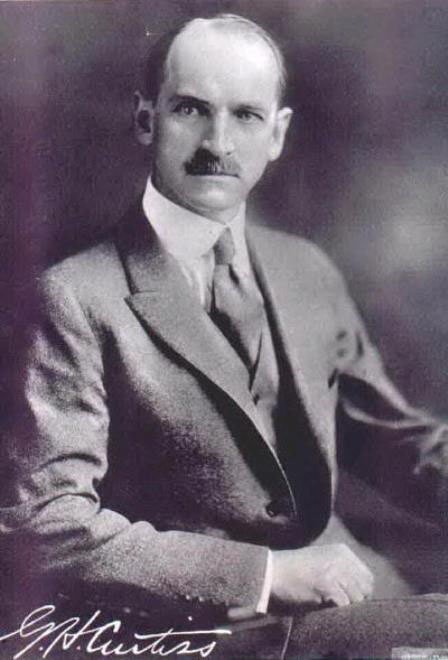 Glenn ruptured his appendix in July 1930. Surgery to fix it failed. He died on July 23.

The Curtiss Wright Corporation lived on. At the beginning of World War II, they shipped 838 Curtiss Kittyhawk fighter planes to Australia to fight the Japanese air force. While its high altitude performance could not match the Japanese Zero, the Kittyhawk airframe could withstand enormous combat damage, unlike the Zero.

One of these aircraft, serial number A29-133, is on display at the Australian War Memorial in Canberra. 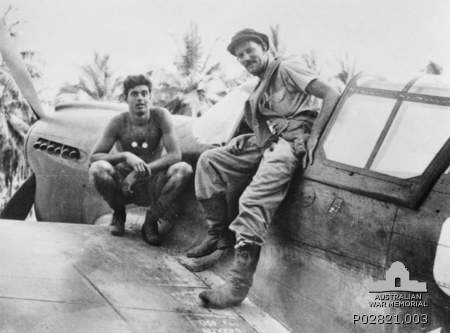