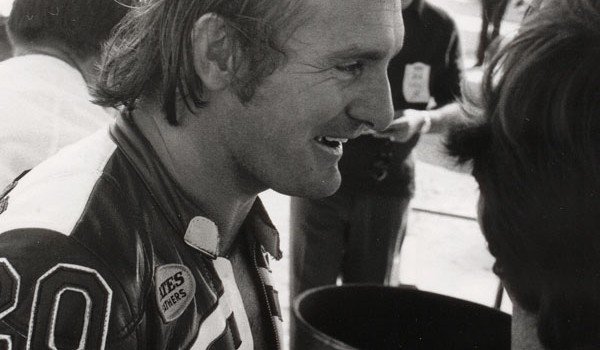 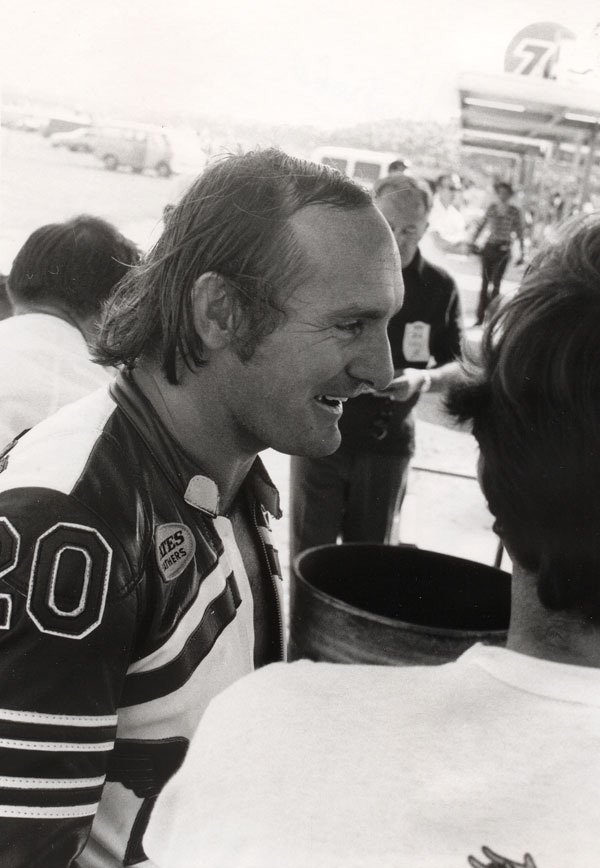 Mike Hailwood is still regarded by some as the greatest motorcycle road racer of all time.

He was born in 1940, the second year of World War II. His father raced before the war, and owned a large motorcycle distributorship, so Mike had his first bike at seven.

He didn’t know how to stop it, so he rode it around a paddock until it ran out of fuel.

He was a mischievous boy. He was once caught driving his mother’s Jaguar. He didn’t go that fast, because he couldn’t see over the steering wheel.

At fourteen, he got a James trials bike, which he used to ride around on the grass when he was home from college. His father once surreptitiously timed him, and found he was going faster than a grass track racer whom he sponsored.

Mike didn’t last long in college, worked in the family business for a while, and then his father sent him to work at Triumph Motorcycles. 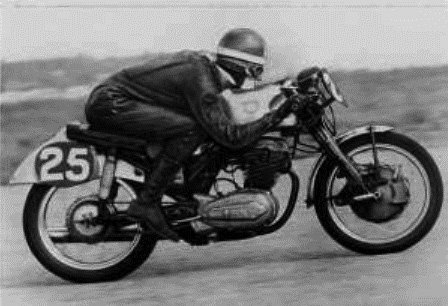 A few months later, he had his international racing licence. He wasn’t coming 11th any more. Every time he won prize money, he would use it to buy a better bike — first a 125cc MV Agusta, then an 196cc MV Agusta with a 240cc overbore job, and a 50cc Iton.

Later that year (1957) he travelled with his father to South Africa to further work on his racing skills. He borrowed a 250cc NSU from John Surtees. He made enough prize money that he didn’t have to give it back — he bought it.

When he came home in early 1958, he was the South African national champion. 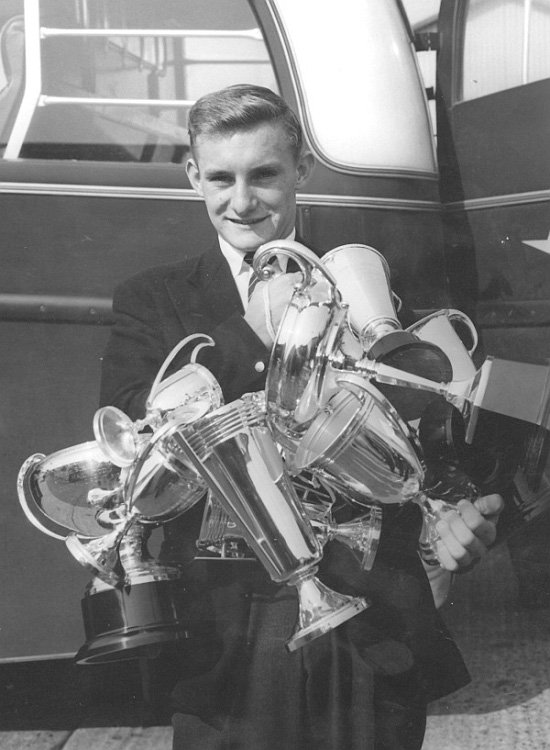 1958: Mike arrives back from South Africa with some pewter

He raced against them later in the 250cc Isle of Man race. Mike was on an eight year old bike. Carlo and Tarquino were on that season’s factory MV Agustas. Mike was leading when his ignition failed 50m from the finish line. 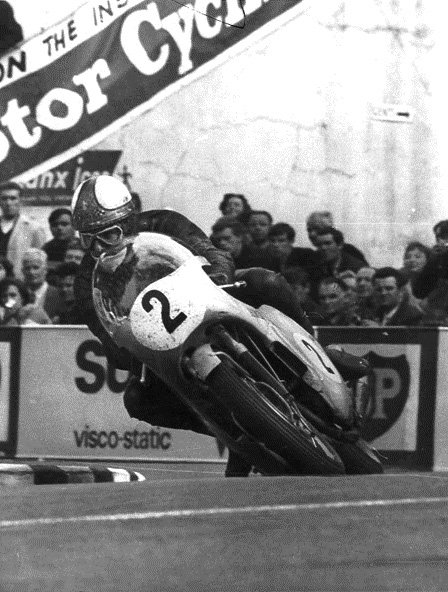 The legend of Mike the Bike hadn’t started yet. That was to happen in 1961.

Stan and Mike went to the Isle of Man. Stan had borrowed a 125cc bike from a new upstart Japanese motorcycle company called Honda.

In the 350cc race, he had a two minute lead with twenty one kilometres to go, when his Norton stopped with a broken piston.

In the 500cc race, despite having a bike which was 15km/h slower than Gary Hocking’s MV Agusta, he hounded Hocking until Hocking overshot a corner and took an escape road. Hocking eventually caught up, but then his Agusta broke and Mike won. In the process, Mike became the first person to average 100mph around the Isle on a British bike, and the first person to win three Isle of Man TTs in one week. 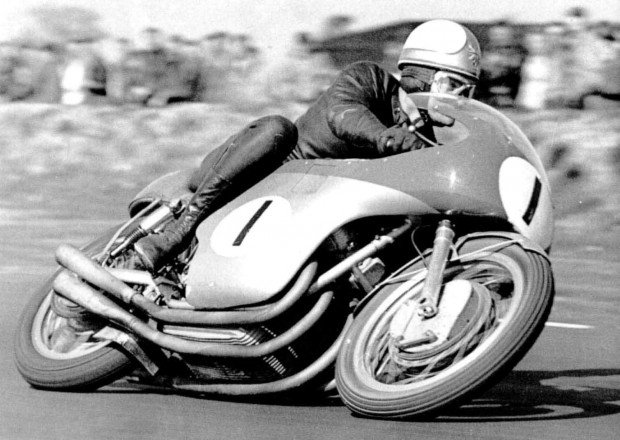 Mike removes some metal from the pipes of another MV four

He won the 250cc races at the Dutch, East German and Swedish TT, and chased Gary Hocking’s four cylinder MV Agusta 500 on his 500 Norton so hard that Count Agusta lent him works 350 and 500 MVs for the last two races.

Count Agusta invited Mike to join his team for the 1962 season.

In 1964, Stan and Mike decided to try for the hour record at Daytona International Raceway. Using a practice bike and normal tyres, Mike rode 144.8 miles in an hour, beating the previous record by about two miles.

That was in the morning. In the afternoon, he entered and won the United States Grand Prix. 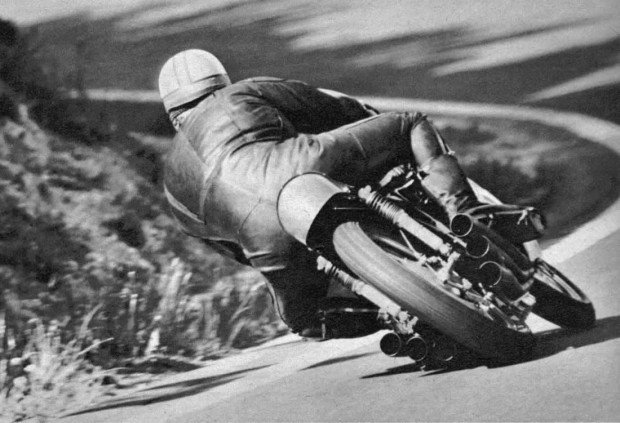 In 1965, Mike took the 500cc championship for MV Agusta again. However, the awesomely talented Giacomo Agostini had joined MV, and Count Agusta liked the idea of an Italian rider winning on an Italian bike. He started giving Mike inferior equipment. Mike left and went to Honda.

In his first season with Honda, he took the 250cc and 350cc championships, and came second to Agostini in the 500cc championship. He repeated this in 1967. Mike somehow got his bike to lean angles which were greater than his competitors could achieve, but he didn’t hang off the bike like modern riders do. He was famous for wearing through the leather on his boots so far that he would grind his toes on the road, with bloody results. And, perhaps as a result of his early grass track training, he would spin the rear wheel out of corners, too; a technique which was not widely used then.

He was riding Hondas which were then at the apex of how much power could be extracted from an internal combustion engine. There was a five cylinder 125. There was a six cylinder 250. And there was a four cylinder 500cc bike that was so powerful that Honda couldn’t build a frame that would contain it.

The next year, they squeezed even more power out of the 500cc engine. And left the frame the same. Witnesses reported the motorcycle wobbling severely as it went down straights. Another racer said Hailwood deserved a Victoria Cross if he dared ride it in an Isle of Man Tourist Trophy. He did. He pitted with a throttle grip falling off. The mechanics couldn’t fix it, so one of them tied it to the handlebars with his handkerchief. Mike re-joined the race and won. In catching up, he set a lap record of 108.77mph, which stood for eight years.
And then Honda pulled out of the World Championships. Mike left bikes for a while. He raced Formula 5000 and sports cars, as well as Formula 1 and Formula 2. He did quite well, but nowhere near as well as he had done on motorcycles. He came back to the Isle of Man in 1977. The Isle no longer had Grand Prix status (most riders thought it was too dangerous) and the promoters were willing to pay handsomely for Mike to bring some of his former glory back.

Mike’s dad was an interesting enough person in his own right. He broke his leg badly as a child, and it had to be broken and re-set many times. As a result, he was largely self-schooled for two years. He left school at 13, started working for a motorcycle repair outfit at 16, and started grass-track racing at 17.

At 21, he joined a motorcycle dealer in Oxford called Kings on a month’s trial. The boss was a bit reluctant to employ a cripple, so Stan insisted on being paid commission only. He retired 38 years later as managing director. He had made Kings the largest dealer in the country.

While doing so, he raced 500cc sidecars, competing against Jack Surtees among others. Jack’s son John would later compete with Stan’s son Mike.

Stan married twice. Mike was the last of three children of his first wife.

Mike was the most famous man on two wheels during the Swinging Sixties.

Between racing, parties and driving fast cars he managed to bed an extraordinary number of women.

They didn’t do safe sex in the sixties. Mike didn’t, anyway. He was well known in the hospitals close to the race tracks of the world for his regular penicillin requirements.

With his bike racing friends, he was the life of the party, enjoyed a drink, had a quick wit and loved practical jokes. He was apparently not as happy when he went to car racing. He believed he was looked down upon because of his motorcycling background.

He loved jazz, and he could play the guitar, the clarinet and the piano.

He met Pauline Fields, one of the main women in his life, when he was 19. She was an airline hostess. She later became an actor, and appeared in a few Carry On movies.

She eventually married Mike in South Africa after he retired, and they had two children, David and Michelle. Michelle died in the accident which killed her father.

He started twelfth in the TTF1 superbike class, but had a nine second lead at the end of the first lap, and won the race on his Ducati, beating the second place holder by about two minutes.

In the Senior race, the steering damper on his Yamaha broke. He came in twenty second.

He returned to the Island for the 1979 TT. In the F1 race, his Ducati lost its fifth gear. Mike finished fifth.

He had a factory Suzuki for the 500cc race. The mechanics were re-building the engine throughout the night, and there wasn’t time to sort the bike. He had steering damper problems again — the damper would stick on slow corners. Mike broke the 500cc lap record on lap three, and won by over two minutes. In the Classic, Mike was level with Alex George at the beginning of the final lap, and lost by two seconds.

It was his last race. He had a crash which interrupted further racing for a few years. While he recuperated, he helped run a bike dealership in Birmingham.

And on Saturday 21 March 1981, he took his kids David and Michelle down the road to get some fish and chips in his Rover. On the way back, a truck made an illegal turn in front of him. He hit it. His daughter Michelle was killed on impact. Mike and David were taken to hospital. Mike died two days later.

The truck driver was fined a hundred pounds. 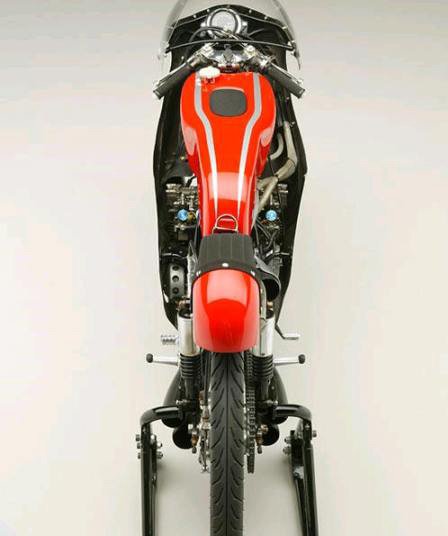 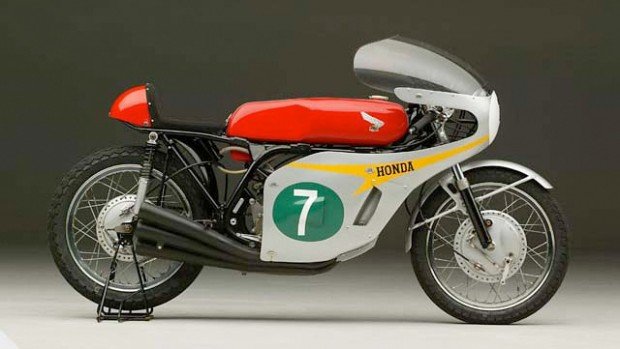 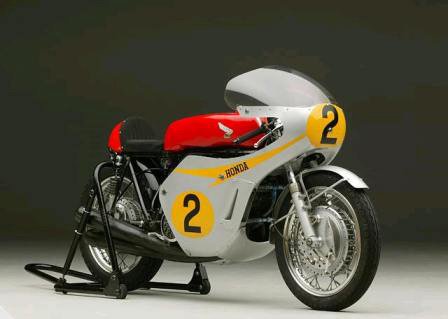