I first got a pair of Falco Shiro short boots four years ago. I wore them to almost to death. I wore them every day, and walked and rode thousands of kays in them – though I rode more than I walked – and they did not die. I can still wear them and they still serve. 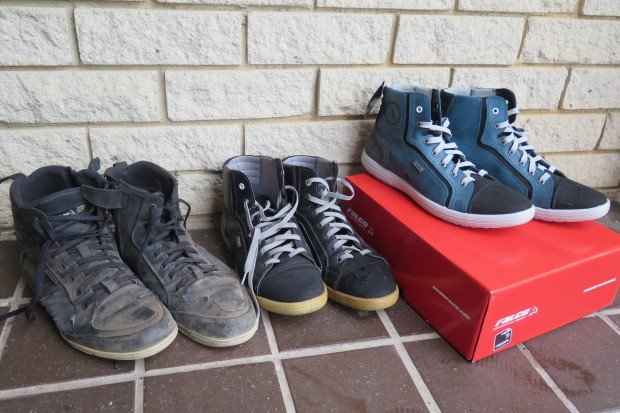 Two years later I got another pair. I also wore them on a daily basis and rode around Europe in them with one of my feet swollen to twice its size. Had it not been for the fact I could loosen the laces and fit my busted foot into the boot, I would have been forced to ride into Hungary barefooted. So don’t give me any shit about laced boots. I will not hear of it. They are practical in ways you might never have even thought of.

I now have a new pair, and I have no doubt they will also serve me as well as the last two pairs have. 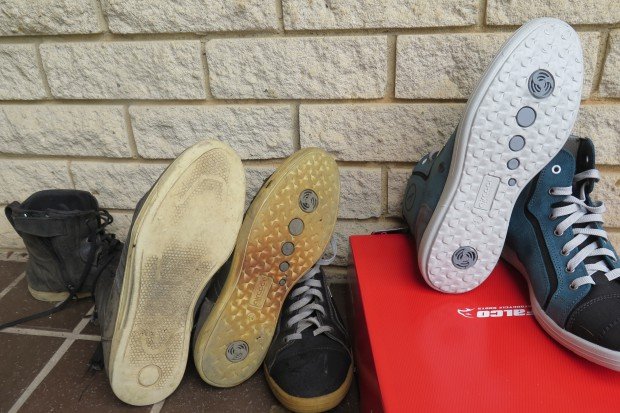 The first Shiro’s (left) did not have the air-flow system. The later ones have it. Air now flows through the boot, which is a nice thing, and stops the mank from setting in. They are as hard-wearing as anything I have ever worn. And I haven’t worn much else in the last few years. Love them.

It’s simple, really. They are comfortable from the moment you put them on until the moment you take them off. I have never looked at them in the morning and thought: “I have to put you bastards on again…”

They work, in terms of offering me the protection I’m happy with. No, they are not racing boots or MX boots, but then I am not racing or motocrossing, and I am not the kind of vapid monkey who believes in that All The Gear All The Time rubbish. I’ll just not fall off instead. It’s a much better option.

Of course, the fact they look like skateboard boots appeals to me.

Of course, they are not. They are rather serious motorcycle gear.

Hydrophobically-treated full-grain leather and canvas make up the boot, with D3O ankle-cups, and toe and heel reinforcement. D3O is a Pommy-made material also used in top-end Rukka jackets and is similar in performance to Held’s magical SAS-TEC armour. It’s soft and pliable until impact, then hardens to absorb the shock. It’s next-gen stuff in terms of armour. 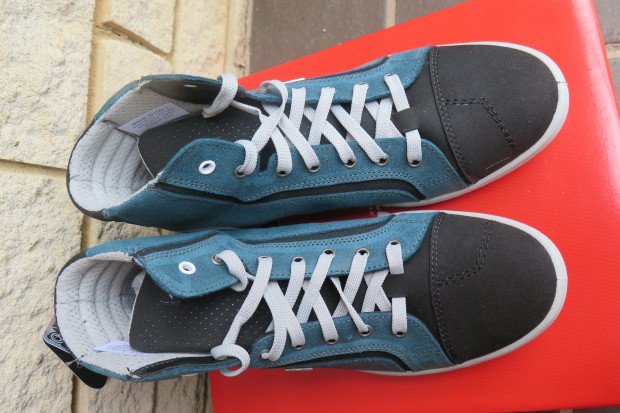 The Shiros are water-resistant but not waterproof, and meet the EN-13634:2010 regulation. The EN people test this by walking the boot 100 paces with water five millimetres above the sole. But yes, if you ride in the rain, water will still flow down into the top of the boot.

So I am very pleased my relationship with the Made-In-Italy Falco Shiro continues, and that my place at the pointy end of stylishness is further cemented. 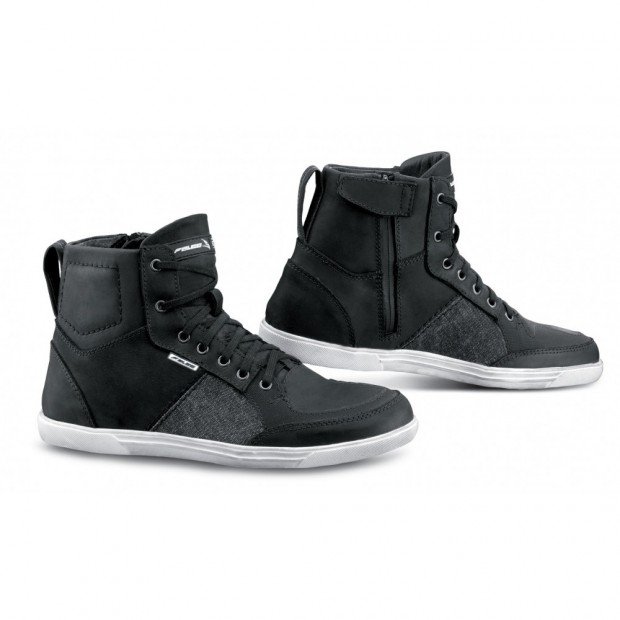 If you can’t rock the two-tone, they also come in other colours, and even a smell called “brown” for those who like their beards waxed.

So maybe something a little racier and sportier for sir?

Sure. I am all about racier and sportier. You should see me gamble.

Once again, this is a short boot, and if you have mighty Hulk-like calves, this is where you need to be shopping. 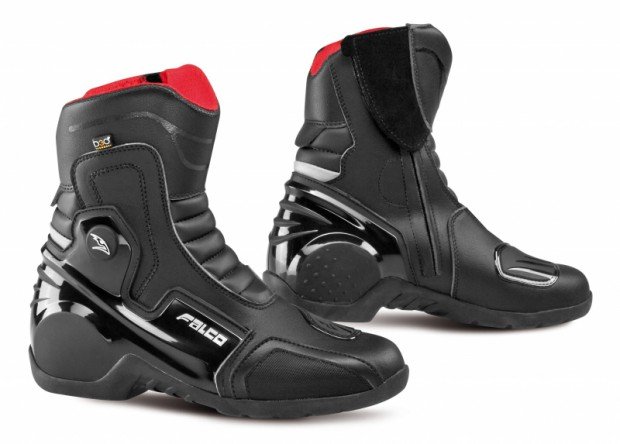 They come in all black, or black with a white GT sexy-stripe.

The Axis 2.1 is a much stiffer and more rigid unit than the Shiro, so I presume it’s meant to be worn when the expectations of tearing your feet off are higher. My expectations are always the same. If I don’t fall off, I don’t have to worry about that.

Anyway, the Axis 2.1 is very much a roadracing boot without the calf-bit, and comes in both girl and boy sizes. 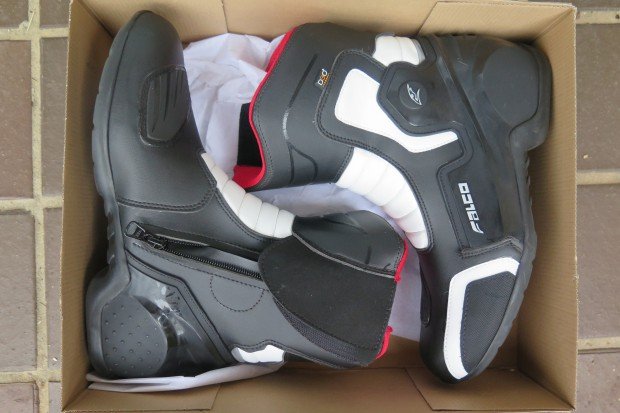 They gotta be worth a few seconds on the Windsor to Colo Heights blast.

It also claims “water-resistance” and has the same D3O impact-protection armour present throughout. It’s all Micro-Synth and High-Tex membrane made from melted dinosaurs and exotic radioactive rare-earth ores up the top. There is a dual-density racing sole on the bottom and the heel has a shock absorbing wedge for those spinning heel kicks when you’re entering the dragon. 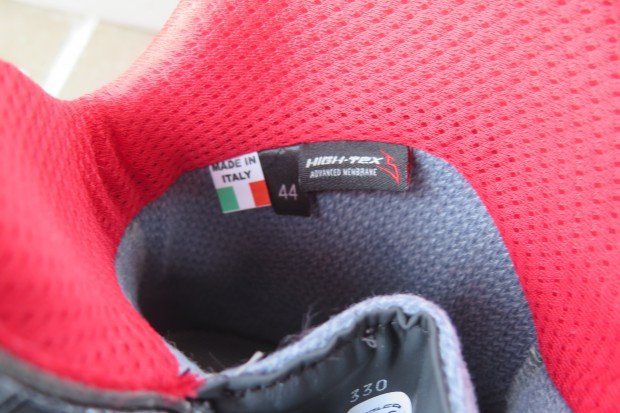 I like them. They feel solid and I have spent whole days in them. They’re still kinda new, so a break-in period is anticipated. But they are not annoying me or gnawing at my feet when I walk. They just feel “substantial”, which is what I would expect a short race-boot to feel like. 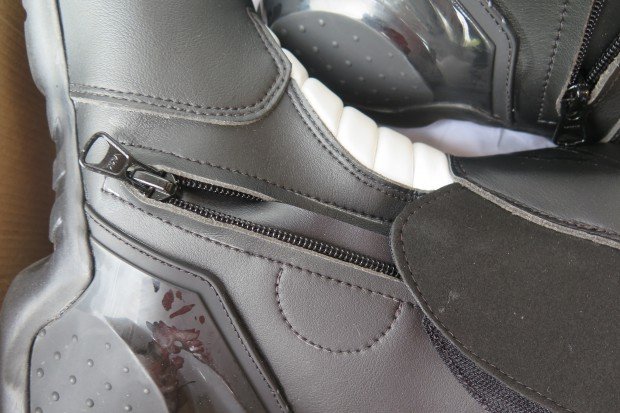 Quality stitching. No, that’s not blood…probably. 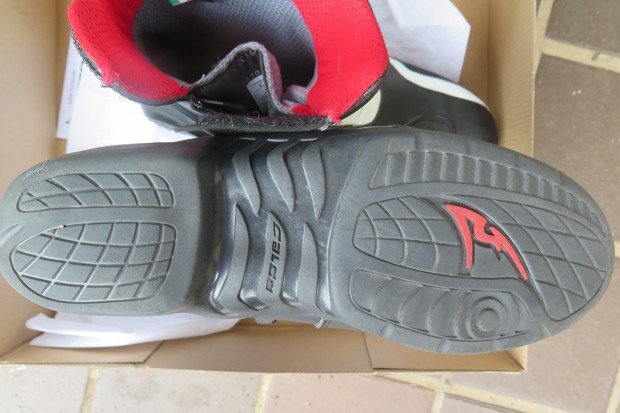 See? Just made to rest on Pole at the track.

I’m thinking these will be the boots I wear when I’m getting my MotoGP on, because appearance in those fast and flashy circles is everything. And I’m hopeful I can still cut a few moves on the dance floor.