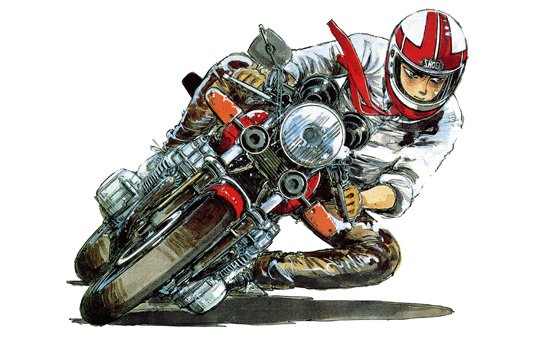 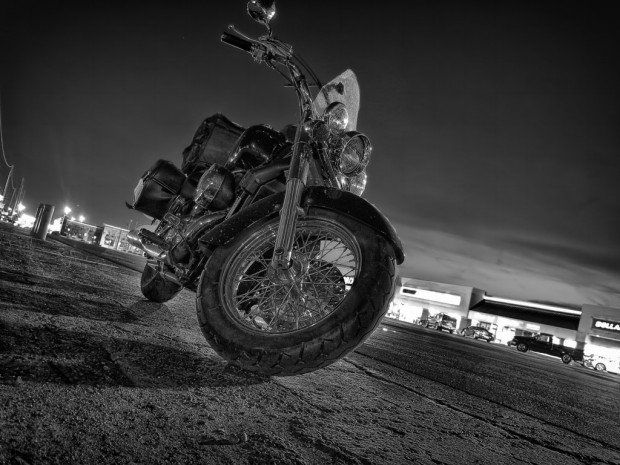 It was late when I rolled into the servo for fuel. Must have been around two am. Only werewolves, cops and nasty old bastards on stupid motorcycles were abroad.

It was also cold. Not teeth-achingly cold, but enough to make your moustache crusty with snot. No biggie. I only had about 30 klicks to go. Ice-death was not imminent and I needed fuel and cigarettes.

The servo only had one other customer, and he was probably cold too, but he was also transcendentally glorious. I could see that glory four pump-islands away, absorbing the otherworldly light of the hyper-orange floods like a leathery singularity. He was parked beside the air-hose and from where I was pumping fuel I couldn’t actually see what he was riding. But it was very black and very dirty and that is always a good sign. It also had a tatty L-plate jammed under the battered number plate, and that is hardly ever a good sign.

I hate L-platers. In the days before social media and the stupid LAMs thing came along they were tolerable. There weren’t many of them, they rode proper motorcycles, and were afflicted with the same ‘Ride hard, die laughing’ madness that chewed on us all. These days, they’re mostly whining, self-entitled, unskilled, perpetually nervous organ-donors who took up riding to try it out because it looked kinda cool, or imagined it was an economical form of transport (and how’s that misconception working out for you dickheads?), and consequently spend a lot of time on Facebook displaying depths of degenerate idiocy that beggar belief.

I topped up my tank, paid for the fuel, bought a packet of smokes and wheeled my bike over near his and lit up.

I am neither friendly nor sociable, and I have all the mates I’ll ever need. But at stupid o’clock on a chilly autumn morning when you wanna cigarette and there’s a rat-arse old bike, held together with filth and fervour and piloted by an L-plater who looks like one of Toe-cutter’s psychopaths parked in your smoking area, it’s gotta be worth a nod.

His bike was a spray-canned XS650 Yam from sometime in the early 80s. I didn’t know and he wasn’t sure. He’d made the pipes himself. He’d also made the seat and forced a set of presumably fake Laverda adjustable clip-ons into service above the triple tree. The entire bike was a hodge-podge of bodgey bastardry and teenage evil. There were a few Slayer and Megadeth stickers on the guards. On the tank, hand-painted skulls, dice, and words like “Crush”, “Hell” and “Crunt” flashed red and white against the paint. Wire, madness and hope held it all together. He’d sawn the chin-piece off his full-face and painted white fangs around the opening. There was a Yoshimura sticker on one side and a naked vampire slut sticker on the other.

His jeans were old, holed and stained, and his leather jacket looked like horses had been trampling it in a stable. He had wisps of beard, lots of acne and a glint in his eye that told me he’d grinned at Death more than a few times. He also smelled of alcohol and when he offered me a sip from his hip flask, I didn’t refuse. Even cheap-shit Scotch is better than no Scotch when one encounters a kindred spirit in the hours before dawn.

I lit another smoke and offered him one.

“Just got back from Adelaide,” he exhaled.

“Go alright?” I asked, nodding at the Yamaha.

He laughed. “Maxed it flat out on the Hay Plain, then ran out of petrol. Farmer helped me out. Leaked a bit of oil. Had some electrical shit. Spent two days in Forbes sorting it. Great trip.”

He nodded. “Best way to travel.”

I nodded back and thought of adopting him.

I gave him a few more durries (he’d run out of rollies and had put his last 10 dollars into the petrol tank), and rode home, smiling into the cold air.

All was not lost, I thought. There was still hope. Motorcycling may be drifting inexorably towards blandness, obedience and ultimately irrelevance, but not everyone is going quietly into that good and safe night. Sure there’s me and my fellow nasties, but we’re not all that long for this world. The warmth of the tar pits claims all the dinosaurs in the end.

But while ever there remains an L-plater with a can of black spray paint, a box of tools, and a determination not to drink the government’s Kool Aid of safety, conformity and subservience, the magic of motorcycling will call to them.

And they will answer.

I thank the Road Gods that they do.