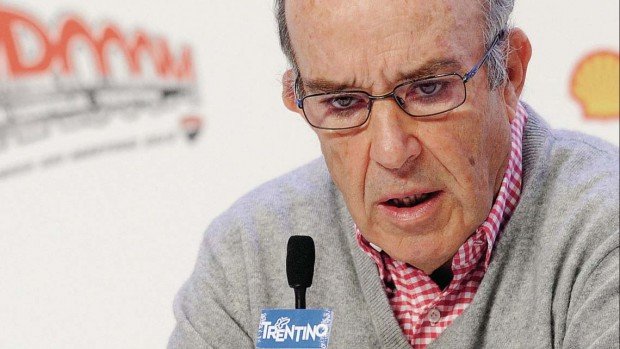 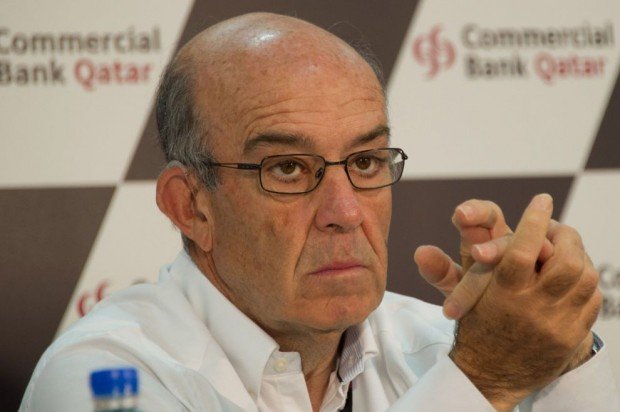 MotoGP faces a dilemma this week, as Dorna is on the verge of damaging its own product and harming one of its children. On Tuesday, Dorna announced FIM Race Direction’s intention to conduct a hearing into the contact between Dani Pedrosa and Marc Marquez, that resulted in Pedrosa’s traction control being damaged. Dorna’s representative confirmed “Everything remains open, ranging from sanction to no sanction.”

Race Direction is a multi-party body, of which Dorna is one member. But make no mistake, as the possessor of commercial rights, it is the sole powerbroker. The corporate success of MotoGP is largely due to Dorna’s administration. So what Dorna, and its frontman Carmelo Ezpeleta must not do now is respond to the controversy and choke its own success. Most of the problems Casey Stoner cited as his reason for exiting the sport were related to Dorna’s management of the series. They cannot afford to lose another superstar. 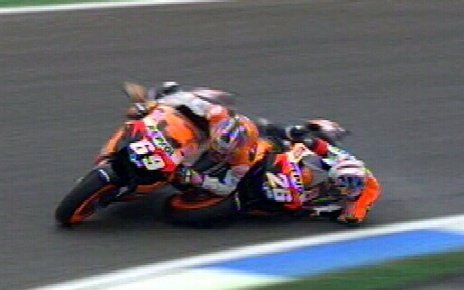 Remember when Repsol was Spanish for “teamwork”?

In the context of motorcycle racing, the incident resulted from the merest of contacts. The fact that it disconnected Pedrosa’s traction control is due more to the component’s exposed position on the bike than Marquez’ brushing contact. It was therefore, primarily a design fault by Honda. You can be assured the same flaw will not be evident when Repsol Honda unloads the bikes in Sepang next week. So what is there to review at the hearing? Nothing. Don’t yield to the hysterics of those who are crying foul at Pedrosa’s championship chances being curtailed. This was a racing incident. Unfortunate, but nonetheless a racing incident. Alberto Puig will cry. He will spit the dummy, wave his hands about while spouting all manner of Spanish profanities, but he will get over it.

Moreover, there are 3 seconds of Dani Pedrosa’s life at Estoril in 2006 that negate any right he has to complain about another rider impacting on his race, or his championship prospects. And remember that Pedrosa escaped sanction for that incident.

Is it not the role of Race Direction to police riding standards within the course of the race? This was not a last lap incident. It occurred on lap 6 of a 23 lap race. If Race Direction, or the track marshals cannot adjudicate on an incident like that within the race itself, they are clearly not qualified to administer a world championship grand prix.

Coincidentally, this week MotoGP’s main motorsport competitor, Formula One, handed down a penalty to one of its stars that highlights how they are slowly but surely killing their own baby. Mark Webber was handed a 10 place grid penalty for the next round after hitching a ride to the pits on Fernando Alonso’s Ferrari at the conclusion of the grand prix. 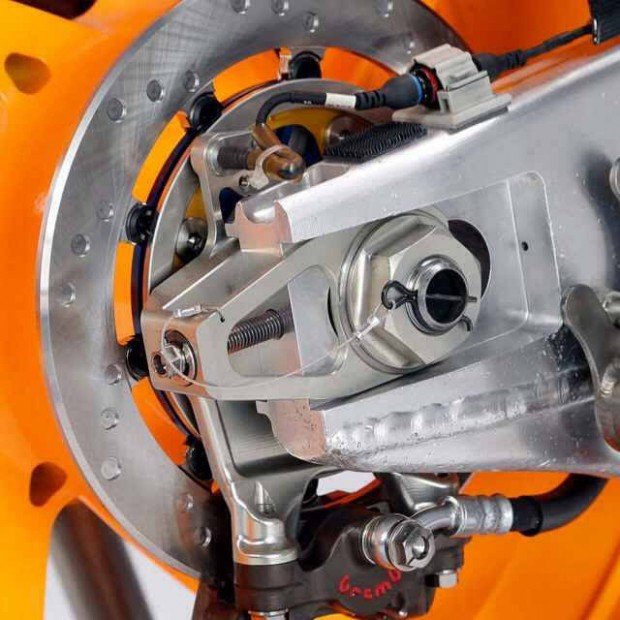 Before Marquez came to visit 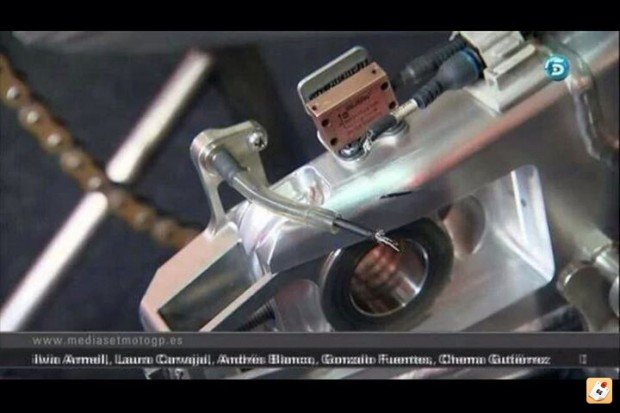 After Marquez came to visit

It’s a practice that’s been around as long as the sport itself. One driver giving another competitor a lift on their car after theirs has broken down or crashed has been a frequent sight, and is a tremendous symbolism of sportsmanship in motor racing. Or at least what remains of it. The image of Senna hitching a ride with Mansell is one of F1’s most enduring images. In delivering a penalty to be administered at the next round in Korea, the FIA’s kneejerk has corrupted the result of that race before a car takes to the track. In a race where most of the real competition is in the run to the first corner, Mark Webber may as well go fishing instead of travelling to Korea this weekend. 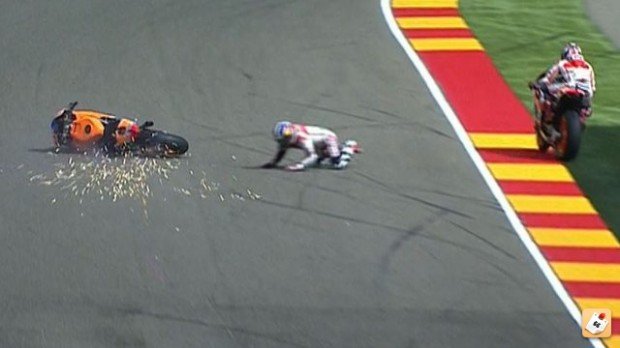 The FIA are strangling Formula One through over-regulation. They go through phases of it from time to time, and they’re peaking at the moment. Mandated combinations of tyre compounds, pit stops and other such red tape are gradually killing what was once a great competition. Despite their efforts to make the racing more diverse and exciting, the competition is still dominated by one driver, a talented sociopath. Their grands prix are devoid of the excitement and personality that define MotoGP. F1 spectators are there for the brands and the sideshow, the racing holds nothing for them any more.

MotoGP must not follow down this track to demise. The lesson is simple: If it’s not broke, don’t fuck with it. 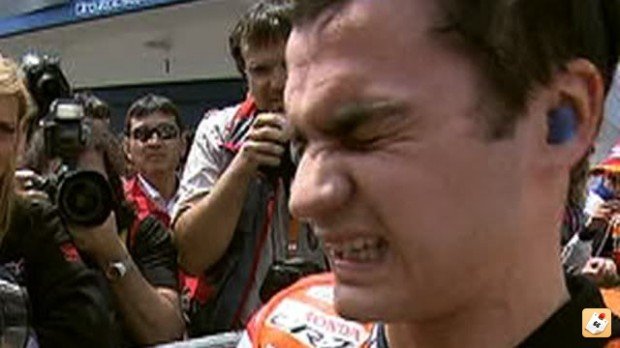 This is his cranky face

If you want to review the consequences of the failure of a safety-related feature of the bike, by all means go ahead. But do not summon the kid who has raised the excitement levels of the sport and dangle the threat of punishment over him. Whether he’s penalised or not, this process is unnecessary, and is interfering in the most exciting championship battle we’ve seen since the nineties. We are entering the final stages of a nail-biting championship battle, and you’re making the championship frontrunner prepare for the next grand prix with the threat of punishment looming over him. Get your foot off his throat.

Marquez is bringing a new generation to MotoGP. Kids who are too young to have watched the brilliance of Rossi at his peak will come to the track now to see Marquez. Do not stifle his brilliance and enthusiasm by trying to appease the sooks and sycophants in the paddock.

Do you want to reduce MotoGP to a conservative contest between the likes of Bradley Smith, Ben Spies and Andrea Dovisioso? The Fédération Internationale de Mediocrity world championship?

The superstar Marc Marquez is a product of the system established by Dorna, so it will be a tragedy if Dorna intervenes to tear him down. The future, as usual, is in your hands Carmela. Don’t fuck it up.

By the way, I arrive in Kuala Lumpur on Thursday afternoon. Giz a ring if you want me to come to the hearing and offer some common sense.