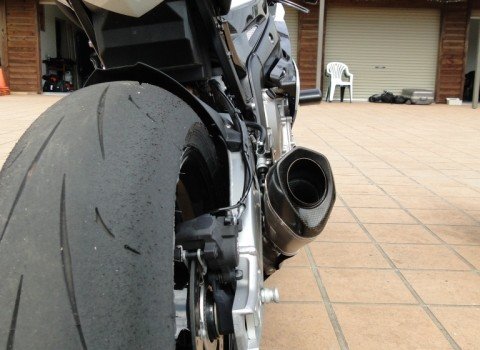 DOWN ON THE FARM

A one on one course with Top Rider will really improve your skills.

I think there is an expectation that you probably complete Levels One and Two before the private day, and get to a reasonable pace, and these two levels give you some basic track training on trail braking, power application, body position, quick steering, gripping the bike, etc.

The flow of the one on one day is to go out initially and do a sighting lap and try to learn the lines through the corners. Best is to keep the pace steady and just learn corner position. The instructor (Shawn Giles in my case), will then swap to running behind you for a lap or two and video you on the track as you start to push a bit faster. 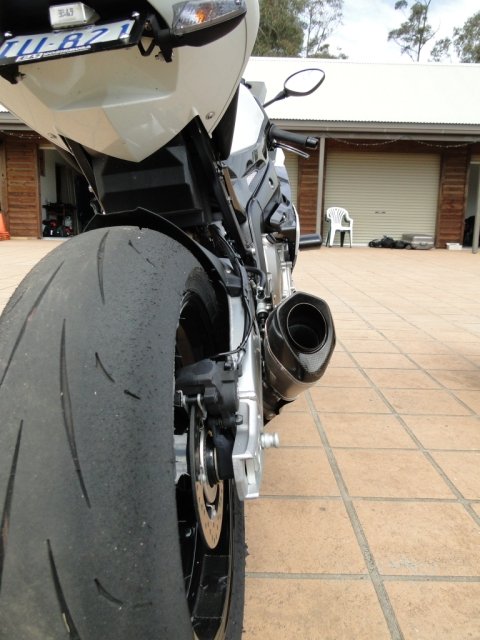 Dunlop’s NTEC GPa11’s Supersport control tyres gave me an advantage over Woodley. And I needed any advantage I could get. Shawn Giles had the same tyres as me.

The video is then played immediately after you get off the bike, and the instructor talks you through things that you could have done better. It’s very clear on the video if you are not using the right technique.

I had a couple of issues in wrong hand position causing me to have the throttle partially open mid corner when it should have been closed, I wasn’t looking ahead far enough through the turns, and I had both legs come off the tank when dropping in and knee on the deck. It did look a bit stupid, and was easily corrected once I’d seen it on video and had it explained to me.

It was a repeated exercise right through the day as the pace increased, and whilst I could never keep up with Woodley or Shawn, I didn’t embarrass myself and always at least had them in sight on the straights.

The BMW was actually harder to ride than my Ducati around a tight and technical track like this. It has a huge top end rush which had me constantly fighting wheelies, but not enough grunt in the mid range. If I tried to use the top end, it needed very careful throttle control which I think actually slowed me down compared to my lower powered Ducati. I had brilliant tyres in GPa 11’s which was the same as on Shawn’s bike, and I think these really helped with fantastic grip through the corners.

Only a couple of moments for the day including a fairly big front end lose prior to the ses (which I managed to gather up), and really leaving the braking too late on the back straight, which had me pumping the ABS trying to slow the bike before heading off the track. Having said this, with Shawn’s coaching, I quickly learned the track, got much smoother, and up to a reasonable pace….which I wouldn’t have been able to without such intensive training. Once off the bike, the training looks like this: 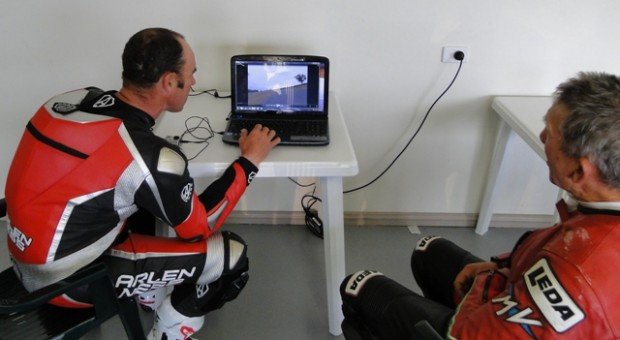 This one-on-one discussing the details of your laps is amazingly effective in improving your style, especially as you know that next time you’re out, everyone will see if you’re repeating your mistakes.

A few notes about how I felt about it, so you can get context if this fits for you:

My natural riding environment is dirt, and I am very comfortable having grown up racing a dirt bike in any conditions: hard pack, mud, deep sand, rocks etc. This is where in relative terms I am fastest and most comfortable. Next is the road, where I always sit on the speed limit where I think the cops are present (ie. the straight bits), but in the twisty bits I like to take the bike’s tyres to the limits. I don’t mind a bit of “slide at either end, recover, keep going” kind of thing. This is a similar style to the dirt I guess. I always take it relatively easy on corner entry, just in case there’s an obstacle coming the other way, and power out fairly hard when I can see the road/bush track is clear. 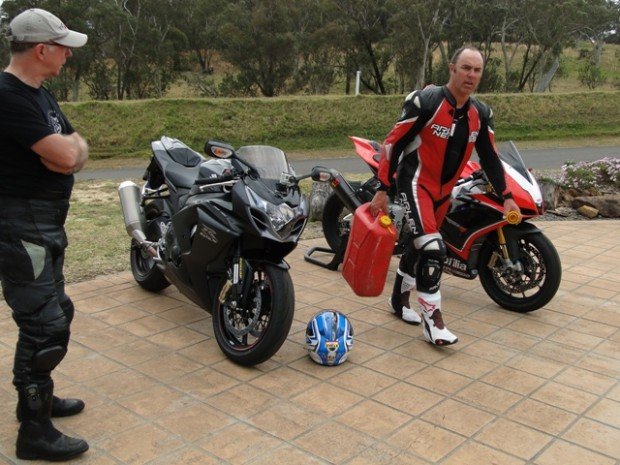 I have thirty years of consistently riding this way.

So in terms of schools: I never went to Superbike school, because I didn’t want to have to sit through the slow stuff. When Bernie Hatton came along offering an accelerated Level Two course, I took it and was taught the basics I already knew, but also things I didn’t know, including track-specific body positioning, locking on with core strength under brakes, looking though the corners etc.

I didn’t really need trail braking or grip because I’ve lived that for so long. Honestly, I felt like i could have learned the Level Two stuff in a morning, and would have benefited by riding the track and being critiqued in the afternoon.

This doesn’t happen, and Level Two takes an entire day.

In saying this, Bernie Hatton is a fantastic coach, and his style meant that I could absorb things very quickly. This one-on-one day was a whole other league – it was very challenging and I learned much more than expected. It was personally challenging to try to keep up with Woodley and Giles. This really stretched everything I learned, and early in the day I was screwing it up. Towards to back end of the day I had good pace….probably 90% to 95% of Woodley’s pace and they were hardly waiting for me at the end of each lap. 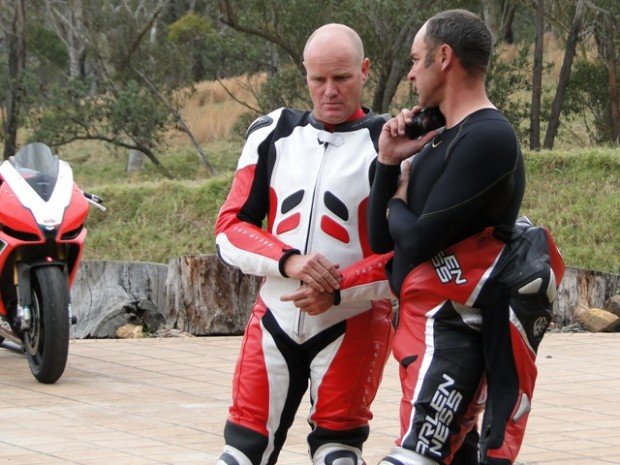 On watching the videos it’s clear that I have much the same mid corner and corner exit pace, but corner entry is hesitant compared to them. On refection I think this hesitation comes from thirty years of corner entry programming, that while I still have a good pace for the dirt or road, there’s always a plan B in case on on coming 4wd or kangaroo or bike etc. and this was causing the hesitation on the track.

That became very clear when watching these guys out brake me so easily – because you don’t need to hesitate on a race track like the road. I did try to let the braking go late, but it was against every instinct I had and I nearly ran off the track. So I had to settle, go slow, think about everything, and progressively wind back on the pace; at which point I improved a lot, but never to the point of Woodley and Giles, who are incredible to watch on the brakes and on entry, especially to high speed corners. 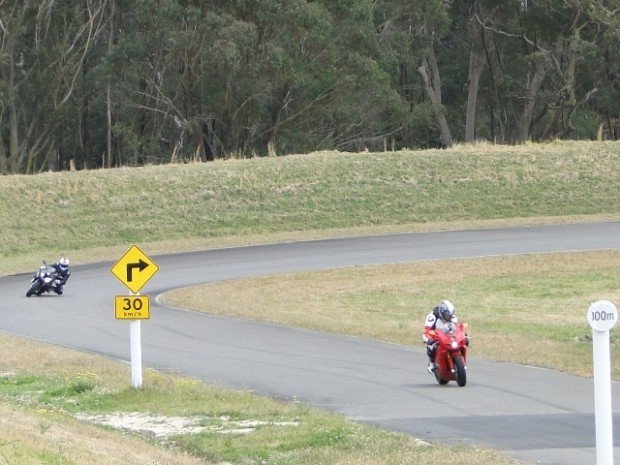 Just to confuse you, they face the Speed Advisory signs the other way

Shawn Giles is a very laid back character that is easy to talk to, but also incredibly fast on a bike. I must say this day, with these guys has made the single largest difference to my road track riding style, and I am still pinching myself to believe the experience. I really thinking guys like my friend Luke, who is already very quick, with a very high level of skill on the road would really benefit from a similar experience. Anyone at a lower level of skill would be accelerated out of sight by doing Level One, Two, and then one on one stuff.

I can’t speak highly enough about this experience. Whilst I was invited, and was fortunate enough to run with Woodley and Giles, there are four other coaches, including Bernie, who is a stand out communicator and great rider.

The track in NSW is private and only available through Bernie and his Top Rider school. If you are interested, you should go to the top rider web site and have a look. It’s really not so expensive, and the results and experience is fantastic.