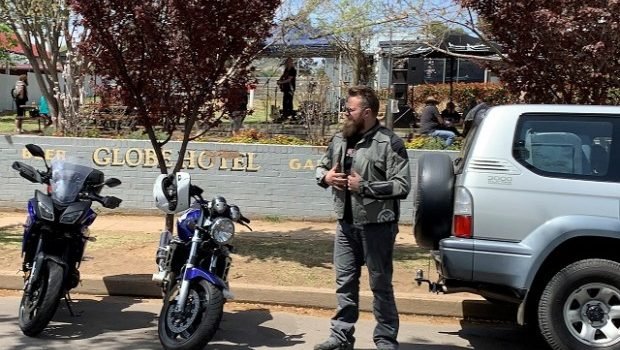 We got to the Globe Hotel at Rylstone before one. Usually I get there approaching two. We took our helmets off.

“Well that was spirited”, said Gonzo.

We went indoors and ordered beer and food. I was still buzzing on adrenaline. “When you pulled out to pass that car on the ten-mile and I followed you”, I said to Gonzo, “the Tracer power wheelied. It’s never done that to me before.”

“That saddens me, Al”, said Gonzo. “You’re not accelerating hard enough.” He is an empathic man, and a great believer in the healing power of wheelies. The front tyre of his CB1300 has a contact with tarmac which is fleeting at best.

The man in black with the guitar and amplifier out in the beer garden started complaining that he was stuck in Folsom Prison.

It was the third time I’d ridden the Bylong Valley Way in a month. The first time was with Craig and the new guy from the office. The second time I went out west to Ben’s joint and then met Boris and his wife for lunch at the Globe the next day before coming back to Sydney via Singleton. And this time it was with Gonzo because it was a double demerits weekend and we needed something to thumb our noses at.

The last time I rode the Putty northbound I was visiting Boris. There was dead wombat on the racing line on a blind corner coming the other way. There was nowhere safe to stop and move it without having a dead wombat, a Yamaha MT-09 Tracer and Al on the racing line on a blind corner. I deduced that in the intervening two weeks some Nimrod probably hit it coming the other way by the fact that the blood god had demanded nothing from Gonzo and me on this run.

We had lunch, and another beer, and moved on. We’d seen three Highway Patrol cars before they saw us on the way up. We saw another one hiding outside Lithgow. We went up Scenic Hill at high revs in low gears and leaned WAY over on the sides of our tyres, and did the same at Mount Tomah forty kilometres further on. We stopped again at the Archibald at Kurrajong Heights to top up the beer levels.

Gonzo asked if I was still loving the Tracer after three months. “I should have bought one years ago”, I told him. “I nearly did, but I was concerned about its range. I ended up buying the Strom for its ten percent larger fuel tank. It turned out the Tracer got fifteen percent better fuel consumption.

I turned up late to work after the long weekend due to a dermatologist appointment. The quack wanted to burn some suspect skin off my forehead with liquid nitrogen. “Will I be able to wear that?” I asked, pointing at my helmet.

When I got to work I told everyone that was interested about my ride, and that I was chuffed that the Tracer power wheelied, despite having traction control turned on.

Two days after the dermatologist visit, there was a circular scab on my forehead that looked like the letter O. One of the product team asked me what it was. “I’ve just joined a club”, I told her, “and one of the rules is you have to have the letter O tattooed on your forehead.”

“What club is that?” she asked.

“What’s that all about?” she asked.

“The aims of the Simple Origami Club”, I told her, “are two-fold.”

The next day a segment fell out of the O and the scab looked like a C. Everyone ignored it.

“Aren’t you going to ask me what the C on my forehead stands for?” I asked the boss.

“I think I already know”, he said.