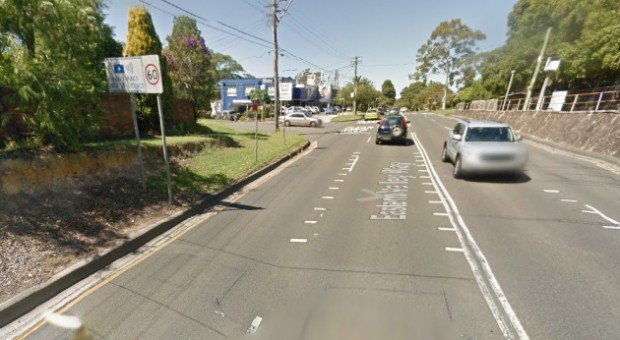 Things get busy as you crest the hill heading south on Eastern Valley Way. There’s a ridge on the left, and then two streets intersecting. They’re only a few metres apart. Vehicles in those streets don’t have a good view down the hill due to the ridge, so they can pull out in front of you. Also, cars coming the other way can turn across your path into one of those streets.

A bit further on, there’s a street on the right. Traffic queues to turn into it, and you have to watch for cars coming up the hill that see the queue and change lanes on top of you to avoid it.

It’s a dangerous place, so in the middle of this, the state government has seen fit to install a speed camera.

I crested that hill the other day, and I could see the camera and the marks indicating the piezo sensors in the road. I looked at my speedo, and when I looked up, there was an oncoming car making a right hand turn across my path. A car turning right from my left started to pull out at the same time. The car turning across my path saw me and braked, cutting off the other car, and I performed an emergency stop.

The guy who stopped was making apologetic gestures to me. I couldn’t care. I was stopped over the crest of a hill, there were two cars blocking my path, and I was worried about being hit from behind.

This death trap was designed by the NSW Roads and Maritime Services Department. Someone was paid money to come up with the camera idea. He or she probably didn’t sell it on the basis that it was a dangerous collection of three intersections and a hill. The only thing which justifies that camera is revenue.

If a business endangered people’s lives in order to maximise its revenue, there would be a public outcry, and the owners would probably be charged with a criminal offence and sentenced to a lengthy term in prison. For some reason, I haven’t heard of the incarceration of the bureaucrat responsible for the Eastern Valley Way death trap.

I thought things were improving for a while. A few years back, Sydney Lord Mayor Clover Moore declared that motorcycles could park for free in places where cars were charged to park. It was probably the only sensible thing she’s ever done, but good on her. She also turned most of the parking spaces into bicycle lanes at a cost of many millions of dollars. They’re mostly unused. Sydney is not Amsterdam. It’s a hilly city, with an ageing population. But let’s not dwell on that.

A few years back the Roads and Traffic Authority (as it was called then) ran a billboard campaign instructing motorcyclists on correct cornering lines. Kudos to them for this.

Late last year, the NSW state government allowed motorcycles to lane split on a trial basis in parts of Sydney. A holocaust failed to occur, and five months ago it became legal for motorcyclists to lane split in traffic state wide. I applaud this initiative.

And a new campaign has started. There’s a TV ad demonstrating the hazards of various situations like riding too close to the centre line on turns and passing a vehicle which obstructs your view and is turning left. It appears to have been created by sensible people, and makes valid points.

Part of it is the Ride to Live web site. You get to test your skills by driving a virtual motorcycle with your computer. I decided I would try the commuter test. I used my arrow keys to accelerate the worst handling virtual motorcycle ever along a busy street crowded with parked cars.

The first time I tried, the simulation stopped in a few seconds with the message “TOO FAST! Keep an eye on the speedo. 52km/h”.

The second time I tried, the simulation stopped in a few seconds with the message “TOO FAST! Keep an eye on the speedo. 51km/h”.

Because, kids, when you’re riding a motorcycle along a busy street with parked cars opening their doors in front of you, pedestrians stepping out in front of you and cars turning across your path, the most important thing is to WATCH THE SPEEDO.

There’s an even chance that some poor dumb learner will take this bullshit seriously and kill him or herself. And when it happens, there’s a better chance that the person responsible for the simulation will remain unpunished.

Good luck if you find yourself riding your motorcycle in front of her.