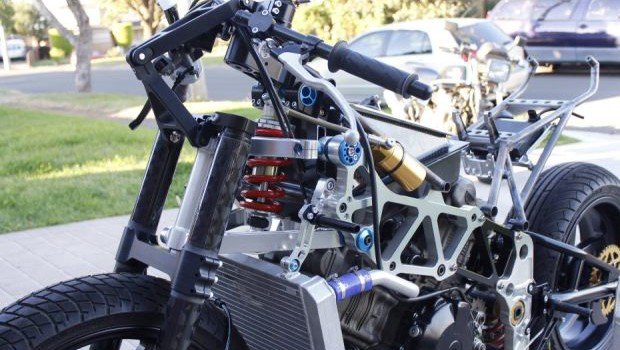 Don said he would ask Mario if he would make a bracket to put a twin-pot caliper on the front of the KLR, and Mario said okay. We arranged Sunday, and Mario emailed me that he forgot, that was MotoGP day, and he would have to change the time, unless I wanted to watch the MotoGP with him.

I emailed back that I DID want to watch MotoGP with him, and that I would bring refreshments.

I brought some Fat Yak and some Spanish jamon prosciutto and some Sicilian olives and a bottle of Mario’s favourite whiskey. Don turned up, too.

Spending time with Don and Mario is an educational experience. On a scale of one to ten, where one is getting a university degree in gender studies and ten is getting to Kansas City on a Friday, I reckon it would be a bit over nine.

The education started before the race, when Mario showed me his race bike, which he says he has almost finished building. He likes the Hossack front end, as all thinking men do, and built one out of the best components he could source. He found that there was a fair bit of stiction in the rose joints, so he scrapped that design and built one with a suspended headstock and tapered roller bearings.

He made the fork legs out of carbon fibre and the bearers for the axle and disc calipers out of alloy, and glued them together with the glue that they use on Formula One car monococque chassis. He wasn’t sure about the strength of the join, so he got a guy with a crane to use one of his fork legs to lift a two tonne weight, and then drop it and catch it before it hit the ground. It didn’t break, so he figured that was strong enough. 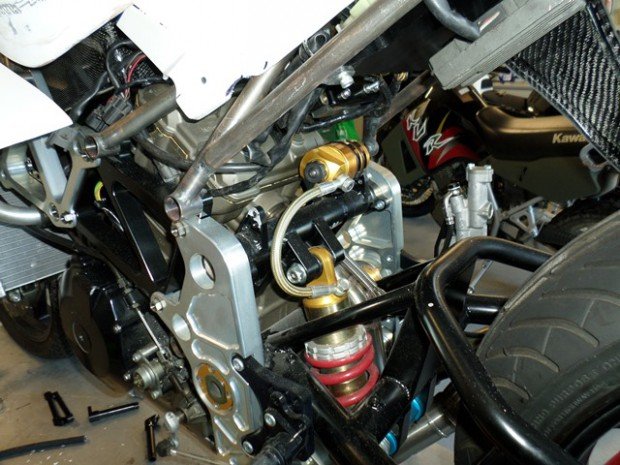 I wandered around Mario’s garage and wondered and marvelled and took a few photos, and then the race started. We disported ourselves in front of the large screen television and drank Fat Yak and Crown Gold and ate jamon prosciutto and marvelled at Marquez’s crash, and Bradl’s crash, and Crutchlow’s crash, and worked out they were all doing the same thing when they crashed.

Don drove me to the railway station after that. I went home, and commuted on the VFR800 for a week and a half until Mario texted me a photo of the bracket and said come over and pick it up. 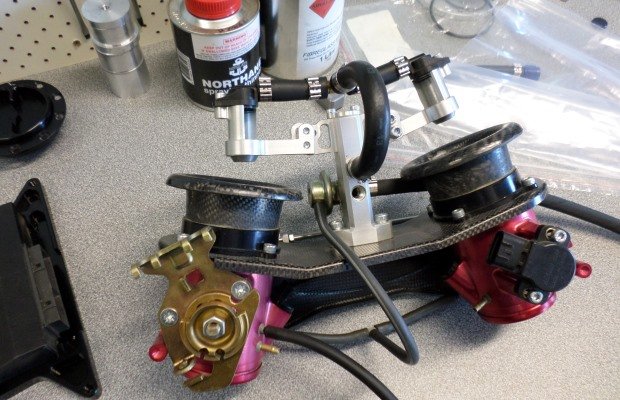 I caught a train and a bus and got there and tried to give Mario some money, but he said the whiskey was enough. He told me he had purchased a new toy: an RC30.

I rode home and fitted Mario’s bracket. It is a work of art. I fitted the SV650 caliper and bled it, and took the bike for a test ride.

After having replaced the lines with braided steel ones, and the disk with a larger diameter one, and the caliper with a dual piston one while leaving the stock master cylinder on for the hydraulic advantage of its small piston, I have to report that the front brake is less crap than it was.

The Fisherman parked his car in the garage next to mine as I was tidying up. He asked me what I was doing and I said I had just replaced the brake on one of my motorcycles. He looked at the motorcycle in question and asked me what type it was. I told him it was a Kawasaki KLR650.

“Well,” I told him. “Hillsong are a cult. I’ve never met anyone who thought its members were particularly bright.”