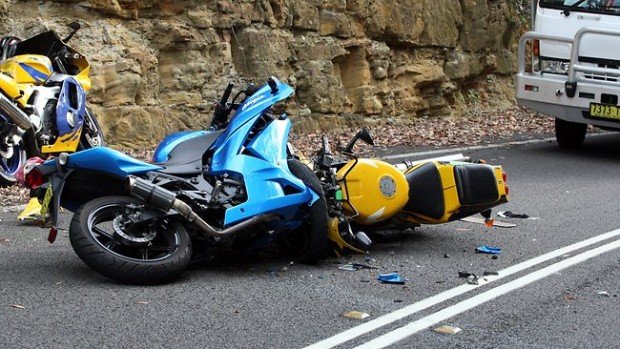 Please remain calm, L-Platers. Do not scurry off and hide under the furniture, trembling like wild fawns, slick with the sweat of your own fear. I am here to help you. Honest. This will not take too long and there might even be something worthwhile in what I’m going to tell you.

Certainly, you do need to be told, because whatever you’re being taught in those ludicrous government motorcycle courses is not really helping you, is it? Oh, I know you think it is, but you only think that because you don’t know any better.

I see you on the roads every day and I am of the view that most of you will soon be quite dead, or maybe leaking into plastic wound bags as you try and regrow your pulverised organs. I don’t much care about that, but I do care that some smelly RTA twonk will make mileage out of your misfortune and enact yet more draconian anti-motorcycling laws. And that’s when your incompetence begins to affect me.

Eventually, society will sell the souls of its children in the name of ‘safety’ and that’s when you Generation Y dickheads will really need to go and find somewhere to hide, because that’s when I will be coming for you with malice in my heart and dum-dums in my magazine.

And yes, it is you Gen Yers that should be concerned, because it is precisely your age group that is deciding motorcycles are for you. That is why you make up the largest proportion of newly-minted L-platers. Apparently, you’re the ‘entitlement’ generation, ie. You feel that life and the world owes you something and that stuff, in general, revolves entirely around you. This is why I have such enriching surges of nausea every time I hear one of you whining about your lot in this life.

Now pay attention. I know most of you can read simple sentences, and I won’t use any big words, OK? What I’m going to tell you might, at the very most, save your worthless hide, but at the very least will keep me from beating you with your own shiny new helmet the next time your stupidity leaves me stranded between cars in traffic.

First up, lane-splitting. Do it. You did not buy a bike to sit in traffic. If you want to do that, you should’ve kept your hatchback. And remember, when you wobble up to the front of the cars stopped at the red light, move over a little bit so that the screaming tattooed psychopath behind you isn’t left jammed between two lanes of hateful traffic. It’s not hard, and it will certainly save you being pushed into the intersection by the psychopath’s bike so that trucks can run over you while he laughs and points.

Secondly, don’t shake your head in disapproval when you’re being overtaken. You’re being overtaken because you’re riding too slow or too weird, and the people overtaking you don’t wish to watch you display non-existent riding skills or witness you ploughing into a tree.

Thirdly, stop over-cooking corners. No, seriously. You L-platers are almost as bad at this as those appalling cruiser-riding greybearded fools who are forever running wide in bends and taking out on-coming vehicles. If you think you’re going too fast into a corner, just lean harder. Do not brake. Braking is what causes the bike to stand up and sail into oncoming traffic. Lean harder. This works. I promise. Unless you’re like 65-plus and on a giant cruiser, in which case you’re doomed and on-coming traffic is doomed – but that’s a whole other column.

Fourthly, stop telling yourself that “everyone crashes on bikes” and therefore you will too. That is a self-fulfilling prophecy and you will make it come true because you believe it. Tell yourself you’re not going to crash and believe it with all your fatuous, self-centred heart.

Fifthly, you know all that fancy riding gear you’ve bought that cost you almost as much as your bike? Yes, well it doesn’t make you a better rider and it will not help you not to fall off. In fact, it will not help you avoid crush injuries or impact injuries – which are the ones that really hurt. Your spleen will explode when you hit that gutter no matter how much CE-approved crap you’ve got on.

Sixthly, stop nodding at people. We are not all brothers of the handlebars, OK? I will not leave you stranded on the side of the road in the middle of the night when you’ve forgotten your kill switch is on. But it’s not because I ride a motorcycle. It’s because I’m a decent human being. Remember that the ratio of dickheads to decent human being is actually quite constant throughout society and does not change according to our mode of transport.

That’ll do you for now. If you have questions, I’ll be right here.