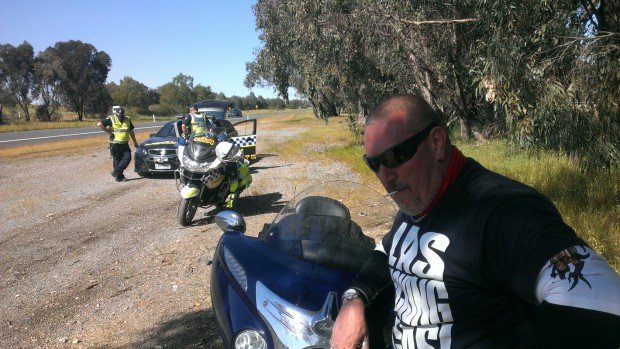 Some of you may recall my travails by the side of the freeway outside of Wodonga as my friend Bly and I wended our way back from the 2014 MotoGP at Phillip Island.

If you wish to refresh your memories, you may read it here.

Just recently, I received a wonderful letter from VicPol, which I reproduce below. 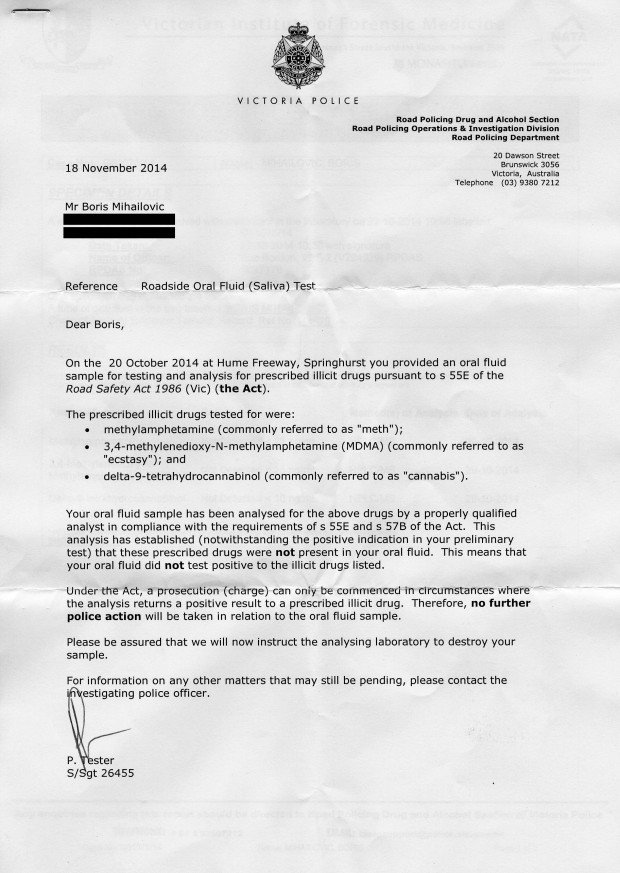 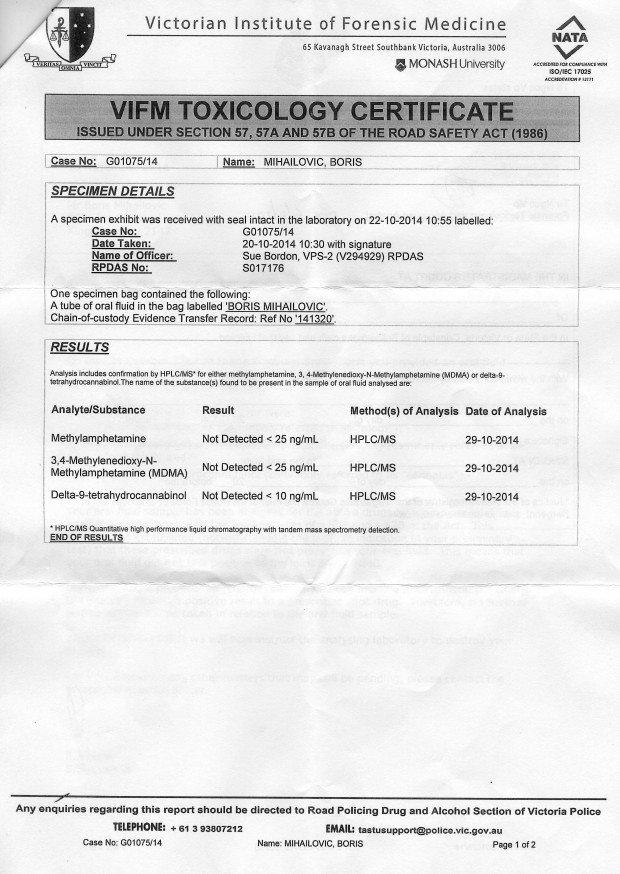 Clearly, I feel I require some additional information, so I have decided to engage with VicPol and specifically S/Sgt P Tester to see if my various concerns regarding this matter, even though it is no longer pending, could be addressed.

So this is the letter I am sending to the Senior Sergeant.

Firstly, I must tell you that I think your name is almost poetically appropriate for the matter at hand, which I understand is listed in your system as GO1075/14.

I have a few questions regarding GO1075/14, and I would take it as a kindness if you could take some time out of your doubtlessly busy day to address them. It’s probably best that you do this now, since I am also sending a copy of this letter to the Victorian Ombudsman, as it is only right and proper that that department be kept informed of such matters, and when it decides it wants to ask you some questions about GO1075/14, you will have the appropriate answers already to hand. You’re welcome.

1. Is it standard practice for road-side saliva samples to be taken without using sterile gloves? I mean, for all I know, the police officer who took them may have been handling all sorts of evidence that morning and may have neglected to wash his hands, which is why the roadside test provided a false positive. I also wish to point out that this was only the first of three roadside tests the officer conducted, since he wasn’t satisfied with the results of the first. So if you could possibly shed some light on the standard procedures, or even send me a copy of the section where it says: “If you do not like the first test, keep doing it until you get a result you do like”, that would be great. 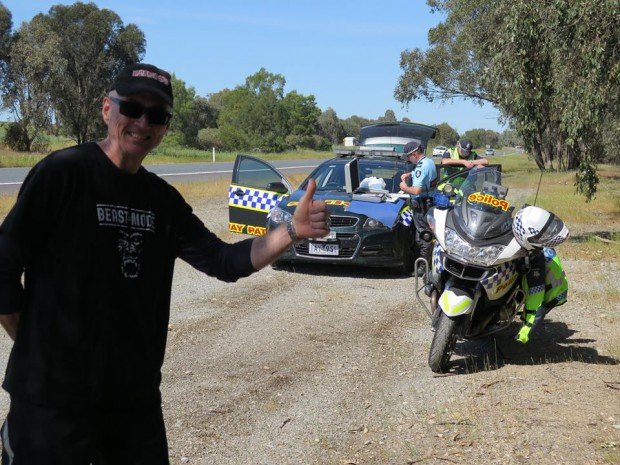 Note his gloveless science experiment in the background.

2. Is it standard practice to bake the saliva samples on the road surface in the sun for a predetermined length of time, and if so, could you please explain the science behind that methodology? And if you would be good enough to send me the section in the guidebook (there is a guidebook, isn’t there?) that deals with the sun-baking-the-samples stuff, that would be great.

3. I understood that the third roadside drug-test, the one that required me to hold a plastic lollipop in my mouth for the best part of 40 minutes, showed a positive reading for cannabis, according to the gloveless police officer conducting it. That being the case, could you be good enough to explain why this sample was also tested for methylamphetamine (which is commonly known as “speed” in Australia, not “meth”, you know. You guys really do have to stop watching US cop shows on TV), and MDMA? One would think that testing my saliva for drugs that were not in my system is a waste of tax-payer money, but I will be guided by your wisdom in this regard. As a guide, I understand that a High Performance Liquid Chromatography Mass Spectrometry test normally runs at around $400 a crack. You tested for three chemicals (two of which, I’d remind you, I did not test positive for on the side of the road), so that’s like $1200. Of course, if VicPol gets some kind of discount for volume, then it’s probably cool. 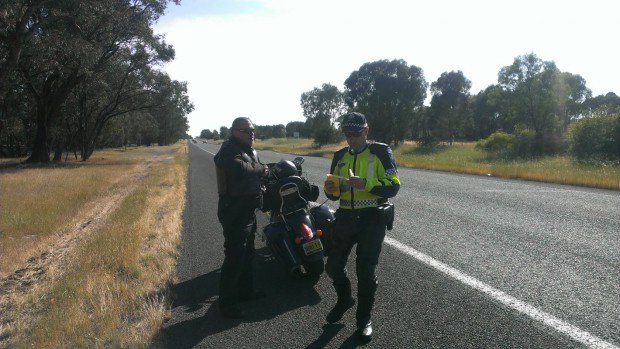 Nope, no gloves here, either.

4. I would also like an explanation as to why I was drug-tested in the first place. The police officer who pulled my friend over for “riding with his feet upon the rear footpegs” (which is apparently illegal in Victoria, but for which he was not booked), and because he did not like the angle of the numberplate on my friend’s bike (for which my friend’s bike was defected, despite the fact that the number-plate angle the police officer did not like is perfectly legal in NSW where the bike is registered), did not pull me over. I stopped because my friend was pulled over, and you know how it is with mates. You’d probably stop if yours were likewise pulled over, huh? So, if you would be good enough to explain why I was also drug-tested, seemingly apropos of nothing, that would be nice.

5. I am confused about this “chain of custody” claim that is made in your correspondence. The only thing I signed was the saliva sample, allegedly mine since I did not witness the officer create it, handed to me on the side of the road, and which I have sitting on my desk at home. Would you be good enough to explain how you understand the term “chain of custody”, because it seems a little at odds with how a judge in a court would view it?

6. My confusion is also evident and arises from your statement that “these prescribed drugs were not present in you oral fluid” (by the way, should that not be “proscribed” drugs, since my doctor would rather eat his own liver than write me a prescription for cannabis, speed or MDMA). If they were not present, as per your statement, why then did my oral sample test positive on the side of the road? Did the baking of the samples in the sun make a difference? Did the fact that a second un-gloved police officer handled the lollipop (which I strove ever so valiantly to fill with my saliva) each time he checked that it was “ready”?

7. Who is Sue Borden, and does her Public Service Grade (VPS-2) qualify her to deal with saliva samples? Is she properly qualified to do so under the NATA guidelines? Why is the name of the police officer who conducted the road-side drug-tests not shown on the correspondence sent to me?

8. I think it is also important for you to explain why my personal details were published in a VicPol media release where my friend and I were publicly defamed as “Dopey Riders” who were leaving Phillip Island after the MotoGP. I realise you may have been jumping the gun a bit referring to me as “dopey” given I had not yet had my oral fluid sample analysed by a NATA-accredited laboratory, but it’s pretty poor form, wouldn’t you say? Unless, of course, the genius who creates your defamatory media releases was engaging in some kind of not-very-clever sophistry where the reader would imagine that I was dumb (dopey) and/or under the influence of dope. So in this case, I think a public apology and retraction would be the first thing you should consider, because that might mitigate what may happen in the future in regards to this defamation. Probably not, but.

If you could address these issues for me, I would be grateful. I will most certainly have other questions, basically to do with the accuracy of your road-side drug-testing kits, the overweening arrogance and contempt of your police officers, and few other salient queries I am currently mulling over with some fearsomely sharp Learned Counsels.

On a positive note, I would like to tell you that the Indian Chieftain I was riding is an excellent touring motorcycle and one which I would recommend highly.