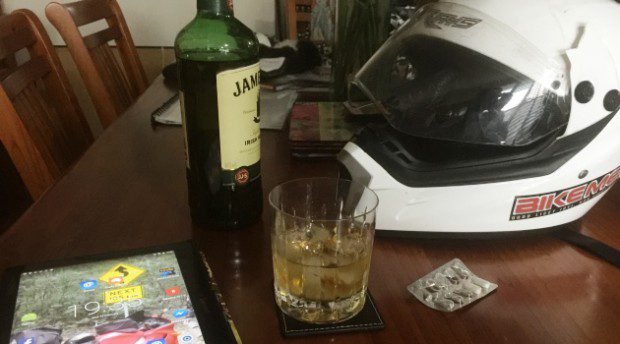 It was very embarrassing.

I put my helmet and gloves on and started up the VFR and headed out of the underground car park. As I turned to the exit ramp I checked my mirrors, and glanced at my instruments, and looked up just in time to cop the bottom of the descending roller door in the face.

I got up off the ground and took my helmet off. Two guys passing asked me if I was okay, and offered to help pick up the bike. It had crashed remarkably well. Only the left pillion passenger footpeg was broken.

I picked up the half footpeg and the remains of my helmet sun visor. The sales manager appeared, took stock of the situation, and told me that conventional wisdom had it that the rubber side pointed downwards and the painted side upwards.

The two passers-by helped me right the bike. The ground had knocked the gear lever up into neutral, so it tried to roll down the ramp again when we got it up. My clutch hand hurt.

I rode home. My clutch hand hurt more. I asked the girl-child to help me bandage it. I had codeine and Irish whisky for dinner. It is superior analgesia.

I went in to the city and bought a new helmet a week later. My clutch hand still hurt. The sales guy looked at the broken bits on my old helmet and looked at the BIKE ME! sticker and asked how Boris was.

I bought the same model adventure helmet. They’d improved it in the past two years.

I’d planned to go for a ride that weekend. Did I mention my clutch hand still hurt?

I revisited an abandoned project. Many of the people I know listen to music while they ride. I explained to one that I’d never felt the desire to listen to music while I ride; and he had made some crack about the man that hath no music in himself, nor is mov’d by the concord of sweet sounds, is fit for treasons, stratagems and spoils.

I knew he was referring to Lorenzo’s speech from Shakespeare’s The Merchant of Venice, and I wondered if he had a point.

I chucked my Bob Dylan collection onto my smartphone, and put the earbuds in my ears, and pulled the helmet on. The earbuds got ripped out by the helmet and ended up under my collar.

Screw this, I thought. I poured myself another Irish whisky. I cracked out the last two codeine.