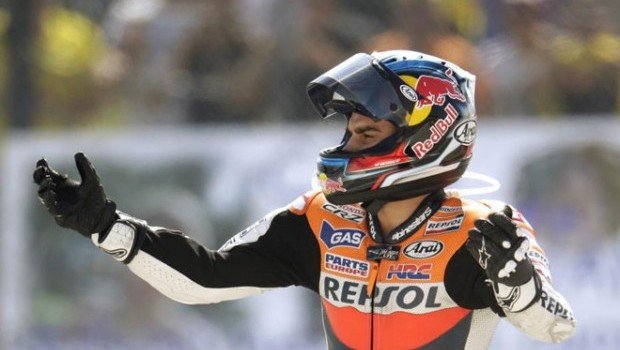 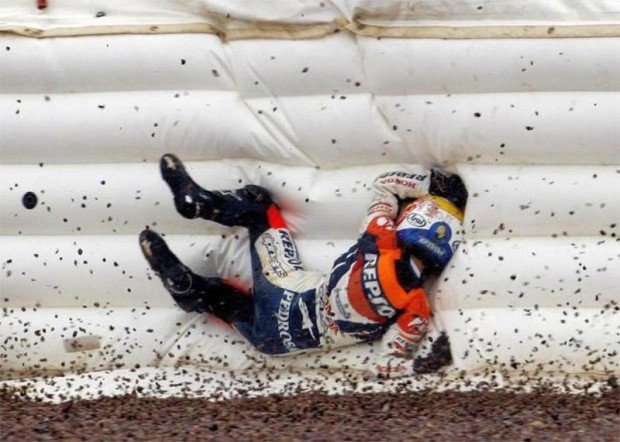 In 60-odd years of the motorcycling world championship, no one has taken more from MotoGP and contributed less than Dani Pedrosa.

In his eighth year in the big game, all on a factory bike, he’s won occasionally, but infrequently, only when the Honda is the quickest bike on the track, and never been a serious championship contender. Worse, he’s been a miserable sportsman since day one. He was generally a prick throughout his career, despite his junior category titles coming with the benefit of superior equipment, backed by a shitload of Spanish sponsorship cash. And the whole time he went out of his way to be an arsehole to other competitors, most notably Casey Stoner in the 250cc championship, when Stoner was challenging him on far inferior machinery and a shoestring budget. 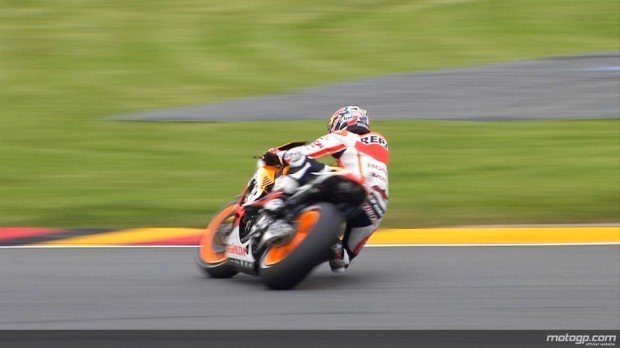 MotoGP is the grail to which all racers aspire, and it’s what inspires the motorcycling purist. It’s the pinnacle of competitions that run the world over in innumerable categories. It is, therefore, more than just a sport. It’s an industry. Riders, teams, manufacturers and to some extent, sponsors are stakeholders in this industry. And the spectator is integral, because without the punter, MotoGP would not exist at all. In this context, Dani Pedrosa is a parasite. He is the Spanish tick that draws lifeblood from the entity that is Motogp, but contributes nothing.

Just as a tick works tirelessly to find a suitable position on it’s host, so too Pedrosa worked hard to get to MotoGP. Being Spanish, he enjoyed support and financial backing not available to many other nationalities, but he had both the ability and work ethic to make it. The point is that in the eight years he’s been there, he hasn’t contributed much beyond riding the bike. As a personality, he’s given nothing to the sport the way the likes of Rossi, Edwards, Hayden, Capirossi, etc have over the same period. Pedrosa’s contribution to MotoGP is all about Pedrosa. And without MotoGP, what would Dani Pedrosa be? A motorcycle courier? An author of children’s books? A midget in an Ewok costume in the next Star Wars movie? 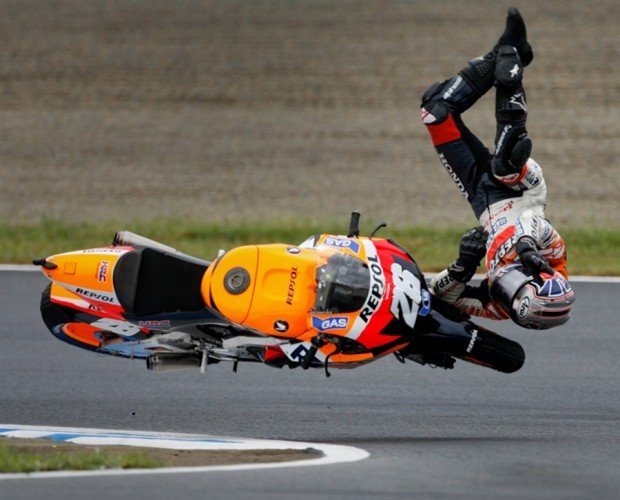 Gifted the best bike on the track when he entered the big league in 2006, he’s spent the last eight seasons looking like a spoilt little bitch. When he wins, he’s arrogant and aloof. When he loses, he’s a whinging fucking sook. He has the personality of an ingrown toenail and has contributed nothing in terms of character or colour to the championship. Even Biaggi brought character to the circus, and he was an arrogant prick too. And what’s the go with his sycophant bumchum Puig following him all over the world to tickle his balls and dry his eyes when he gets beaten. That’s pathetic, he looks like an over-protective tennis parent. Remember that spoilt little kid in primary school who ran to his mother every time he didn’t get his own way? That’s Dani Pedrosa. But instead he has Puig to run to, to defend his feelings. Fair enough, it was tragic to see Puig’s own career cut short by his own crash in 1995, but racing vicariously through Pedrosa isn’t going to deliver the championship he still desires.

All Pedrosa’s victories have been soft. When the pressure’s been applied he’s caved. Can he ride a bike? Oh fuck yeah. He shares a degree of the super-human abilities of those chosen few, and while some of his wins have been impressive, they’ve all been when his bike’s been the best on the day. He hasn’t pushed an inferior bike to the front, and I can’t recall him ever being involved in a decent battle. He either leads from the front, or trails around behind the leaders. He demonstrates frequently that he has an incredible ability to ride a motorbike fast, yet he can’t mix it when it comes to banging fairings. With clear track he’s as fast as anyone in the world, but he lacks the racecraft to compete seriously with fellow aliens Rossi, Lorenzo, Stoner, and now Marquez. 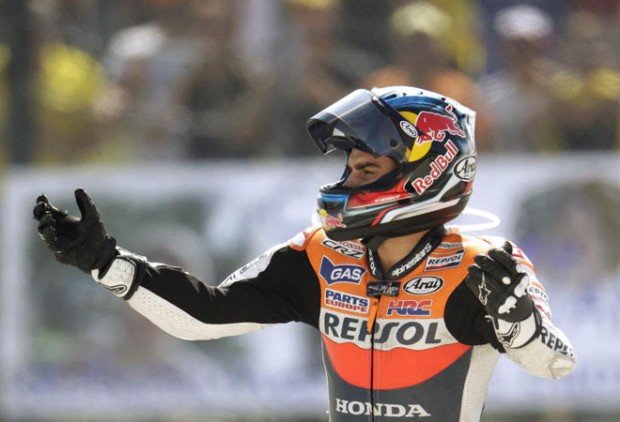 Perhaps he’d have more championship success if he channeled his energy into riding, rather than being a prick. Remember King Carlos of Spain forcing him to shake Lorenzo’s hand on the podium of the Spanish GP? What a disgrace. Royal intervention to force a display of sportsmanship on the world stage? Is that the way for a prospective world champion to behave? Is that how he sees himself as a role-model to aspiring bike racers the world over? Fucking pathetic. He could take a leaf from the book someone like Colin Edwards, who even in the heat of battle, win, lose, crash, or get taken out displays nothing but respect to his fellow competitors, and the motorcycling public who enable him to have that job. He, Rossi, Hayden and their like are great sportsmen, and great men. Pedrosa by that measure is neither.

There’s nothing wrong with a stoush in the course of events. The ferocity of competition at that level demands it. It’s part of the game, like Casey Stoner walking down to the Ducati pit to slag Rossi off for taking him out at turn one, and Rossi taking it with good humour. But sooking is unbecoming a sportsman of that calibre. And it undermines the courage he has to lean off the side of a machine that’s more projectile than motorcycle. To get back on a GP bike so soon after serious injury takes intestinal fortitude the rest of the world can barely imagine. Sulking and dummy-spitting betrays that courage. Perpetually walking around looking like he’s just been force-fed a turd sandwich is not what you expect from someone who’s paid millions to fly around the world and race the world’s most exciting machinery. 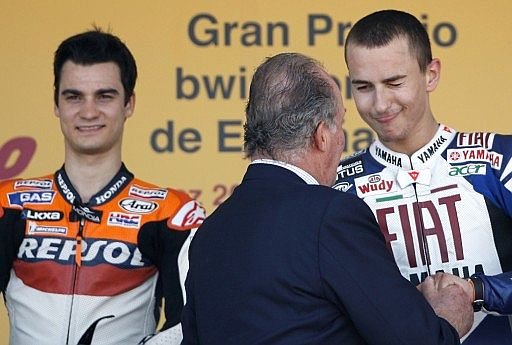 Stoner broke his fragile spirit when he arrived on the scene at Repsol Honda and handed him his arse. Suddenly he couldn’t make excuses about the bike, so he just spent more time sooking in the pits. Now Marc Marquez has arrived and made him look like a complete twat. It took him all of 5 minutes to beat Pedrosa on a bike that was developed around him. Moreover, the Marquez scenario is the Sharknado that terrifies Pedrosa: a teammate who swept into the class with a wave of excitement, is also Spanish, faster than he is, younger, and more popular than himself.

Marquez is the real deal. Pedrosa is a pretender. He’s had a successful career, but he’ll never win the one championship that matters. And despite what Sete Gibernau used to cling to, there’s no such thing as a ‘Vice-champion’. Pedrosa’s handful of fans want to rely on his injuries as an excuse? Oh please. Mick Doohan won five consecutive championships, he obviously never had an injury.

It’s time for Repsol to fuck him off and get someone with some ticker on that bike. Bradl, Bautista or Espargaro would do more with that machinery. As to the question of whether any of those guys would win the championship on the Repsol bike, well, probably not. But they’d add more to the competition and display the true spirit of motorcycle racing, which gives much more to the sport generally.

If I wanted to watch a prima donna sulking in the pits I’d watch F1.
Fuck off Dani Pedrosa. Don’t hit the airfence on your way out.