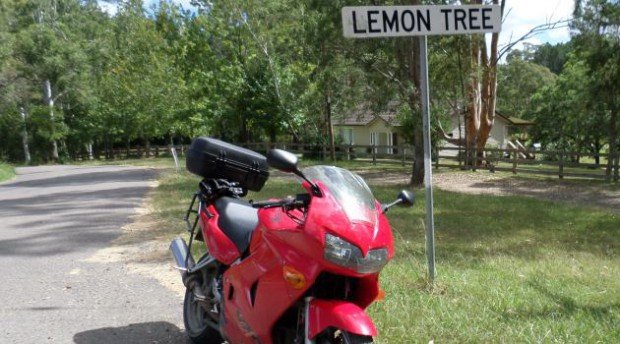 The homos had the Gay and Lesbian Mardi Gras on Saturday, which included a bunch of overweight lesbians riding motorcycles up Oxford Street without helmets on, which is illegal unless, apparently, one is homosexual.

I can only imagine what would happen if I tried to do it. I assume there would be sirens, and batons and tasers if I didn’t submit. And all, apparently, because of my sexual orientation.

I am a victim.

Sunday I went for a ride. I wanted a nice place to ride to, where I could forget about the crushing oppression. None of this Dark Corner and Mount Horrible. I browsed Google Maps.

Lemon Tree sounded nice. It wasn’t all that far away. I typed it into the GPS. It directed me up the motorway and across a bit.

The road turned to dirt. I’d brought the wrong bike. The GPS told me to turn up a road that was steep and had deep ruts, and I turned back. I will return, I thought. Like Douglas MacArthur, except on a bike with knobby tyres.

I took a big loop south and then north, and hit tar again. It was around 1130. I was looking forward to Lemon Tree. I figured there would be a pub. It was too early for a beer, but I could have murdered a gin and tonic.

Lemon Tree is a sign, and a house. There is no pub. I wondered if I should knock on the door of the house and ask them to make me a gin and tonic. I decided against it.

I headed south. I explored side roads. There are some nice roads up there. Signs pointed to Yarramalong. I followed them.

Yarramalong has no pub.

I headed further south. I remembered that Mark told me way back that the Spencer general store sold beer. The GPS said it was only 30km away.

It was a great road. The store sold beer. I bought a Peroni Nastro Azzuro and sat at a table outside and watched the river. Four senior citizens drank coffee at the next table. A dog lay on the ground near me.

A small child ran around the corner of the building, yelled “Puppy!” and patted the dog. The dog sat up and licked the child’s face. I looked on benevolently. The child beamed at me and said “Puppy kissed me!”

A woman with roses tattooed on her arms walked around the corner. I’m not a fan of tattooed women, though I had to admit hers would be good camouflage if she wanted to take a crap in the garden. I hadn’t noticed her doing so, but then I probably wouldn’t, would I?

Probably time to be going, I thought. I drained my Peroni and reached for my helmet.

I walked back to the bike. There was some discussion, possibility clarifying pronunciation, as I put my helmet on. The child pointed at me as I rode past the store. Her mother stared. I shrugged.

Kid had to find out SOME time.