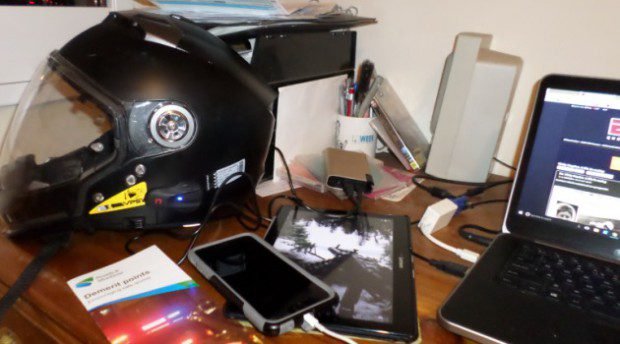 I had lunch with Boris, and he gave me a Nolan N44 helmet.

“This is an important helmet”, he said. “It has all their comms stuff built in. You will love it. Give me a thousand words.”

I downloaded a manual for it. It has a microphone and speakers built in, and a Bluetooth interface. I downloaded the iPhone app, and paired the helmet to my GPS. My GPS started talking to me in a female voice. I’d never heard it do that before. She sounded kind of cute, if a bit passive-aggressive when you didn’t do what she said.

Then the helmet said “Low battery” in my ear, and a normal mini-USB cable wouldn’t fit. Boris told me it didn’t come with a cable, so I went to the motorcycle accessories joint in town and ordered one. They said there was only one in the country and it was in Melbourne, and they would call me when it arrived.

I went in the next weekend to pick it up and they told me they weren’t expecting me because they hadn’t called me and told me to come back when they called.

Three weeks later they called me and said come in and pick up the cable, so I rode in and they gave me the wrong one.

I went home and found one on eBay in England and ordered it. I rode around in the helmet for a week. It’s black, which I don’t like because it absorbs heat, but it was winter so I didn’t mind. The visor closes with a satisfying clunk like closing the door on a luxury car. It has little winglets on the front to stop it lifting, like a MotoGP Ducati. It has a retractable tinted sunshade. It’s quieter than my other helmets. You can press a couple of buttons and the chinpiece comes off and makes it an open-face helmet, but the microphone is still there. I liked it. It felt like a quality piece of kit.

The cable arrived from England, and I charged my helmet. I paired it with my iPhone, and put my iPhone in the Rammount thing and rode down to the motorway. I merged into the traffic and then I pressed the button twice to activate Siri, and said “Call Ben’s mobile.”

The phone said it couldn’t do that because it was locked. I tried to put in the unlock code, but it doesn’t recognize your fingers if you’re wearing gloves.

I stopped and took off my gloves and put in the unlock code, then I merged back in to the traffic, and pushed the button twice and said “Call Ben’s mobile.”

It went to voicemail. I left a message that I was testing a phone and told him to call me back.

I wore it to work the next day. It paired with my iPhone automatically. No-one called me.

I left work and was riding home when the phone rang. I pressed the button on the side of the helmet and said “Hi Ben”. It wasn’t Ben.

It was an American guy from the Phoenix Arizona office of GoDaddy support. He said they had been working on the problem I reported earlier with one of their DNS servers and they had fixed it. I said I couldn’t test the fix right now because I was riding a motorcycle.

“Wow”, he said. “As if Australia wasn’t dangerous enough.”

“Isn’t the place full of deadly spiders and snakes?” he said.

“Oh that”, I said. “Yeah. You generally only see five or six of them on the way to work though. It would be tolerable if you could carry a pistol, but it’s illegal.”

“Type it into Google,” I told him.

“Yep”, I said. “And the first thing they did after that was take our guns off us.”

“That’s just wrong”, he said. “Anyhow, you test the DNS when you get home and I think you’ll find it’s working.”

“Not really”, I said. “He told me he went home yesterday and his wife was acting strange, and wouldn’t meet his eye, and then he noticed a large feather sticking out from under the couch.”

“Low battery,” the helmet said in my ear.