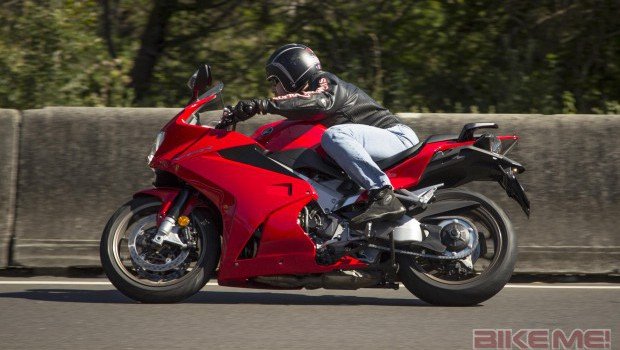 Confession: I once owned a fifth generation Honda VFR800 – the 1998 model. I put many miles on it. Then, some time later, I bought another one. As many VFR riders do. I bought a 2001 model the second time. It was the same, except they gave it an automatic choke. I still have it.

VFR800s generate an amazing amount of affection. I’m not sure why. Unless all those owners are like me, in which case I know exactly why.

The VFR800 has an engine rich in character. I can do a 900km day on a VFR800 and still walk afterwards, and I probably only have to stop twice for petrol. If I go for a ride with a sportsbike guy I probably won’t disgrace myself when the going gets fast. If I stop for petrol in Bumfuck Nowhere and there’s only 91 octane, that’s okay. And if I want to chuck luggage and a passenger on it and tour it’s pretty good at doing that too.

My ’01 came with soft slushy suspension. I bought stiffer fork springs and Racetech Gold Valves and CBR600F3 adjustable dampers and a shock from a CBR929 Fireblade, and they made it pretty good.

My ’01 came with no luggage carrying capacity. I bought a Ventura rack.

The 2014 model doesn’t require this. It has genuine Honda pannier mounts built in. 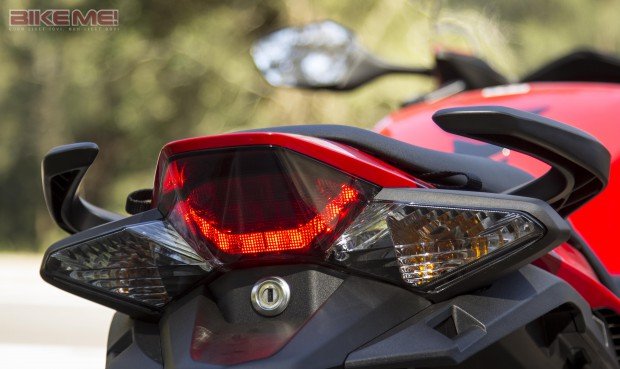 My ’01 was probably one of the most refined sports touring motorcycles in the world in its day.

A word on VTEC. Variable Valve Timing and Lift Electronic Control. I would have called it VVTLEC, but what do I know? ’98 to ‘01 the VFR had gear driven overhead cams. They made a nice whistle. In ’02 they went back to chain drive cams and included VTEC, which makes the engine run on two valves per cylinder until you get on it, at which point the other two valves start feeding it.

The new VFR is handsome. There are few graphics and badges. The fairing is a rich pool of red into which one could probably dive if VFR owners did that kind of thing. Quality of finish is, in a word, Honda. 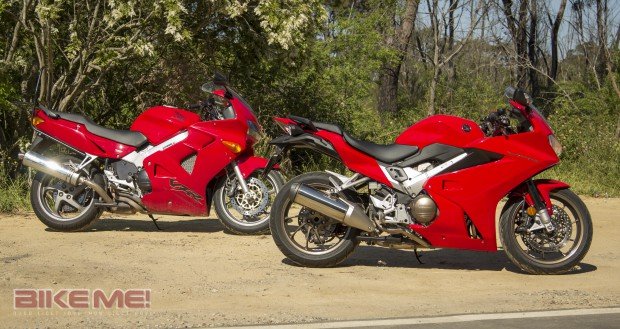 The forks are 43mm, as they have been since 2002. They used to have preload adjustment. Now they have that and rebound damping adjustment. They are not upside down, but they have radially mounted disk calipers, and are very good.

Honda have eschewed the Dual Combined Braking System of previous VFR800s. Some people hated it. Some loved it. I didn’t care, but thought it worked really well. Honda in their wisdom replaced it with very good, but very standard brakes: four piston Tokico calipers, radially mounted, and 310mm discs at the front; two piston Tokicos at the rear with a 265mm disc. 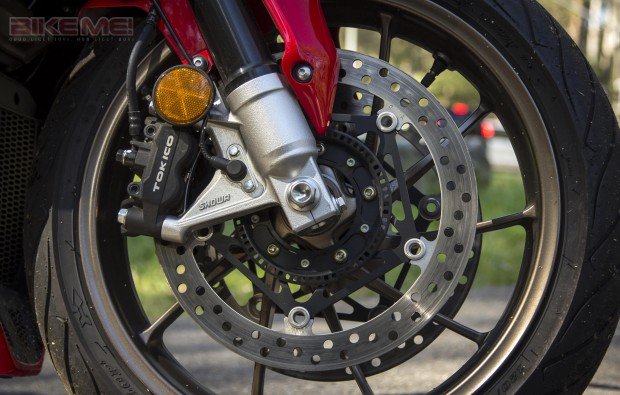 It has ABS as well. I performed an emergency stop for the first time in years while riding the 2014 model and it cut in. The rear locked, the pedal kicked back, the bike recovered, and stopped. This is what ABS is like in 2014. I remember performing an emergency stop on a 2001 BMW K1200RS in the day. The rear brake locked, the six(?) links in the Paralever suspension took up their slack, the rear brake released, the links in the Paralever suspension lost their slack, the rear went bang bang bang, the tyre went chirp chirp chirp, and it was an altogether less satisfying experience than it was on the VFR800.

There’s nothing wrong with the engine. It feels a bit stronger in the mid range than the Gen 5. A bit south of 7000rpm, the induction system starts to roar, the exhaust gets that fabulous V4 howl, and things start to happen. This is VTEC.

Traditionalists and conservatives complain about VTEC. I don’t. I think I understand why they did it. First, to show off. Honda likes to do that. Second, emission control: lots of swirl and complete burning running on two valves per, with the bonus of better midrange torque. Third, fuel consumption. My Gen 5 will sip 22 or 23 kilometres a litre if you baby it on a gentle run. The dash computer told me the 2014 model was sipping 26-27 kilometres a litre in the 80 km/h zones. It saves a few bucks, I guess. Most importantly, it means that if you can be that gentle for that long, you can get over five hundred kilometres out of a tank of juice.

Instrumentation has been upgraded too. The backlit LCD display can be read when it’s too glary to see the warning lights. It has average speed and fuel consumption readouts as well as the usual stuff. It also has a feature whereby you can enter a mileage number, and it will count down as you ride. A waste of time. A kilometres to empty readout would have been more useful. 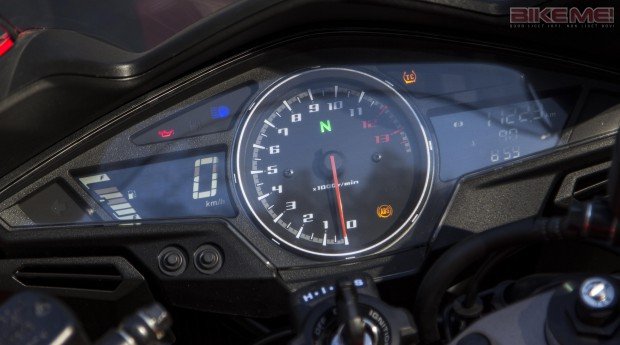 It has self cancelling turn signals. All bikes should, but few do. Honda’s is superb. It monitors the difference in wheel speeds for low speed stuff. It obviously monitors other stuff as well (throttle position? speed?) because it knows when you’ve signalled to change lanes on the freeway or to overtake, and it cuts out at the right time pretty much always. 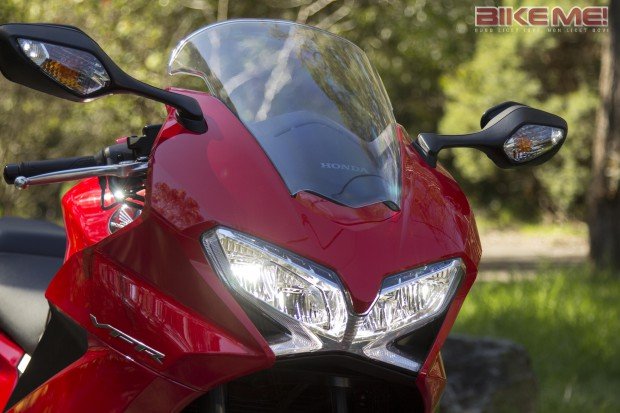 LED lights. So white. Heated grips. So warm. Honda paint. So red. You can get it in black or white, too.

All the geometry numbers remain unchanged, but it handles and steers better than its predecessors. The more rigid swingarm probably helps here, as does the stiffer suspension and nine kilograms less weight. It’s a pleasure to ride fast on a winding road.

The weight loss has come from the exhaust (five kilos), the subframe, the swingarm, the hollow 10 spoke wheels, and even little things like the levers, which have cutaways in the bit facing the grips to save precious grams. 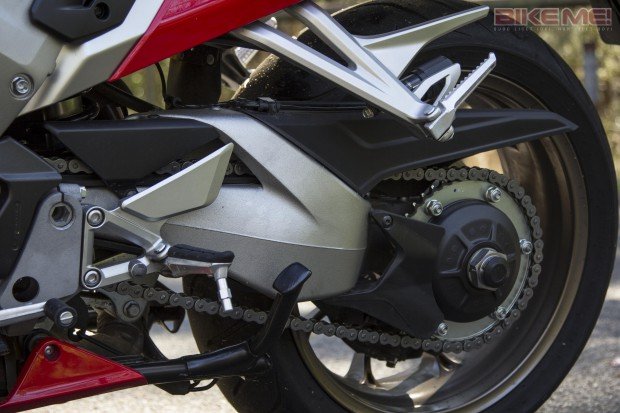 Single sided swingarm is lighter despite upper brace, ten spoke wheels are hollow and lighter too.

It’s skinnier than its forebears, too. The side mounted radiators are now mounted in front of the engine, and the mass centralization is probably responsible for some of the handling improvement noted. 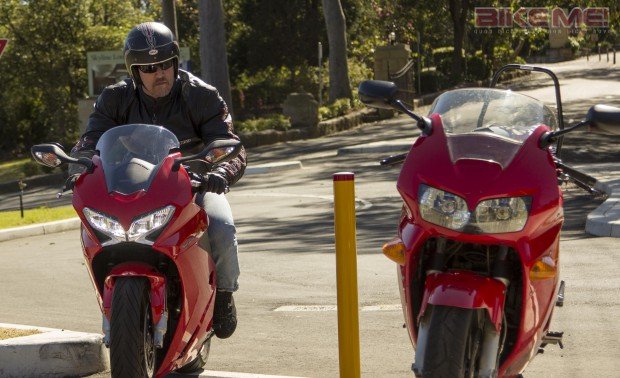 2014 model is slimmer due to twin radiators now mounted in front of rather than beside engine, makes Boris’s arse look big.

It oozes refinement, from the lustrous finish and perfectly fitting panels to the little loops that fold out from under the pillion seat so you can attach ocky straps or a seat bag.

And refinement is the VFR story. The base is a twenty five year old design that they pretty well got right the first time. It’s deceptively fast in that relaxed BMW style.  It’s competent, well balanced, reliable as a rock bridge, well finished and fun to ride in a wide range of scenarios, and gets more refined with each model release. It’s a touring rider’s sportbike, and a sporting rider’s tourer, and some think it’s even nice to look at.