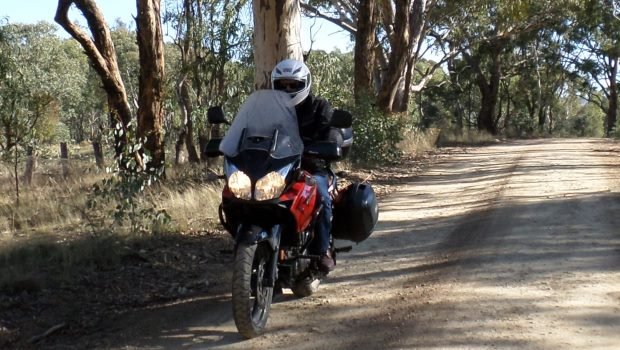 The third day after I got my licence back I bought a wee-strom so I didn’t have to take tubes out of tyres if I got a puncture while touring dirt roads. They are a good thing. I took the girl-child to Ben’s for a couple of days, and found they are a good thing two-up with luggage, as well.

We arrived at lunch time, and had tasty scotch fillets and chips fried in animal fat. We went fishing, and threw sticks for the dogs. The next day we went to the Gold and Fleece at Windeyer for lunch. The girl-child and I went on the bike. It’s a good ride from Aaron’s Pass Road up to Windeyer. The last bit is just magic.

I said I would buy everyone lunch, so I took orders to the counter. The publican wrote them down, and took my money, and asked me my name.

“So we can call it out when your food is ready”, he told me.

We went back to the house after lunch and found a wasp nest, and smashed it with a rock, and got paralysed spiders and wasp larvae out of it and fed them to the chickens. Then I told Ben that I was concerned that sailors would start bothering me for sex, so he helped me take the orange pin striping off the wee-strom’s rims. I was pleased to find that the previous owner had installed stone guards on both radiators, and an air horn.

Meanwhile, the girl-child played with the dogs. She likes dogs, and I figure they will teach her loyalty and obedience and how to turn around three times before lying down, unlike her pet snake Monty, who has taught her nothing but how to sleep all day and hiss at people who bother her.

The chickens were still alive the next day, and had laid some delicious eggs, so we ate them on toast. We left at nine, and I went slowly at first because I expected kangaroos on the dirt road, but we didn’t see any live ones. A rabbit ran across in front of us once, and we saw a wedge-tailed eagle and a couple of wild goats up close on the Turondale road.

The Bells Line of Road was clear of traffic, and we rode it at medium-fast cruise.

We went out to dinner that night and the girl-child told her mother about the weekend. She said she had seen an emu on the south side of the Great Western Highway between Lithgow and Bathurst, and you don’t see THAT every day. “It looked at us like this”, she said, and made a face like an emu. She is a talented child.

I told her mother about smashing the wasps nest and feeding the babies and their snacks to the chickens. She asked why we did that.

“It seemed like a good idea at the time”, I offered. “Plus, when she goes back to school after the holidays and everyone is talking about what they did during the break, I bet no-one else will tell THAT story.”

“Your father’s special, you know”, she told the girl-child.

I thought I detected a hint of sarcasm, but the music was quite loud.

I was probably mistaken.