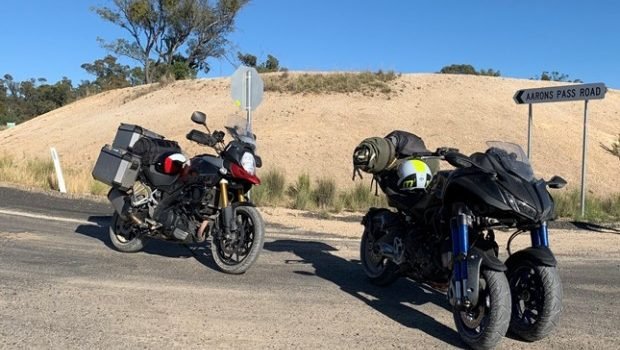 I rode up to visit Ben again a few days before Christmas. I told him about riding the Yamaha Niken a few weeks before Christmas when I visited Boris. He didn’t know what I was talking about so I searched up some images on my smartphone.

“Wow”, he said. “You should tell him to bring it here so I can check it out. I haven’t seen him since that time we went hunting at Grattai fifteen years ago. Tell him I have something to say to him in Serbian. And tell him he should stay the night and I will make him graff for dinner.”

“We should do an overnight run and stay at Ben’s place” I said to Boris a few days later. “He’s at the end of the Bylong Valley Way. It will be a great ride. Lots of corners, some dirt. Ben says he wants to say something to you in Serbian and make you graff for dinner.”

“Never heard of it”, said Boris.

I rode up to Singleton a week or so later. I went by the Putty Road because it is a hundred and fifty kilometres of mountains. Boris met me at the United service station on the Niken. It’s an attention-grabbing bike. People were stopping to look at it on their way to the cashier.

We rode the Bylong Valley Way shortly after. It’s a great ride: tight turns as you enter and leave the valley and fast sweepers along the valley floor. The Niken’s great at braking hard into tight turns but the V-Strom probably comes out of them slightly harder. If the surface is less than perfect the Niken carries more corner speed.

We stopped at Rylstone for beer and lunch. People were stopping in the street to stare at the Niken.

We detoured via Ilford and Sofala for more winding road, did the last twenty kilometres on the dirt, and arrived at Ben’s mid afternoon.

Graham from across the road had come over to see the Niken. He and Ben checked it out at length.

It was a hot day. We sat in the shade and drank cold beer. “I believe you had something to say to me?” said Boris.

“I caught the last two words,” I said. “What was the first part?”

“’The cats of Australia have made their choice’”, said Boris.

It remained hot. The beer supply was up to it. We found Graham and Boris had mutual friends. We had graff for dinner. It’s a bean and sausage stew. It’s pretty tasty.

We drank more beer and told stories, stopping only to take a gun and a spotlight to find out what was upsetting the dogs. The dogs stopped being upset two shots later.

We left at 0730 the next morning. We took the Aarons Pass road to the Castlereagh Highway. It was about thirty clicks of dirt. The ‘Strom and the Niken are both comfortable to ride while standing on the footpegs. I expected ‘roos and feral sheep, but the only wildlife on the road was a solitary rabbit.

It started to get hot again, so we raced back on the Bylong Valley Way, stopping only for hydration. We turned off the highway towards Boris’s place a couple of hours later. A guy walking along the footpath did a double-take at the Niken and nearly fell over.

I left Boris’s place a half hour later. I’d chased the Niken for just under six hundred clicks. Over fifty of them were dirt.

It was about 230 kilometres to home. I rode the Putty Road south alone. It was just as good as it was the previous day. Two hours later I was out of the mountains and suburbia was starting. I would be home in half an hour. I stopped at a service station for a drink. The ambient temperature gauge read 43.

It was air conditioned inside. I loitered while I drank cold water. The cashier asked me where I was from. “Sydney”, I said. “What about you?”