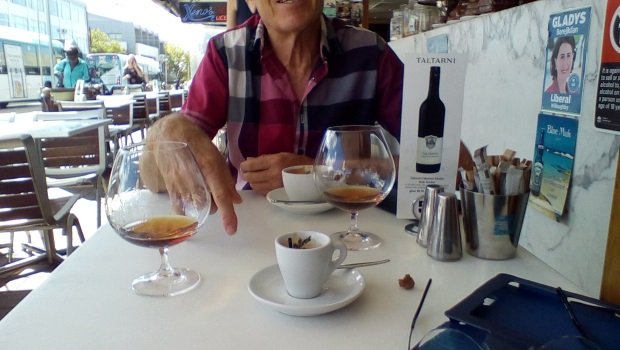 “Schleiermacher said” I told Oleh on the ‘phone, “that every language is its own mode of expression that can’t be directly translated into any other language.”

“But Schleiermacher wrote in German”, I told him, “So what I just said is a translation of a statement that no statement can be translated.”

He agreed that we should sort this out over breakfast, so I took him to the Greek joint. We ordered coffee, and I told the waiter to bring two Metaxas. “Two what?” he asked.

“I cannot believe that a Greek doesn’t know Metaxa,” I said.

The guy behind the bar wasn’t, though, and he had heard me, and he was warming the glasses.

I told Oleh that I was reading David Hume’s Enquiry Concerning the Principles of Morals, and that the arguments put by Hume appeared to be sound common sense and well thought out. Oleh agreed with me, which is unlike him. I told him that I liked pommy philosophers, and Scots as well, especially John Stuart Mill and Adam Smith. I told him that I thought that the poms and Scots seemed to be genuinely attempting to make sense of existence, unlike the French, who were generally just being smart-arses. I told him that if Descarte had told me he thought, therefore he is, I would have liked to smash him in the face with a brick and then deny having done it because the brick didn’t exist because bricks don’t think. Then I told him that that idiot Derrida was a typical French philosopher because he seemed to think that we could waste our whole life deciding that dictionary definitions of words weren’t good enough and carrying on like cocks about it, and don’t get me started on the Germans, especially Marx, and that Das Kapital was a frightful load of horsecock.

As you might have noticed, the Metaxa was kicking in.

Oleh agreed again, which is unlike him, and told me he had doubts about the Dutch, too. While he was not familiar with their philosophers, he told me; their treats were not, their courage was worthless, and their ovens made the food taste like shit.

I told Oleh I was going to il maestro’s for a haircut. Oleh said he would stay and read the paper and eat eggs, and see me in half an hour or so. I paid the bill and told the waiter the Metaxa was good. “Five star?” I asked.

Il maestro cut my hair in silence, like a man. He broke it towards the end to ask if I wanted anything on it. I said no. I put my glasses back on, and looked at myself in the mirror, and turned to il maestro because I was going to say “It’s too short. Put some back on.” I wanted to see his reaction. I expected him to raise an eyebrow, possibly by as much as three millimetres.

I said “It’s” and he collapsed backwards on the floor, bashing his head on the footrest of the barber chair next to me on the way down. I got down and checked him for a pulse. He had one. I could hear him breathing. I told the guy in the chair next to me to call triple zero, and he said he was on to it.

Il maestro opened his eyes after a while and started to moan. The guy talking to triple zero asked if anyone knew how old il maestro was, and someone said eighty. Il maestro looked at me and said “I blacked out”.

I told him there was an ambulance coming. He nodded. I asked him if he wanted to sit up, and he said he might just lie on the floor for a while.

I gave one of the barbers twenty bucks for the haircut and told him he was in charge, and went back to the Greek’s. Oleh was finishing his eggs. I ordered another Metaxa, and told him I tried to freak the barber out, but he got me first.

Oleh told me his bike was in the shop because he parks it out the front of his house and people keep knocking it over with their cars. He said it was going really well otherwise, and he thanked me for telling him after I rode it that it needed fork bushes and steering head bearings.

I told him he was a lucky bastard, and that I hadn’t ridden a road bike in the sixty six days since the Organs of the State had suspended my rider’s licence.

I walked home from the Greek’s and told my wife about my morning. She asked if I was really drinking hard liquor at ten o’clock in the morning. I told her that in all fairness, it was closer to ten thirty.

Saturdays without one are too weird for me.