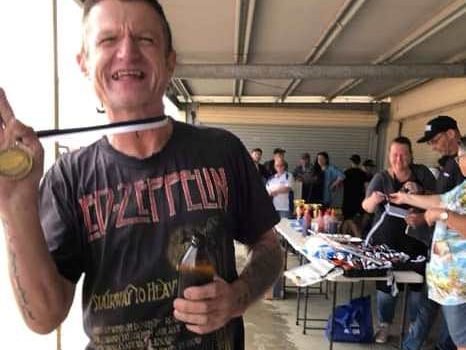 There was fever in the bunkhouse last night.

I read each one with sincere happiness and not a little awe.

It made my night. For it’s not often you get to share in a man’s genuine pleasure, joy, and pride.

Regular readers will remember my mate, Sean Rainford. I did something a while back which opened a few eyes. I got a bona fide one percenter to review a new motorcycle. The Triumph Bobber. That one percenter was Sean. 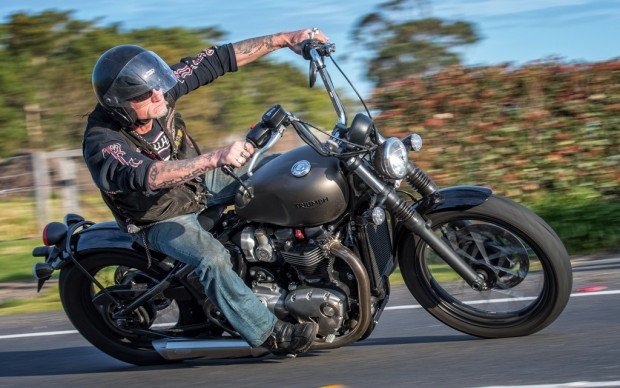 A world-first for Sean and me.

You can read about that HERE.

We had a great day. And I got to ride one of the best-handling Harley-Davidsons I have ever ridden when I gave Sean the Trumpy and he gave me his monster.

Now all bullshit aside, Sean is a legitimately fast road-rider. Most outlaws are. Or they used to be. But Sean is unique. He burns with an inner fire. He holds a passion for and a delight in riding you don’t see that often. And his riding is hard and his riding is lots. 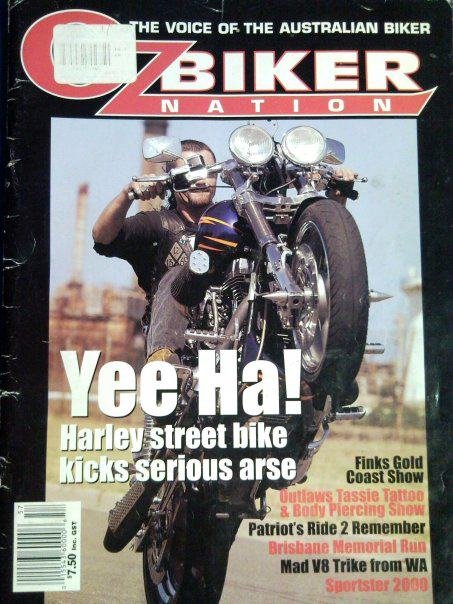 He made the cover of Ozbike back in the day.

If you’ve been shamed on the crazy Macquarie Pass by a bloke on a thundering Harley with more ground clearance than one would think is possible, that would have been Sean.

If you’ve been shamed a small, prehistoric Yamaha two-stroke, cobbled together in a shed with eBay parts and wicked knowledge, then that would have been Sean too.

The bloke can bang – no argument.

“I’m gonna go racing,” Sean told me one night.
“You’re 52. Great idea,” I said, remembering what happened when I decided to take up bike racing in my late forties. 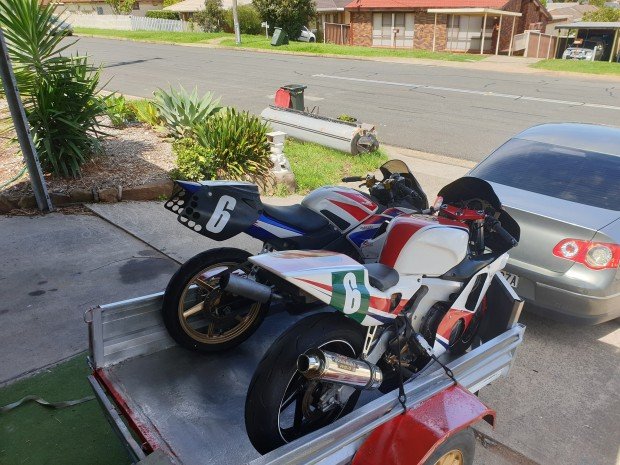 On the way to Wakefield Park. And glory.

Sean thought it was a great idea too. Age is a number. Passion and commitment are everything. He had never raced anything on a racetrack, but having seen him on a public road and knowing his innate skill and steel determination, I had a feeling he would not shame himself.

He then bought a 125, belted it with various tools, got it running, and went racing.

I spoke to him after the race.

He was over the moon. He did not shame himself and finished somewhere mid-field.

“That was so much fun!” he told me. “I’m gonna talk some blokes from the club into giving it a crack.”

My heart sang. Outlaws racing motorcycles is exactly what the sport needs.

The next week Sean bought a 1990 Honda CBR250RR for not a lot of money, because Sean does not have a lot of money. He belted that with tools too, and painted it in his garage. 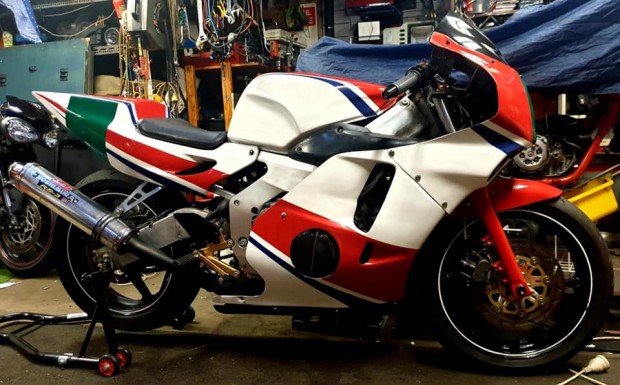 Not bad for a few cans of paint on a matte white surface.

Then he booked a romantic Valentine’s Day weekend for himself and his missus, Gloria, at the Wakefield Park racetrack.

Sean had the fever. And he had it bad. He sent me an SMS.

“I’m racing at Wakefield Park next weekend if you’re not busy. I’m racing the 125 and the 250. Three lots of qualifying and nine races. I think I’ve written cheques my unfit body ain’t gonna handle! Spending Friday in a room at the track with the missus cos I’m romantic. Although she’s still cranky cos I didn’t tell her I was buying the 250 either.” 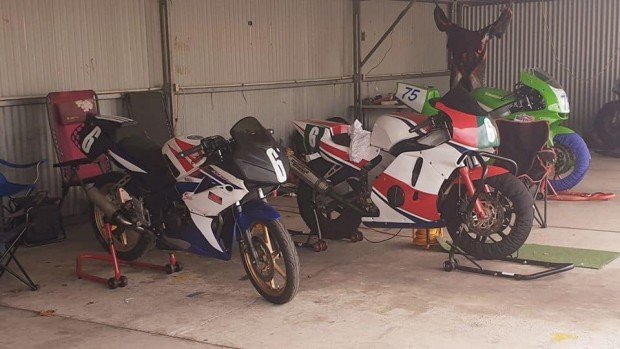 Sean’s racing stable. Not the green thing. That is someone else’s.

“Good for you,” I replied. “I’ll make an effort to witness your glory.”

“My glory will be not coming last!” he replied.

“It was matte white when I got it so I got the spray cans out,” he said.

“Problem is the prettier I made it, the less I wanted to crash it and the slower I will go, thus defeating the whole racing thing. The wheel bearings were fucked and I rebuilt the front and back shocks…I’ve never done a back shock before so it could be fucked.” 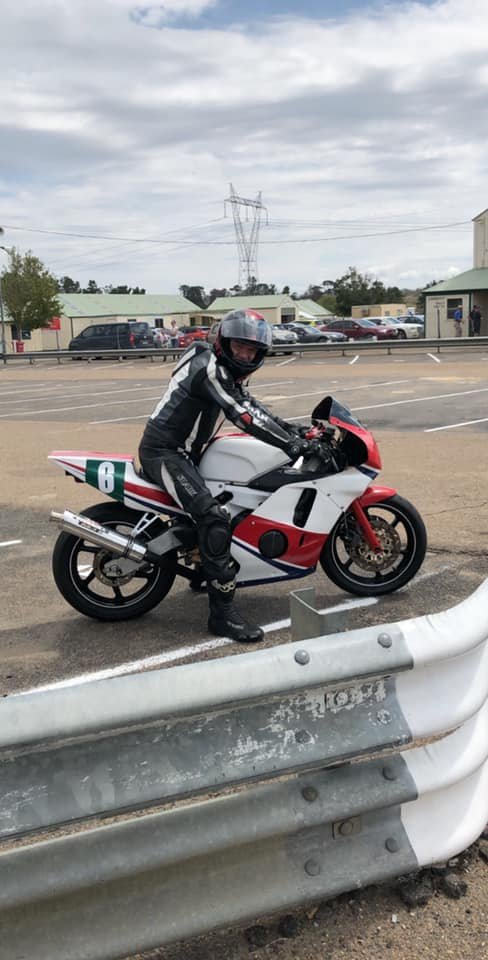 “What’s the lap record then?”

“That will change the second some bastard passes you,” I typed.

“Did you know the 250GP Production Class I’m entering is the biggest class in Australia now?” Sean asked.

“As I said, anything other than last I will consider a win!”

I sadly couldn’t make it to Wakefield to see him race, but on Saturday, I got another SMS.

Hot damn, I thought. The bastard is on fire.

A few hours later, Sean sent me a picture and then fired off text after text. What he’d just managed to accomplish was nothing short of miraculous. Remember, this is the second time the bloke has ever raced, and the first time he’s even ridden the 250. 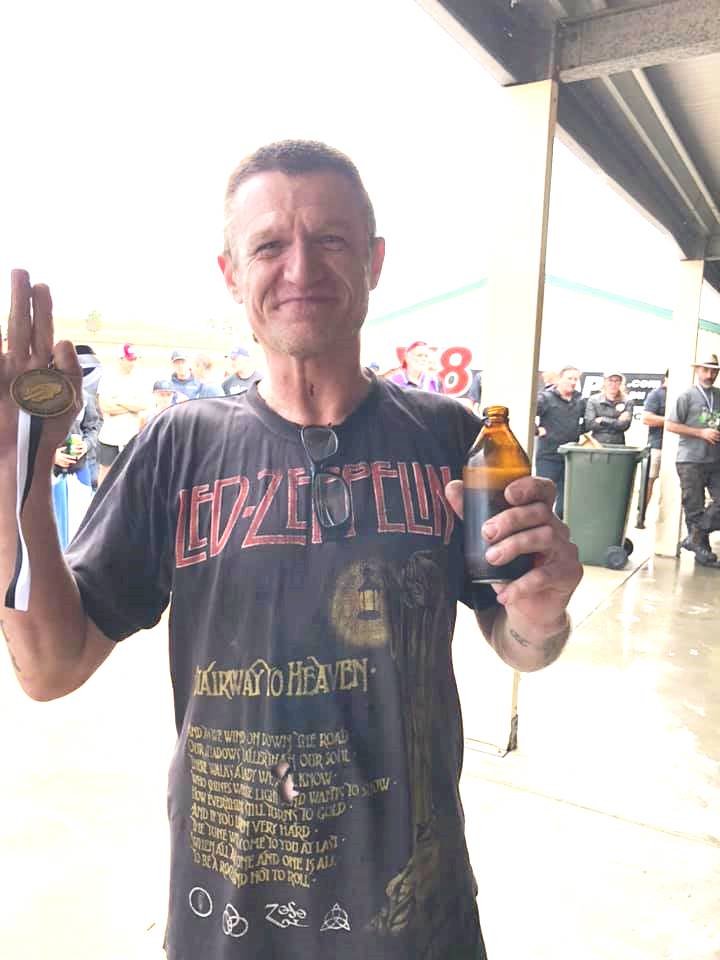 The winning medal and cold beer. This is the stuff of life.

“Bravo!” I typed, grinning like an idiot. I was so genuinely happy for him. “I reckon you’ve got a handle on this racing business.”

“My front brakes were sticking on blue pads! Need that fixed. I borrowed tyre warmers. Probably saved me crashing. I now may be in a better position to get sponsors for my new-found addiction. I feel like that person who won the pokies the first time he played them then was hooked! Today was like a dream I’ve had 1000 times!”

“I’m gonna write an article about you,” I told him. I found his joy and enthusiasm so infectious and figured it was worth sharing.

“No worries, mate,” he replied. “We’re both passionate bikers and it’s a good story. As I’ve always said, I became a clubbie because I’m a bike nut and this kinda proves it. Pigs have fucked up part of being a clubbie for me, but they will never spoil being a biker for me.”

“You are an inspiration,” I told him and meant it.

He laughed, then he typed: “I only managed to pay half the asking price for the bike and the bloke turned up today for the other $500, but accepted $300 because he understood I really wanted to do the Festival of Speed in Sydney. I increased the preload on the back shock by jamming 8mm nuts in-between the top collar and the spring. I stripped the rear shock myself and spilled out the oil when I tripped, so I had to guess how much to put in, ha ha ha! I guess I got lucky. I’m also selling my kids to feed my new addiction.”

“Good thing you have more daughters than sons,” I told him. “Girls fetch a higher price.”

“I’m not silly,” he replied. “Depending on who you talk to, of course. I was fucked though. I seriously need to get fit before Eastern creek…in three days’ time.”

I suggested he go to the gym straight after dinner, but then his wife, Gloria, posted an image of Sean on her profile with this text:

“So I just look over as Sean is talking me about bla bla bla something about brakes and it’s 940 pm and he’s still got that medal around his neck. I’m starting to take bets that when wake up next to him in the morning and he’s still asleep he’s still got it on and still has a big grin on his face.You enjoy your win, monkey man.” 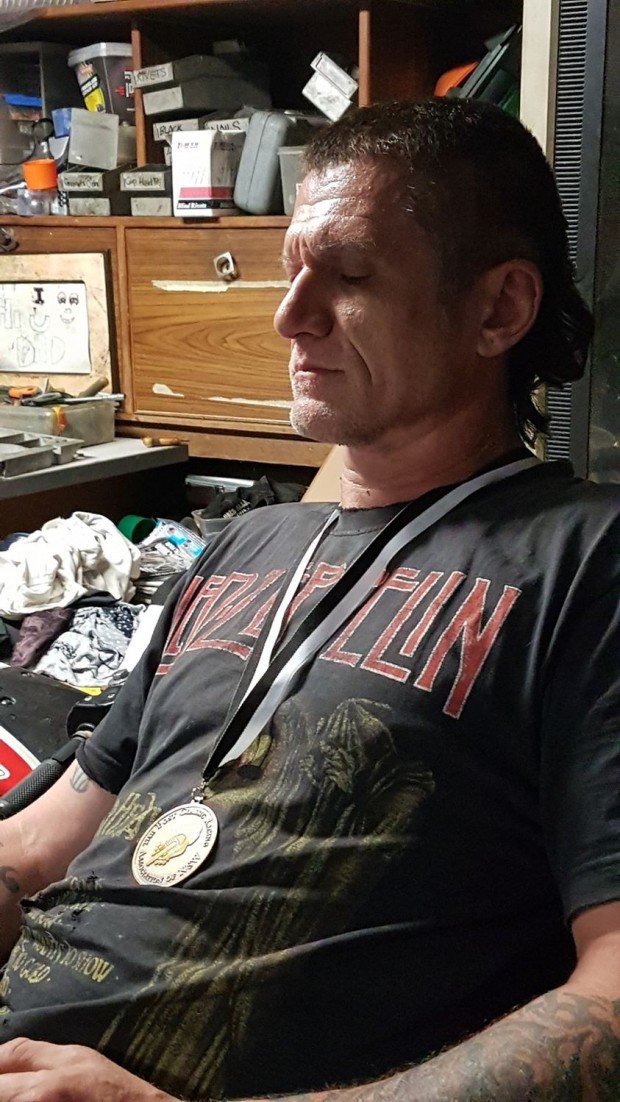 This is the sleep of the righteous and victorious.

And yes, I will be at Sydney Motorsport Park to see Sean race again. How could I not be?

Congratulations, mate. You have every right to be screaming this win from the rooftops. It is an astonishing achievement.