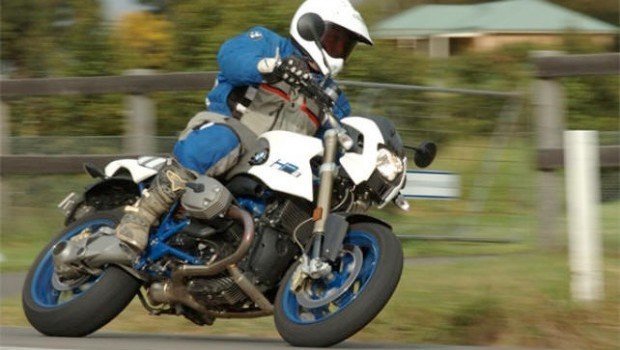 The HP2 Megamoto is what happens when the Germans decide to address the concept of “fun”.

The Germans, of course, aren’t generally seen as a fun-loving bunch of guys.

Technologically superlative when it comes to motoring? Without a doubt.

In that regard, they are probably the most advanced race on earth.

And as a result, the HP2 Megamoto is a magical creation. It’s like the bloody elves built it. 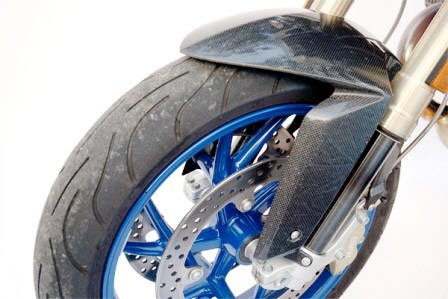 No Telelever malarkey: forks are traditional and top end.

It can take any corner at any speed.

It can do it in any gear, on any surface, wet or dry.

Hell, the long-legged swine could be ridden up the face of a cliff, if you were so inclined.

I’m convinced of it.

But before I was convinced by it, I had to convince myself that I was not going to die each time I leant this tall streak of German joy into a corner – only because the angles of lean this thing is capable of are frightening.

But it is rock solid. Any line you choose – good, bad or indifferent – is perfectly fine with it. Hell, if you wanna change lines mid corner, that’s fine too. Just do it. The HP2 will display no displeasure at your inability to make up your mind. It will just… well… take the bloody corner and be done with it. 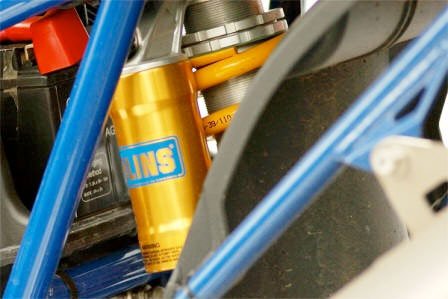 “Glorious suspension”… by Ohlins at the rear

And do not let anyone tell you BMW doesn’t know anything about telescopic forks. The fact it chooses to run tele-levers and that other exotic parallelogram things is more of a concession to the limited riding abilities of some of its customers than anything else. So when the happy Bavarians decide they’ll be building a bike for GP racers to enjoy on their days off, they have no issue gluing on a top-end traditional fork set-up on the most powerful Boxer ever built.

There is nothing but that glorious motor, wedged inside a glorious frame, suspended between glorious suspension, and all painted in BMW’s gloriously iconic blue-and-white paint scheme.

The level of finish is superb, even by BMW standards. The HP2 with its white-faced analogue instruments, surprisingly comfortable enduro-style seat and standard Akrapovic titanium exhaust system (which is rather quiet, but still manages to bang out a bit of boogie on over-run), and smatterings of carbon-fibre is an ecstatic spaffing of sheer minimalism and function. The Akrapovic exhaust: quiet, but some boogie on over-run

And I could go on and on about its technical simplicity and sophistication, but all you need to do is look at the tech box to understand why this thing works as well as it does.

That Boxer motor has been tweaked and poked and massaged and quite possibly threatened – but the end result is a torque-rich, easy revving, hugely willing and immensely capable donk, that seems perfectly suited for what the HP2 likes to do. And that is to go fast, everywhere, all the time. Just dial in the speed you’re happy with and the HP2 will ensure you can do that speed all the time – through every corner, regardless of what the speed advisory sign says.

This is what makes it such a staggeringly fast point-to-point bike. Unlike sportsbikes, which have a higher top-end and far more brutal acceleration (though the HP2 is certainly no slouch at 178kg with 83kW and 115Nm on tap), the BMW doesn’t need to be ridden in any kind of frenetic, “I’m going for Superpole!” fashion.

It is far too capable a motorcycle for that kind of nonsense. Sure, you can ride it like a total psychopath – but the point is that you just don’t have to to get the very best out of it.

You can ride it supermotard style, or you can hang off it like a racebike. It doesn’t care. It will do what you want it to do, every time.

It’s actually rare to ride a motorcycle that is so ridiculously capable. But it is certainly an unforgettable treat. My run into Sofala, via the back roads, was an exercise in pure faith. I had an unshakable belief that the HP2 could easily deal with whatever I wanted to throw at it, and as a consequence did ride a few stretches totally alone. Not because I’m any great shakes as a rider, but because the HP2 is so – well, damnably capable.

Yes, it’s that word again. I guess no other word really applies as much as that one does to this bike – and then all you can do is stick adjectives in front of it.

And feel free to bellyache about its 13lt fuel capacity (including 2.0lt in reserve). No-one is listening. This is not a touring bike, or a sports-tourer. I got 205 km out of a tank. It is enough.

Top speed? Well, I don’t know. But 242 didn’t seem to bother it none – and there was a bit left. Scared the crap out of me, but then I’m only human and punting a bike into an indicated 75km/h bend at 242km/h is not something my skills are up to. I’m convinced the HP2 wouldn’t have an issue with it, though. “It will do what you want it to do, every time.”

It’s about as exclusive a bike as one can get. Fewer than twelve were designated for Australia in 2007, and a similar number will be available this year – and they will only be sold against a specific order.

It’s not exactly a steal at $28,400 (plus ORC), but then I’m of the view that it is worth every single cent of its asking price.

And what price can you place on such infernal capability? 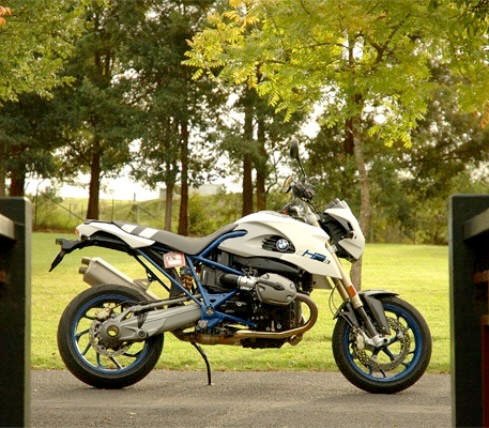