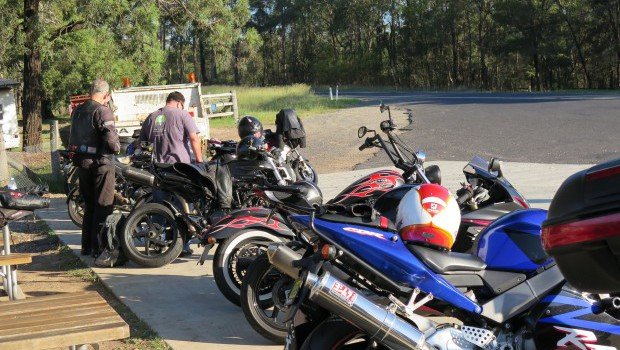 It was summer, so that is to be expected.

But it was a school night – and all the naughty boys and girls know there’s not a lot of Highway Patrol action around on a school night.

And it was hot. 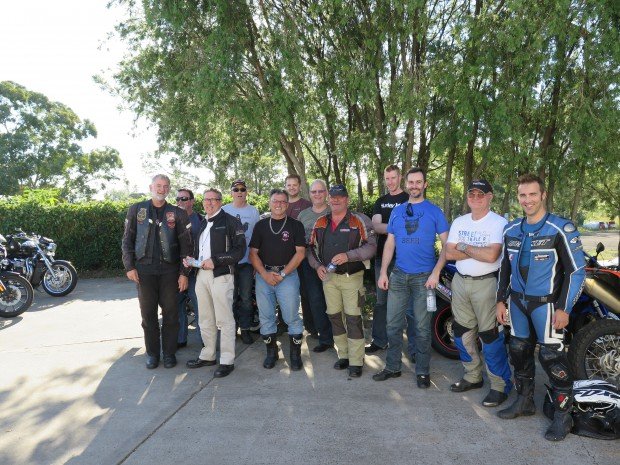 If this was Queensland, or Angola, they would all be in jail.

The heat always makes people a little crazy, but I do not say that like it is a bad thing.

I happen to like crazy. It keeps me sane.

There was also a full moon out.

And everyone knows that when one adds a full moon to any equation that involves motorcycles, deserted roads and heat, the level of awesome can rise to almost unbearable levels.

I think there were 12 participants.

I am not good with numbers, and once I run out of fingers, I stop caring.

There was also my Thunder of Freedom V-twin Victory with Flames and Apehangers and Whitewalls. 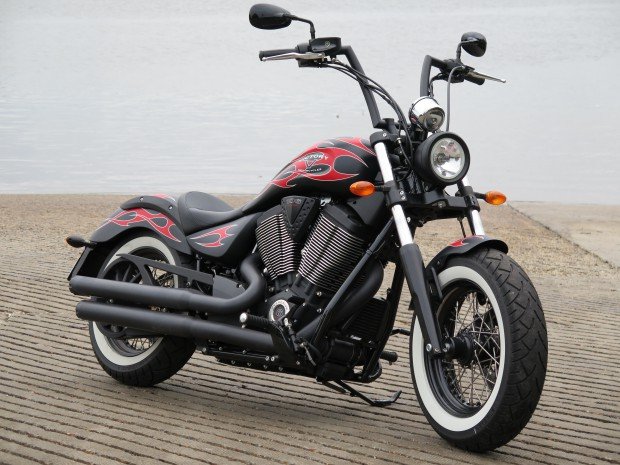 This is the rightest that Victory has ever got it.

And all who beheld it knew it was not to be trifled with.

As I explained to them, just before their eyes glazed over:

“Freedom comes, bastards,” I said. “Freedom goes. Tells me yes, then she tells me no. Freedom never stays long. Freedom moving along.”

Which is what happened at precisely six o’clock.

Freedom moved the fuck along up the Putty Road. 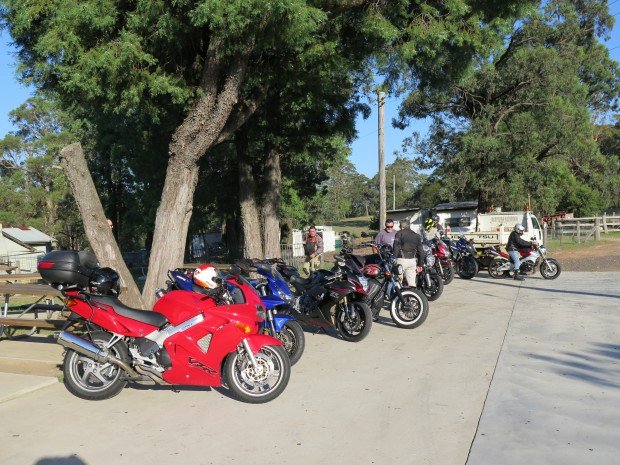 Lots of bikes. Only one set of whitewalls.

It was followed by a zesty assortment of worthies, among whose number were an Irishman, a Serb, a Sparky, an IT Guru, a Priest, a Serial Killer (who was also an IT Guru), a Tall Man, a Ducati Rider, a Pilot, an Explosives Expert and the Amazing Unkillable Bly.

Everything was going along kinda swimmingly as I began the luscious descent into the Colo River Valley. And then everything got even better.

The Thunder of Freedom V-twin Victory with Flames and Apehangers and Whitewalls encountered its first downhill hairpin, and promptly fired its left footpeg bobble straight into the face of the IT Expert sitting on its arse.

Good thing he was wearing a visor. It might have taken his eye out. 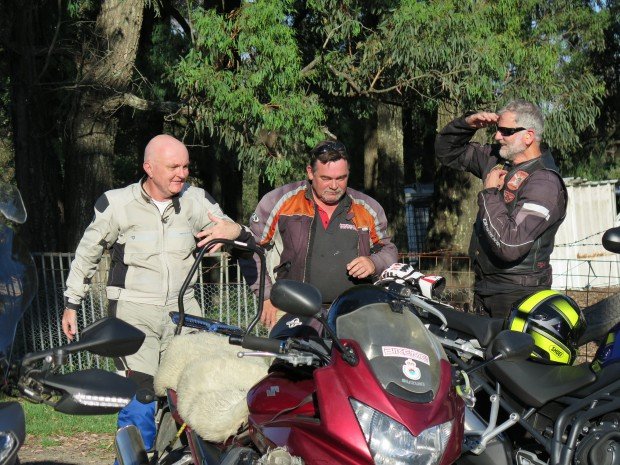 The venerable elders being bleached by the sun. 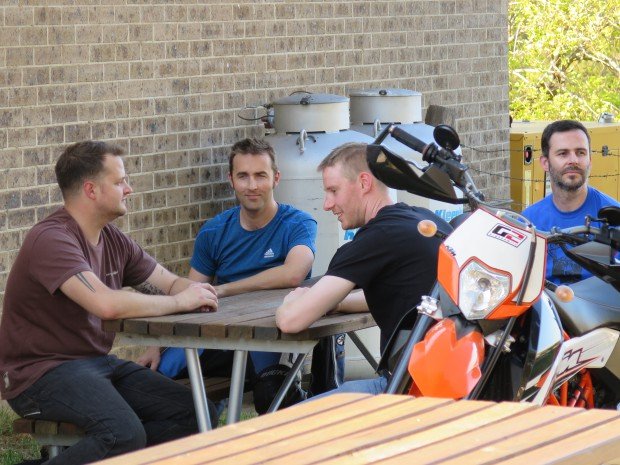 The youth was zesty and mostly well-groomed. 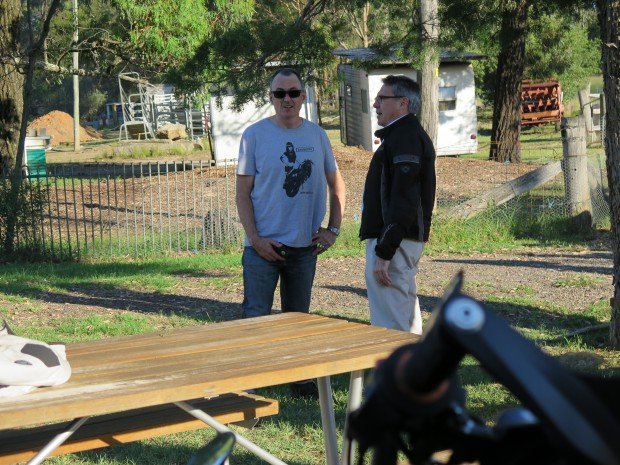 The IT expert then shot past me on his Fireblade, clearly concerned that the Thunder of Freedom V-twin Victory with Flames and Apehangers and Whitewalls might shoot other bits of itself at him as it lurched majestically up the other side of the valley.

I felt that my friend, Ezio, who gives me Victorys, would understand that when Freedom is making omelettes, eggs, perforce, must be broken.

Still, I would ask you to understand that there is yet to be a planet upon which a Thunder of Freedom V-twin Victory with Flames and Apehangers and Whitewalls will not be overtaken by a Fireblade or a Gixxer – every time. Omlette or no.

The Sparky astride his Gixxer passed me as well and chased after the IT Expert, for he and the IT Expert have this thing going on.

They will tell people, before their eyes also glaze over, that it is about podium positions.

Quite frankly, I will admit to having the same kinda thing going on. And Thunder of Freedom V-twin Victory with Flames and Apehangers and Whitewalls or not, I would do my best to secure a podium. 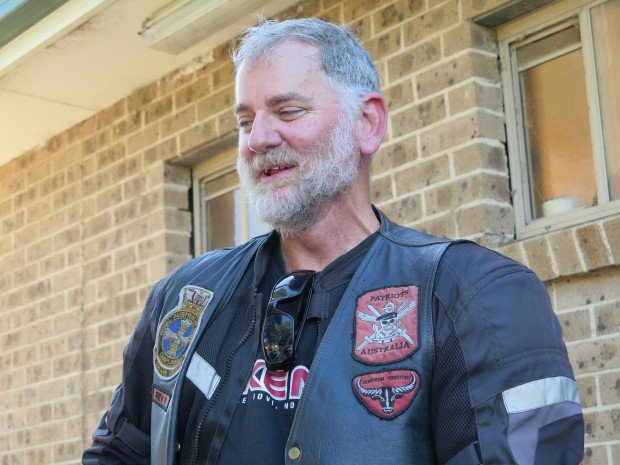 Now that the Sin Bosun has moved closer to the Source of all Evil, we both feel better about everything. 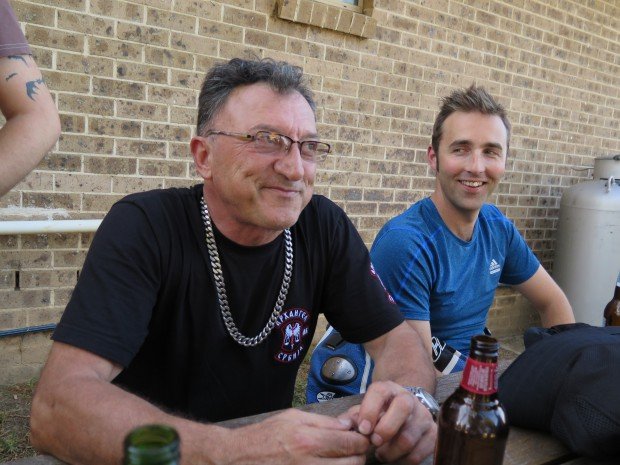 So I moved Freedom along some.

I wished for better suspension, greater ground clearance and another 120bhp, as I did so.

Suddenly, I found myself catching up to the Sparky.

Pretty as a sunny day, the Thunder of Freedom V-twin Victory with Flames and Apehangers and Whitewalls closed the gap on the Sparky.

The setting sun, into whose glare we were riding, was blinding us all a bit, and turning oncoming cars into Highway Patrol vehicles.

It was one of these hallucinations that had bedevilled and appalled the Sparky.

Well that is what he told me later as my eyes glazed over. 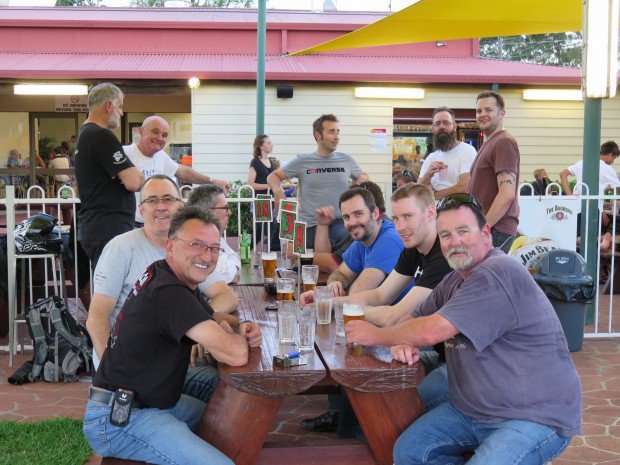 Sure, he passed me back and went on to claim a the second tier of the podium, relegating me to third. But the Thunder of Freedom V-twin Victory with Flames and Apehangers and Whitewalls passed him.

The non-podium finishers arrived in short order, and we looked upon them in contempt.

The IT Expert explained how moved his soul had been as he beheld the Thunder of Freedom V-twin Victory with Flames and Apehangers and Whitewalls fill the dusky golden evening with joyous sparks from its grinding nethers.

The Fireworks of Freedom,” I said to him in hushed and reverent tones.

He nodded respectfully. No further words would have been adequate at such a time.

All of us were pleased to note that the Amazing Unkillable Bly had remained totally unkilled thus far. And, had his bike’s fork seals not been replaced with rags and zip-ties, may well have secured a podium that afternoon.

The Son of Elvis arrived, smelling of Napisan, sleeplessness and fatherly pride – as all new fathers do for a time. It was a miracle that he had even been able to get away upon his Orange Austrian Spanking Plank, but he did, and it was good.

I asked if anyone wanted a coffee.

“There is beer here?”

“This is the Best Unknown Pub In The Universe,” I smiled. “Of course there is beer here.” 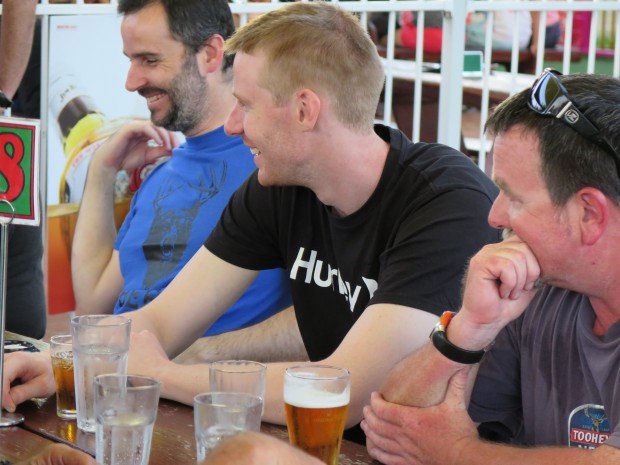 A long line of us trooped into the Best Unknown Pub In The Universe and purchased icy beverages from exotic breweries in Mexico, Tasmania and Lidcombe.

As the sun set, we sipped, we laughed, and we questioned each other’s sexuality, parentage, and manhood – as was right and proper in situations such as the one we found ourselves in.

The Serb asked me if I wanted another beer.

“No,” I said, unthinkingly.

He looked at me like I was some kind of retarded farmyard animal.

“Good,” he said with great relief and bought me another beer.

Suitably buoyed by our collective awesomeness, and cooled by the frosty blessings of the Best Unknown Pub In The Universe, we shrugged ourselves into our manfully sweaty bike gear and departed unto a place of feeding.

Once again, I found myself wishing for better suspension, more ground clearance and a further 120bhp – and would have settled for the horsepower alone, but that was only the beer talking inside my head. I still listen to its advice, but as I get older, I no longer act upon it as much. Such are the vagaries of age, I guess.

Happily, the Amazing Unkillable Bly once again refused to meet the Reaper. He really is getting very good at that.

We were to eat at the Place of the Wolf. 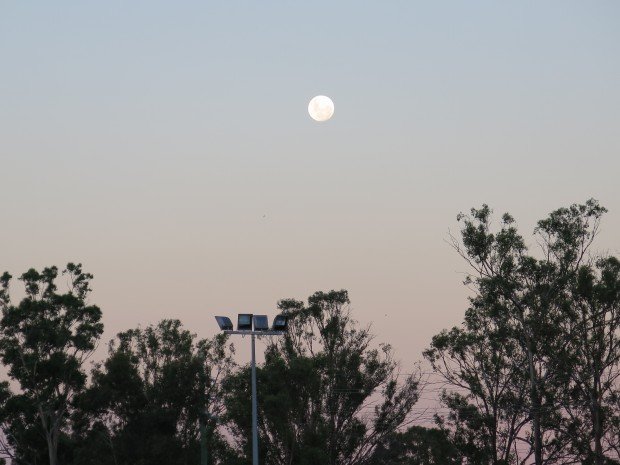 I blame it on the moon.

Some of us had eaten there before, and we hold the food to be good, the service leisurely and the ambience somewhat unchallenging. Often, this is all a man can expect in these troubled and troubling times.

The Serb immediately declared his vast hunger to the deeply unlovely, but most obliging serving woman, and caused her withered ovaries to spasm in bestial delight by adding the word “Baby” to his food order.

“I hev big epetayt,” he winked at her as she struggled to write down his order while her pelvis liquefied and folded in upon itself with hitherto unrequited lust.

That information seemed to be crucial.

While the rest of us were brought our meals by a young, though equally unlovely girl, the Serb’s double chicken parmigiana was personally handed to him by the elder one. Her musk was strong upon her.

“I vill buy you drink later,” the Serb twinkled at her.

“I’ll hold you to that,” she breathed back.

There was no doubt in any of our minds that that would not be the only thing she would hold him to.

“Surely you are not going to do what I think you are going to do?” I said to the Serb.

“Look,” he said, fixing me with a gaze that could be described as “gimlet” if people still used such wonderful words. “You are young end you do not understend. I vill explain…”

And he did. In Serbian, so that others would not leech from his wisdom. This wisdom, in essence, consisted of the experiential view that the more unfortunate-looking the woman, the more enthusiastic were her couplings. He then related a tale to me about how he had once mounted a very fat woman, describing his conquest as that of a tick upon the flesh of a frenzied bison.

It seemed most apt.

The full moon shone warmly upon our meals and laughter that evening.

When we made our goodbyes, the Serb remained behind. He was smiling as he watched the unlovely woman wipe down the tables while flicking her slightly crossed eyes at him.

The end of her shift was approaching.

And there are some things in this life that do not require the witness of other men.