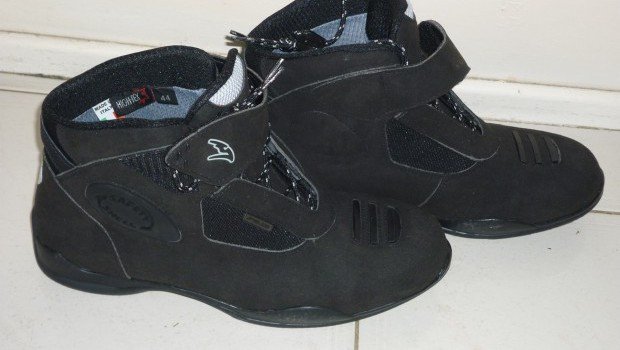 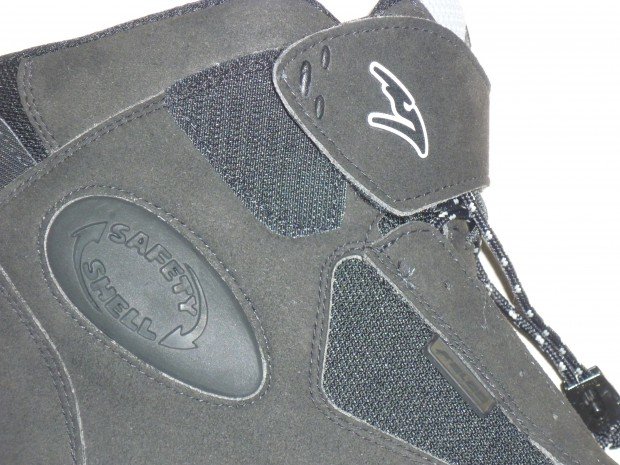 I tend to inhabit a piece of clothing I like until it begins to disintegrate and my wife tells me she is tired of being seen in the company of what looks like a raggedy homeless man. Thus girdled with the shame and opprobrium of my beloved, I sally forth into the world of retail (an unpleasant and difficult experience for everyone involved) and reluctantly purchase an identical item to replace the one I have worn to death.

I do not have much imagination when it comes to clothes, consider fashion a playground for women, own nothing that needs ironing other than a shirt I wear to go to court and dressy funerals, and the vast bulk of my clothing is based upon the riding of motorcycles.

At the start of summer, I noticed the motorcycle boots I had been wearing on an almost daily basis for the past two years had begun to show signs of extreme perishing. A normal person would have turfed them when the leather upper had developed holes around the gear-changing patch on the left foot and the sole had begun to part company with the upper. 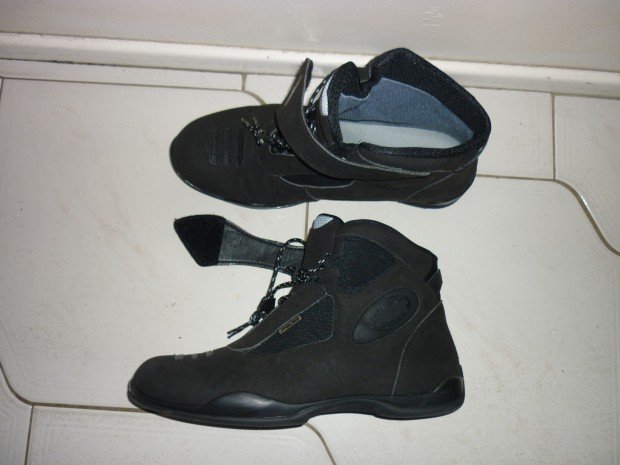 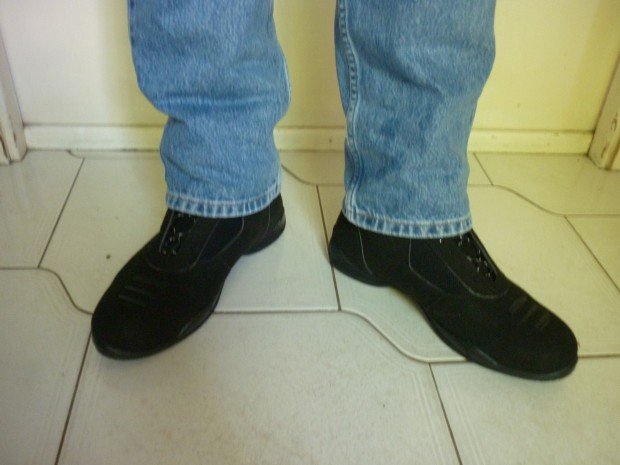 Not me. I kept wearing them. They were comfortable and had become so soft and pliable it was like wearing leather socks. Sure, I did look like I searched for food in garbage bins, but I wasn’t overly fussed by that. What I was fussed about was that their current state of disintegration had recently caused me to trip over errant bits of flapping rubber and almost die in my backyard.

There would be no dignity in such a demise. And maybe it was time I explored the world of fashionable motorcycling footwear in a little more depth.

I called Dave Maddock at Ficeda.

“Dave,” I said to him, “I need a sexy new motorcycle boot, that is not really a boot, but more like a shoe, but still has boot-like qualities, and is unquestionably masculine.”

“Who doesn’t like suede?” I replied, then panicked a bit. “It’s not brown suede, is it? Because that would compromise our mutual respect and admiration. For that is the nature of brown suede.”

“No!” Dave quickly shot back. “It is black suede. Brown suede is not permitted by law to be used in the manufacture of male motorcycle garments.” 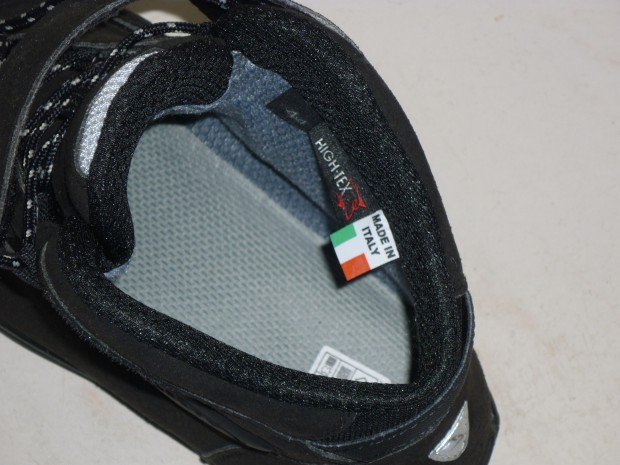 A few hours later, I was pulling on a pair of Falco Mod half-boots, while Dave kept a stern lookout for any brown suede that may have been lurking in the vast Ficeda warehouse

“These are pretty flash,” I grinned, strutting around in circles.

I can tell pretty much from the moment I pull on a pair of boots if I’m gonna get on with them.

The Falco Mods immediately promised a fruitful and comfy relationship. 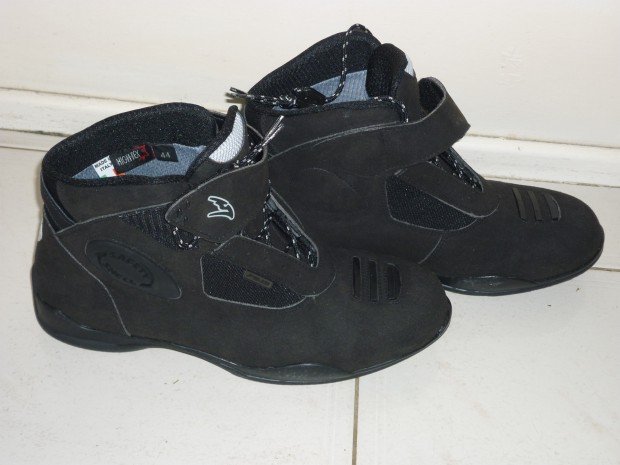 They slipped on easily and were secured upon my feet by means of toggled laces, that were then folded and then subsequently fastened around my respective ankles with Velcro straps.

Very modern and practical, I thought.

They are beautifully made (in Italy, no less), come with Falco’s trade-marked Air-Tech ventilation system and great arch support. The soles are flat and non-slip (a claim I test by wetting the Pebblecrete in my back yard and trying to skid upon it) and there is meaningful ankle support and protection.

There are three rubber re-enforcing strips on the gear-changing upper of the left boot (which are mirrored on the right so the boots don’t look wonky and strange), and once on, they cuddle your plates of meat with genuine tenderness and respect.

And they look flash as. 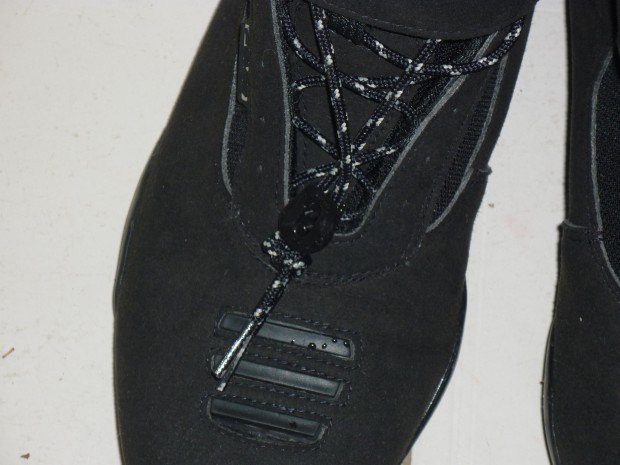 Which is important if you, like me, tend to live in your motorcycle gear.

The Mods are cool enough to look like a dress shoe, so you won’t be refused entry into a trendy nightclub, or reported to Human Resources for not being dressed appropriately for an office environment.

And they work a treat on a bike. Especially when it’s hot. And Sydney has been very much that in the last few weeks.

A full-length boot is a real chore in summer – particularly if it’s not vented or is water-proof. Your feet will sweat like a herd of Gadarene swine (Luke 8. 26-39) leaping off a cliff if you’re negotiating December traffic. Sure, there are vented race boots, but do you really wanna be one of those riders? And as beaut as race boots are, they are hardly made for clumping around in all day. And have you tried to dance in them?

That is a zero-sum game. 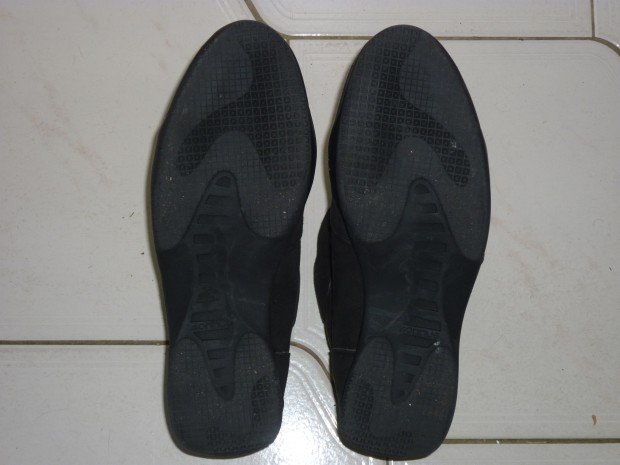 But these Falco Mods…well, I actually did go dancing in them – it is the party season, after all. And I have walked many Christmas shopping miles in them all around Sydney. I have also ridden almost 2500km in them.

Go try a pair on. Do a little dance. Make a little love. Get down tonight.

FALCO MOD (available only in black, which is a shame because they would rock in blue suede)

Check out Ficeda’s website and contact them for where you can get a pair you can go dancing in.