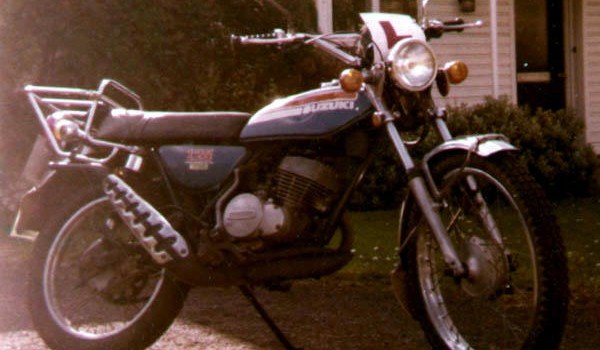 We all started somewhere. I started on this Suzuki TS125 in 1977. Despite the huge rack and the dent in the tank, I thought I was the cat’s pyjamas on this baby. God, I was young. 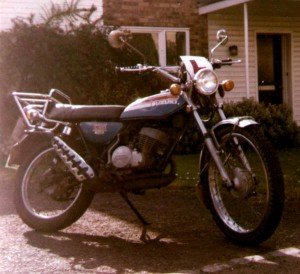 I had a plastic open face helment, PVC gloves and a profound belief in my own immortality. Couple of  ‘L’ plates, I was off. One day I crashed into the back of a car that did an emergency stop in front of me. From this I learned to leave an escape route around other vehicles. (Good job it wasn’t a tray top.) When I passed my test (a complete doddle in those days), I graduated to this: 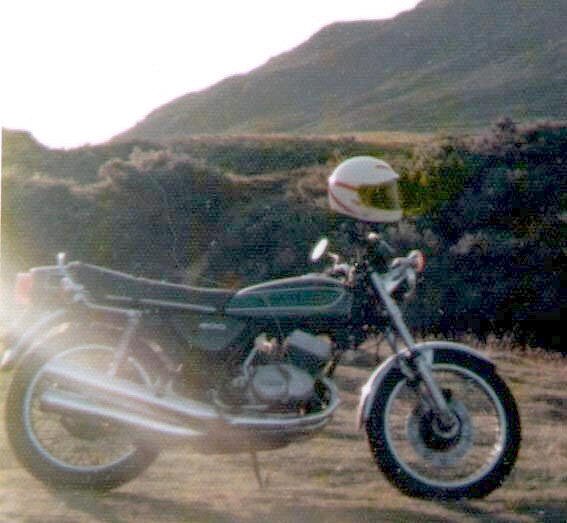 It’s a Kasasaki S3, forerunner to the KH400. A two-stroke triple, it looked gorgeous in its dark green metalflake. I took my dad on the back of this, and scared the living crap out of him. I had no idea how to ride it properly and almost killed myself when I didn’t make the turn on the by-pass ramp. Amazingly I missed all the steel sign posts, and the bike wasn’t too badly damaged either.

By this time I was reading ‘Bike’ magazine, which was perhaps the first magazine not written for people with Belstaff underwear, grey beards and grimy fingernails. It was launched and edited by Mark Williams. I had a high opinion of Mark. Not as high as his opinion of himself, but good nonetheless. ‘Bike’ was espousing the big single. Before too long I bought this gadget to use at university: 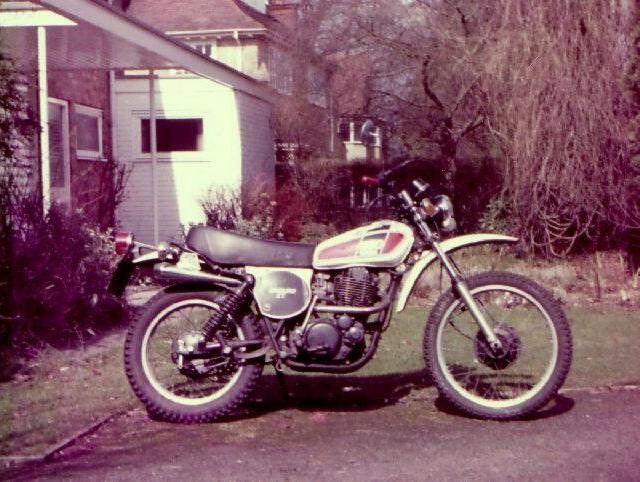 Notice the red handlebar grips. I was hip as. I also fitted the world’s loudest exhaust. That chrome-plated icecream cone is the full extent of the muffling… I couldn’t ride this one much either, but fortunately it was so slow it didn’t matter. I tried to get into home maintenance here, and almost broke my leg trying to start it after I buggered up the timing. I got knocked off this at university. I had a sprain and bad abrasion. My mate on the back had a broken leg. I think the dimwit who hit us got three points and a fine six months later…

Eventually I realised the XT500 was a dog, and bought this: 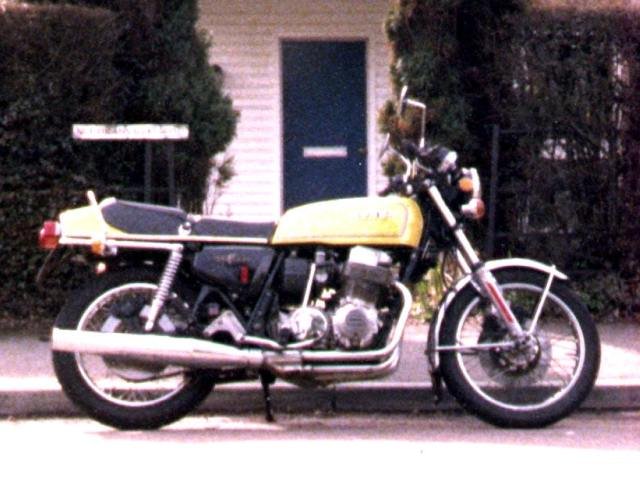 Looks like a complete shitheap now, but this baby was the first bike that really scared me with its performance. It really moved. It was also smooth and had lots of nice lights, which I thought was really cool in those days. After a while, ‘Bike’ magazine, now edited by Dave Calderwood, developed a project bike out of a Yamaha SR500. This was the road version of the XT500. Despite the project bike being a complete dog’s breakfast, with poo brown paint and an exhaust that blew itself all over the road, I was hooked.

This early “action shot” was created by me taking my baby brother out into the boonies around Brighton and refusing to take him home again until he’d taken losts of pictures of me cornering heroically. Or so I thought. Note the hot spot on the cheapo after-market muffler. Note also my quality foot wear. I’d learnt my lesson. Not.

Anyway, I soon realised this was another dog, and traded it on this, one of the best bikes I ever owned: 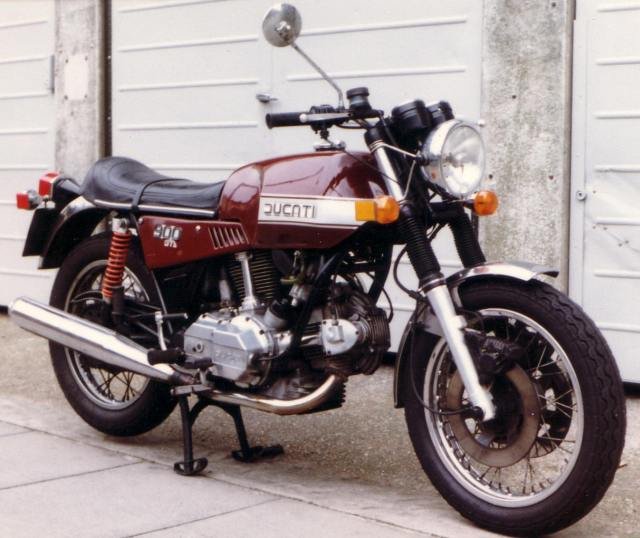 Now we’re talking! I took this bike to the Bol d’Or in 1980 (Starting First Kick story to come). Fantastic machine! I sold it so I could buy this: 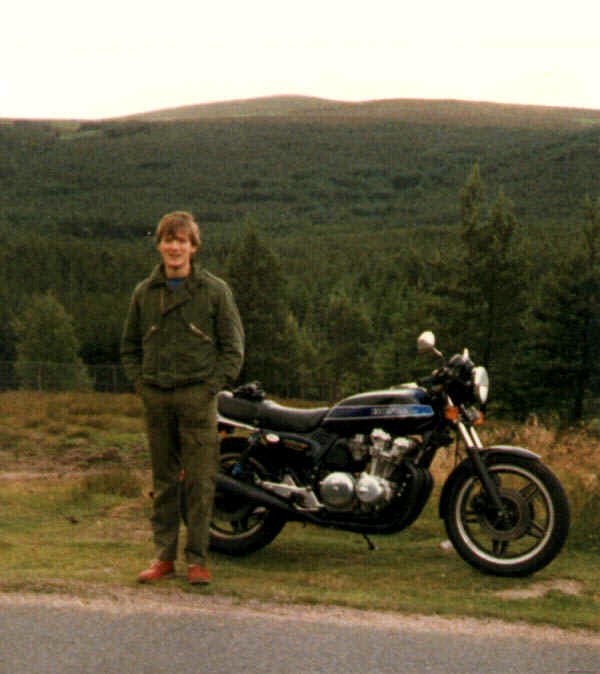 God I was an idiot. It had lots of power and blinking lights, but it didn’t handle, no matter how many colours the rear shocks were painted. Nevertheless, I did learn to ride a bit faster on the 900GTS and then this POS. I used to scrape the engine bars going around corners. Of course, one day the bars dug in and I fell off. The picture above shows the repaired bike, with the standard cans painted matt black (very trendy in those days) to cover the scratches. I took this overseas a couple of times before investing big in this: 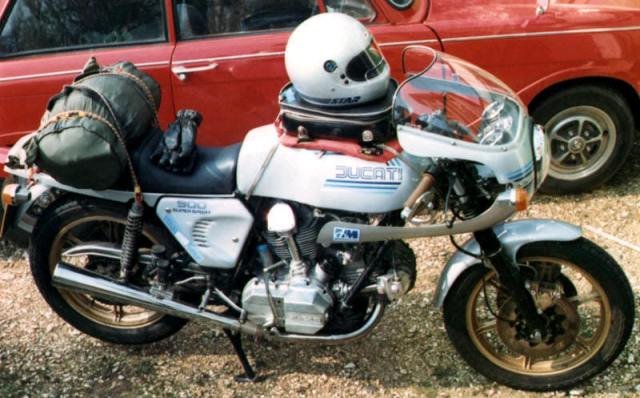 Note the ski gloves. Quality bike wear was still some way in the future. The Bell wasn’t bad. They were the top lid back then. For some reason I never really got on with the 900SS. I think it was just too uncomfortable. Despite a trip to the 1984 Le Mans, before long I’d gone with another craze: 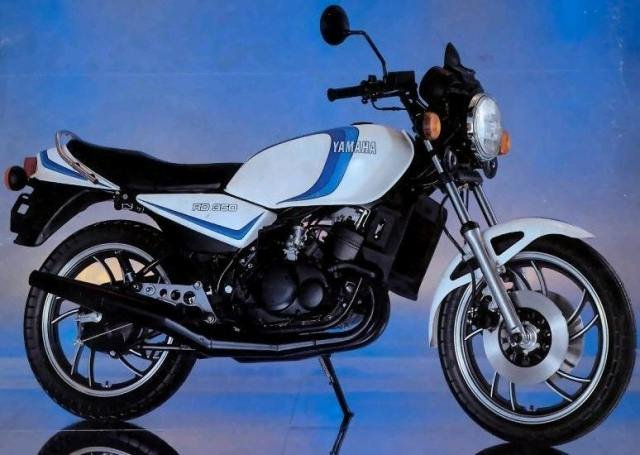 This is the only bike I don’t have a photo of, so I found this one on the Internet. This was a great bike, and could be credited with getting my mate Keith to go proddy racing. I loved it and did all the standard modifications. The forks were the weakest link and one had to have a brace, preload spacers and heavier oil as a minimum. I think I must have scared myself with the LC, because for some unaccountable reason I bought this: 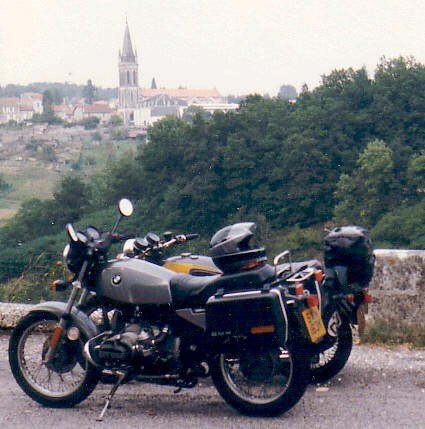 Ghastly thing. Had a measly 50hp. When you hit the brakes in anger the forks twisted like a pretzel. One day I cut a corner and the left pannier caught on a parked car and ripped in half. I didn’t have this long before I emigrated to Australia. Once there I bought the latest and greatest bike of the day, a Kawasaki GPZ900: 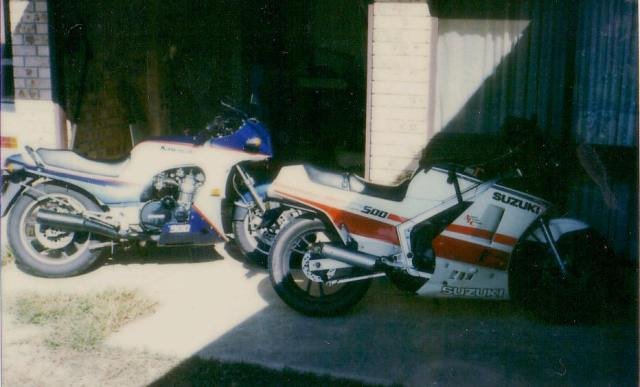 That’s it on the left. This was a very good bike, and I nearly lost my license on it. Eventually I sold it to my brother and bought the bike on the right, a Suzuki RG500. This had almost the same power, but a lot less weight and was the undisputed nutter’s bike of its time. Nevertheless it was hugely compromised on the road, and was only really fun when doing huge speed. The rest of the time it farted and buggered about, leaving more smoke than a cruise missile. I then bought the worst bike I’ve ever owned: 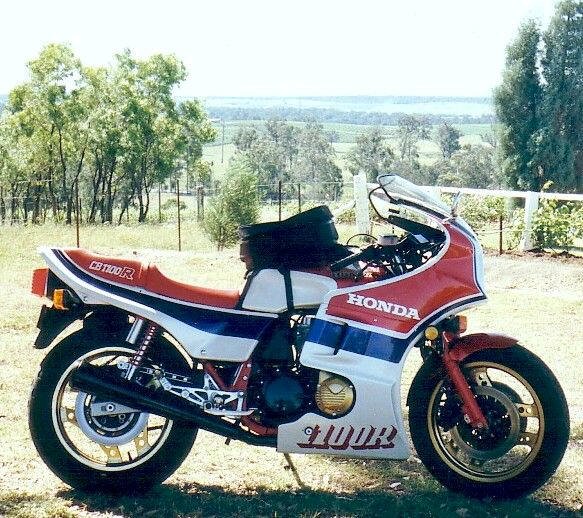 This thing. It weighed a ton, poured heat onto the rider, and wasn’t even all that fast. All it had was cred and I was growing out of that. It was now 1987 and I left Sydney for London once more. In London I did not buy another bike. Instead I bought one of the first Toyota MR2s. A yawn now, but at the time the car was a proper, mid-engined sports car at hot hatch prices. I got married and never bought another bike.

Until 2000. Now back in Australia with two kids, I finally figured out what that itch I’d been unable to scratch for 13 years really was. I bought this: 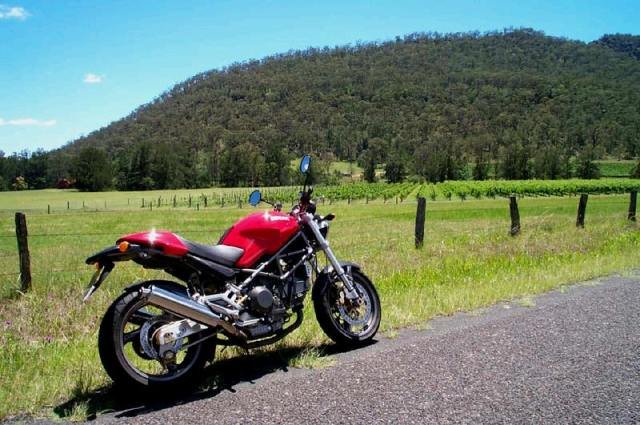 A Ducati Monster 750. I used this at the Australian Superbike School. As my skills improved I craved more power, and in short succession bought this: 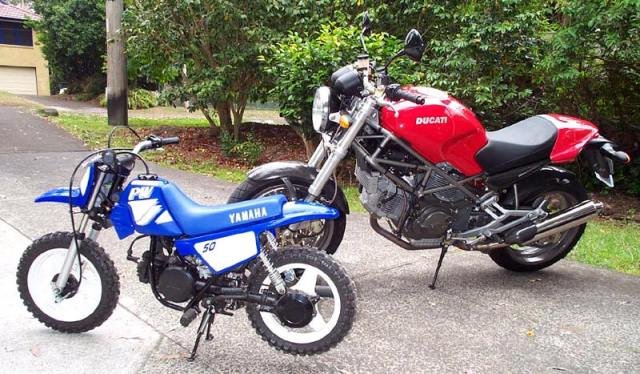 (Note the kid’s chook chaser!) And then this: 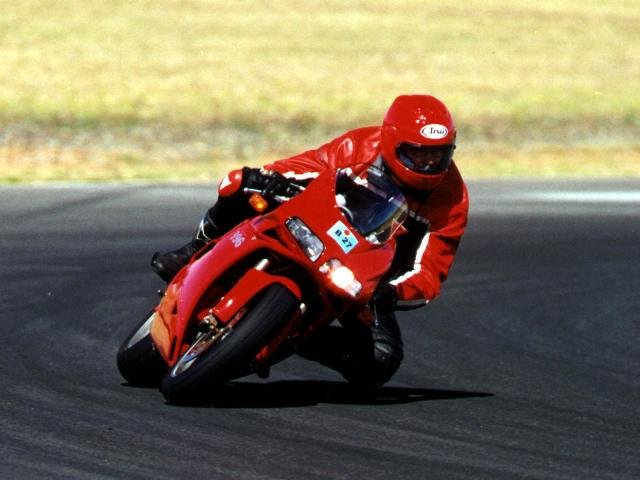 By now I was back into bikes big time. I loved the 996 and got my knee down on it around Eastern Creek. Most of my mods were to try and make the damn thing more comfortable – Helibars, that kind of thing. But it was never enough. When the more comfortable Tuono arrived, I had to have one. 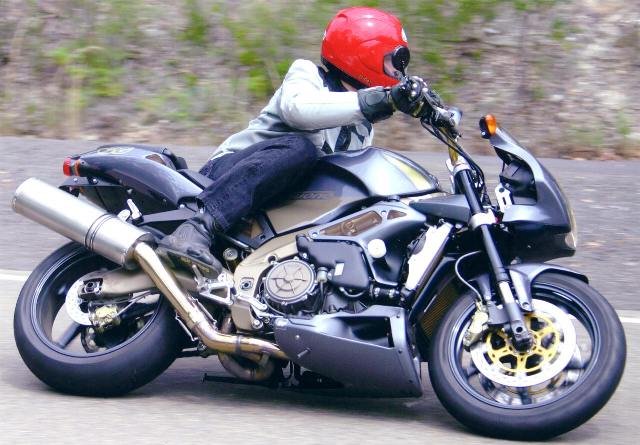 I had the Tuono for two years. Then in 2005 I fell for my first love… The big single. 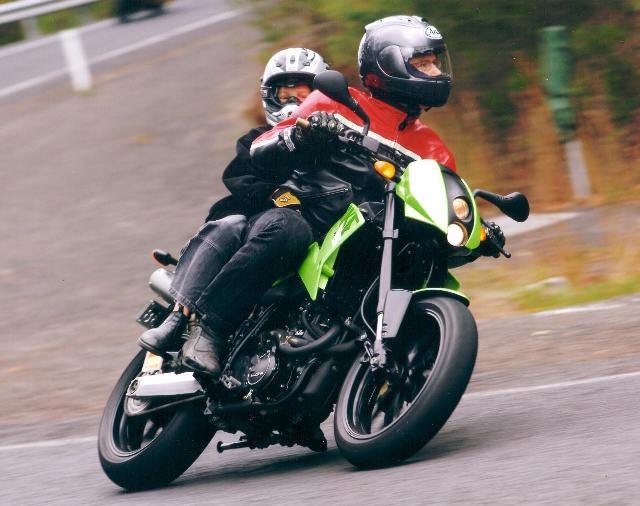 I put a lot of money into the KTM (if anyone’s interested in how to hot up the KTM 640 donk, email me) and I really enjoyed it. I’d love to have kept it when I bought this in March 2006: 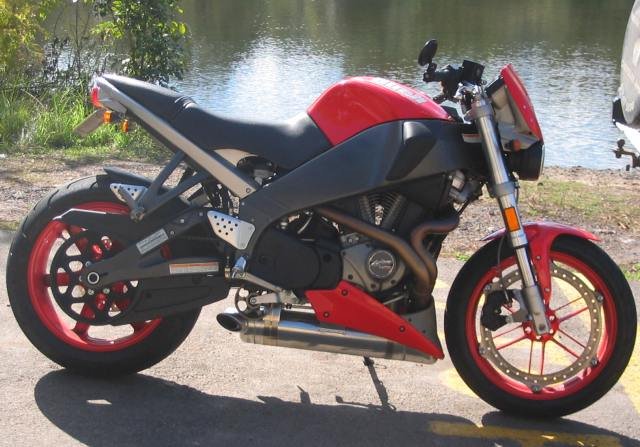