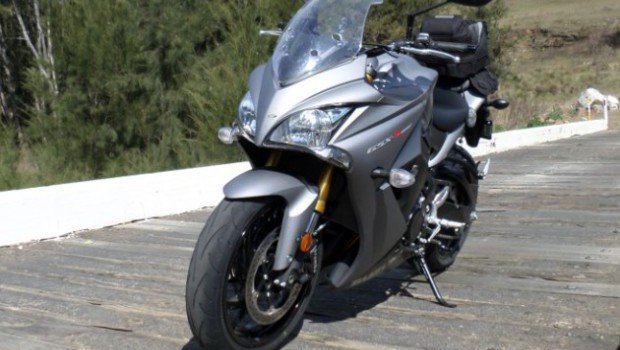 I knew the GSX-S1000F ABS wasn’t a sport-tourer when I tried to strap a seat bag to it. If I’m doing a five hundred kay day, I want to carry a tubeless tyre repair kit, a jacket liner and a pair of sunglasses. These are worthless fripperies to Suzuki, and it took some doing.

It was the Monday of the Labour Day long weekend. In New South Wales, the state government doubles the number of demerit points associated with traffic offences on long weekends, so people will hate the highway patrol. It works well. About twenty kays out, I passed a highway patrol car driver and a highway patrol motorcycle rider parked at the side of the motorway chatting. They gave me the stink-eye as I passed, and I gave them the stink-eye right back, and thus balance was restored to the universe.

I am all about the balance. I ride motorcycles, you know.

There were two cars working the road over the mountains. It’s a hard bike to ride at a constant speed. It has a sensitive throttle and a lot of power. I gave up after the second police car and let it have its head. It was great fun. The GSX-S1000F ABS is light and has massive midrange power, so you don’t have to change gears much. It also has good geometry, good suspension, a rigid chassis and a short wheelbase. You can place it anywhere, at any time, or lean angle, or speed, it seems. You can get used to that stuff real fast.

I went in to his town the unpatrolled way, and knocked on Bubba’s door. Mrs Bubba answered. “Hi”, I said. “I’m Al. Can Bubba come out to play?”

She said he could. He took some species of boy-child or stripling of theirs with him as pillion passenger. We rode the winding roads north of his home, and I let the GSX-S1000F ABS have its head every now and then. Some of the roads were dirt, and you can go really fast on dirt on a bike with ABS and traction control, so I went really fast.

I stopped for lunch. Bubba and the stripling didn’t. I headed home afterwards. Fun as it is, I don’t think the GSX-S1000F ABS is designed for the long haul on the sort of roads I ride. The suspension is firm, and you feel all the bumps. The seat is firm as well, and it bites after a couple of hours.

My buttocks were delightfully tender.