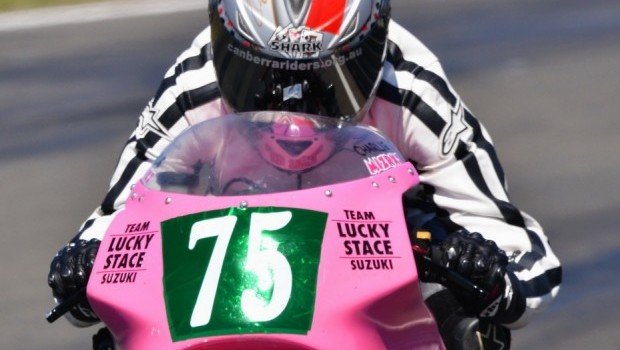 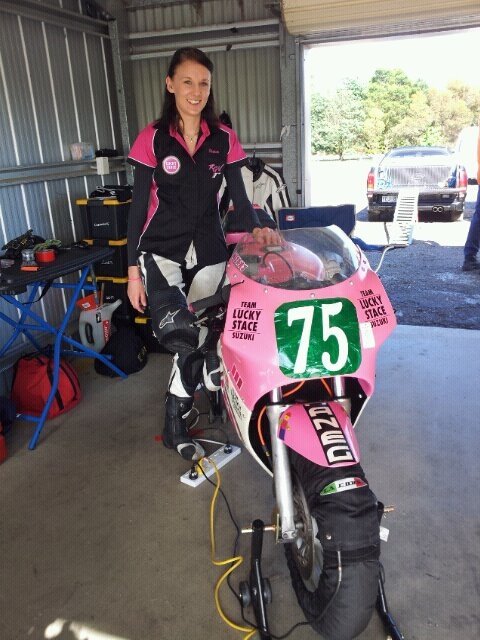 Stacey has been a long-time and much beloved member of BIKE ME! and it occurred to me that she is altogether unique.

Not only can she hand most blokes their arse on the road and on the track, she also looks rather spectacular doing it. Now I know that there will be accusations of shallowness and male-piggery, and I promise to give all of them the attention they deserve.

I have nothing but the utmost respect and admiration for Stacey, who’s ridden some miles with us all – and I’ve seen her camping in the dirt with the blokes, being swung upside down on a hammock until her eyes wanted to fall out of her head, drunk and a little bit crazy, but always classy. I have also seen her drop jaws and stop traffic when she gets dressed up and takes visiting BIKE ME! members out for a night on the town in Canberra. 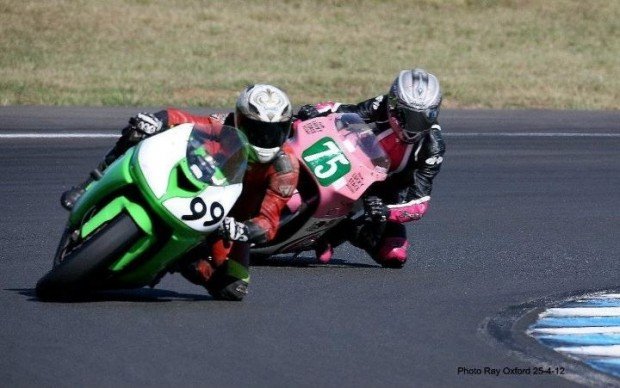 And yes, of course she passed Number 99. Probably.

But that aside, the issue is that Miss Van Wetering not only talks the talk, she very much walks the walk, and this is her story…

Stacey has been racing historics for only three years but it didn’t take long for the blokes to start taking her and the little pink bike seriously. Which is no mean feat in the testosterone-or-death world of motorcycle racing. 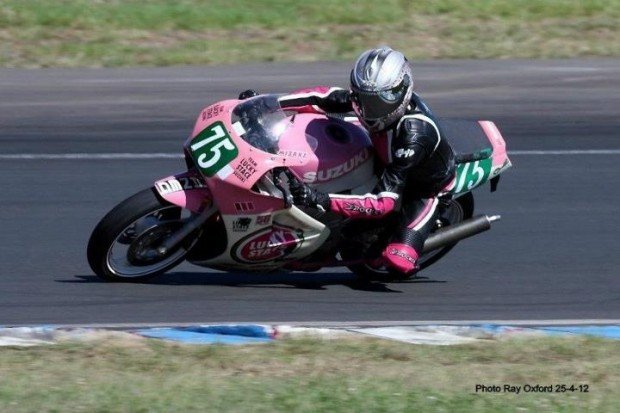 Oh she so does mean business on the track

Not long after getting her Ls in 2009, Stacey decided to improve her skills by doing track days on her Ninja 250R road bike. A wise choice and many beginner’s would do well to emulate this path. Even if they are male and not so hot-looking in a short dress.

It didn’t take long for the track bug to sink its fangs into Stacey’s tender flesh, and her very first track bike, a Suzuki Lucky Strike RGV250, was purchased in lieu of new shoes that month. 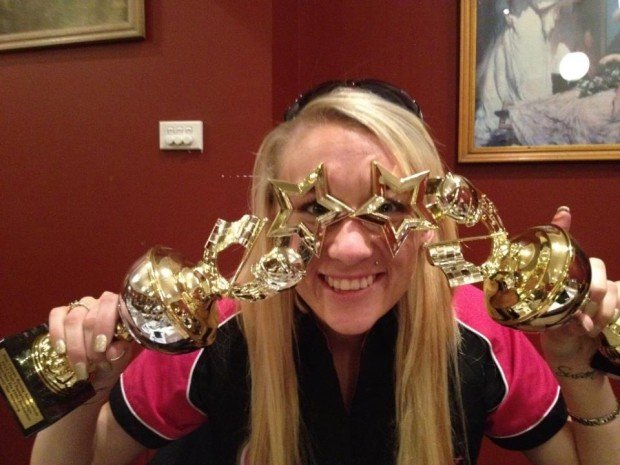 With stars in her eyes. Literally.

“The very distinctive Lucky Stace pink-and-white paint job started out as a bit of a fun joke on the Schwantz Lucky Strike paint scheme,” Stacey explained, demonstrating that sense of humour can be a valuable commodity when you’re cheating death. 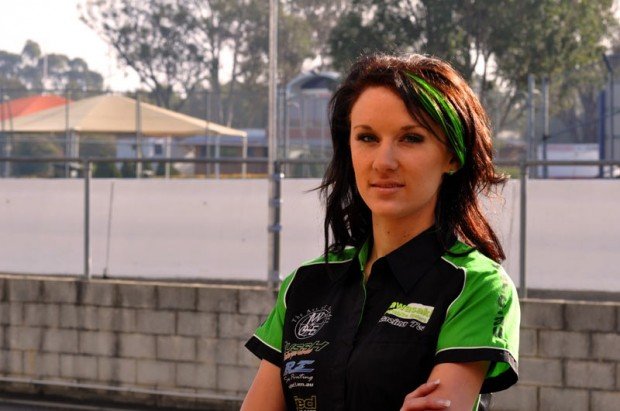 She took out fourth place in 2012, and secured third overall in the increasingly popular 250 production class at the 2013 Barry Sheene Festival of Speed. Troy Corser, concerned that his records may soon tumble at the high-heeled feet of Stacey, popped into her pit garage to congratulate her and pass on a few tips, which were all based around “Go faster.”

When she’s not racing or buying shoes, Stacey bangs around on a Suzuki SV650, and is building up a Suzuki GT250 cafe racer. She also does the altruism thing and passes on her skills and knowledge to other women at Girls Only Track Days.

In 2014, Stacey will be taking on pit-bitching duties for her husband on his RD250LC, as well as racing her RGV. Rumour has it, she will also essay this crazy dirt biking caper she’s heard a lot about, and while she’s still young enough to heal well and quickly. 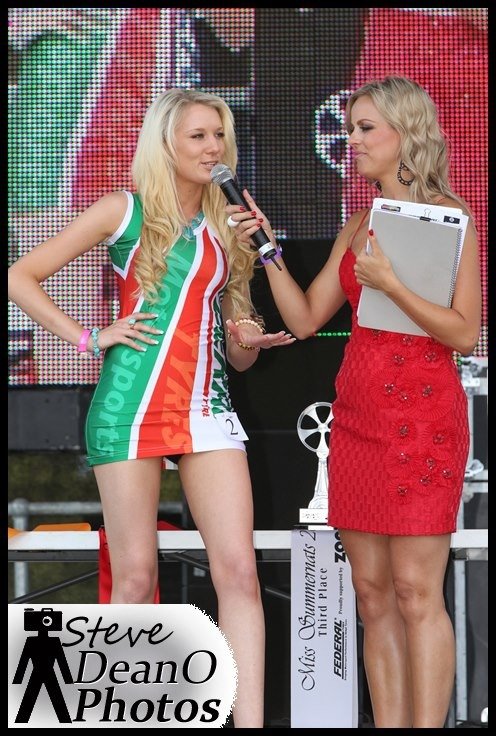 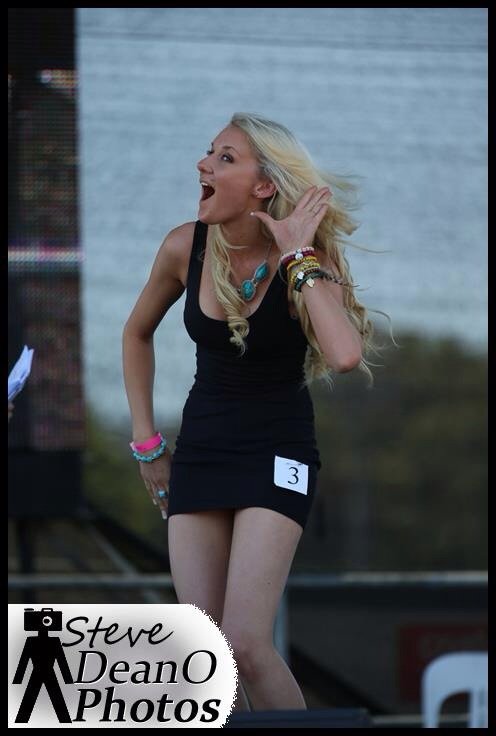 Many proposals of marriage were yelled at her on stage

How old are you? Yes, I know one is not meant to ask women questions about their age, but I am an old iconoclast.

What is it that compels you to race?

“The pure joy of the speed. There’s nothing like track racing; the pleasure kick of seeing how late you can brake and turn, to override your brain telling you that you should be at home doing something safer, like knitting. Nothing comes close to the awesome moment when you brake so late your helmet is against your rev counter, hit the apex perfectly with your knee buried in the black stuff, then getting on the throttle at just the right point and spearing off towards the next bend to do it all again. Straight-line speed is for wankers. Corners are where the real fun is at. I’m a massive adrenaline junkie with a competitive streak a mile wide, and this is my personal brand of the good stuff.” 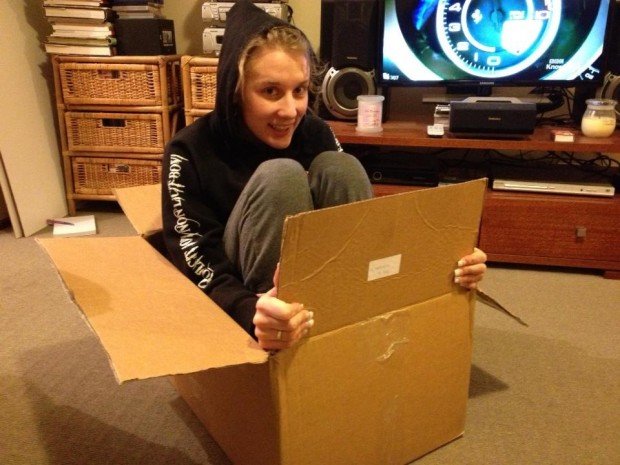 We sent her a box full of hoodies once. She threw out the hoodies and played for hours in the box.

How do blokes treat you on the track?

“Just like I’m one of the guys. I get no special treatment on track or in the pits, except maybe they’re a little more polite and less sweary. The second those visors come down, it’s war until that chequered flag comes out. I’d say they almost go a little harder on me, pass a little closer, just to remind me if I want play with the boys, then expect to be treated like the boys. It builds character and is a good incentive to make me fight harder on the track”

Is it hard being a girlie-girl and a racer at the same time?

“Nope. I don’t understand lady riders who complain it’s so hard to be girly and ride, or find gear that’s feminine when everything is black. Ladies, two rules to remember: Heels with any outfit and messy helmet hair is in every season. Problem solved” 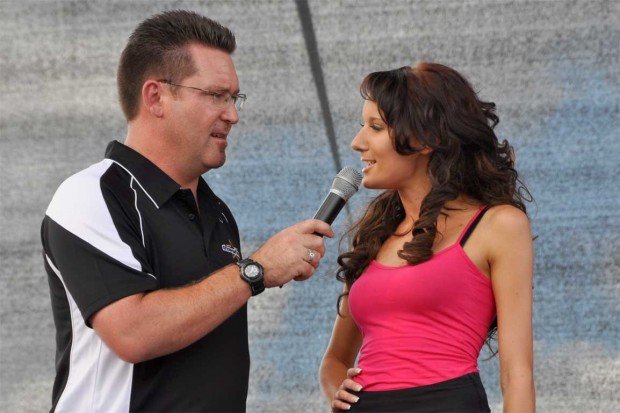 “Your lap-time is shameful for a man.”

What is your greatest racing moment?

“Slamming the door on a my biggest rival coming into Turn Four at the Sydney Motorsport Park at the Barry Sheene this year. I caught a glimpse of him coming up on the inside and wasn’t going to bear the shame of having him pass me when everyone was up on the pit roof watching. Without hesitating, I just tipped the bike in, got on the gas early and squeezed him out. I screamed like a maniac round to Turn Six when I realised I’d stuck it and then forgot about my braking marker into Turn Six and made huge distance there too. My crew were going berserk when I came back in after the race. They didn’t expect me to make the move, let alone gap the other bike by so much! He came around to my garage after the race to shake my hand and congratulate me for making the move stick. It caught him totally unawares and he admitted he had completely underestimated my riding.” 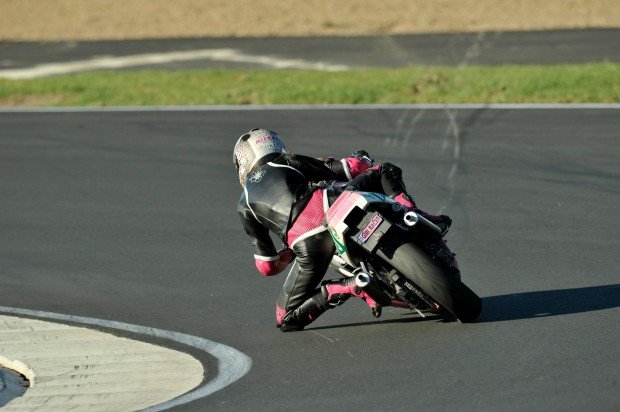 “Must not break a nail…”

What is your shittiest racing moment?

“So far I’ve been very lucky to start and finish every race except one – the One-Hour Enduro race at Wakefield Park when the rear brake seized on me mid-lap. Thankfully my race partner was on it and not me! It meant Race Control had to bring out the safety car in the last five laps while they moved the bike. The other racers were pretty upset, but were understanding after they found out why it was parked midway along the straight.” 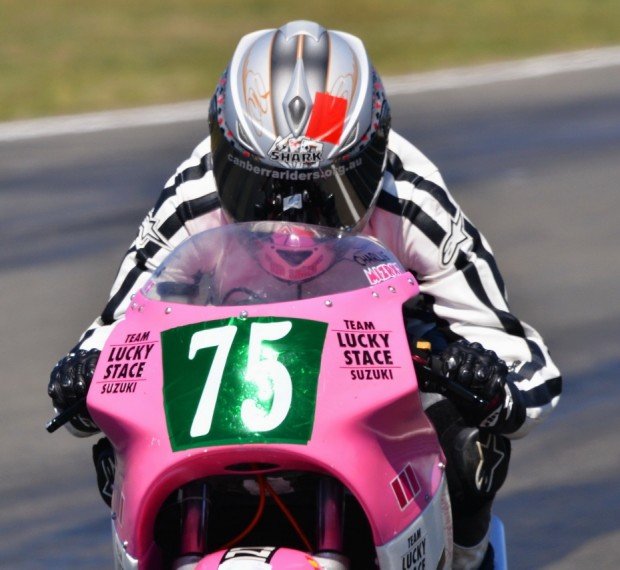 On it. Just fucken on it.

Who is your racing idol?

Cam Donald – a really down-to-earth normal kinda guy who genuinely loves what he does. The guy is a racing god. In fact, anyone who has the guts to race the IOM TT is a legend in my book.

What is it with you and shoes? 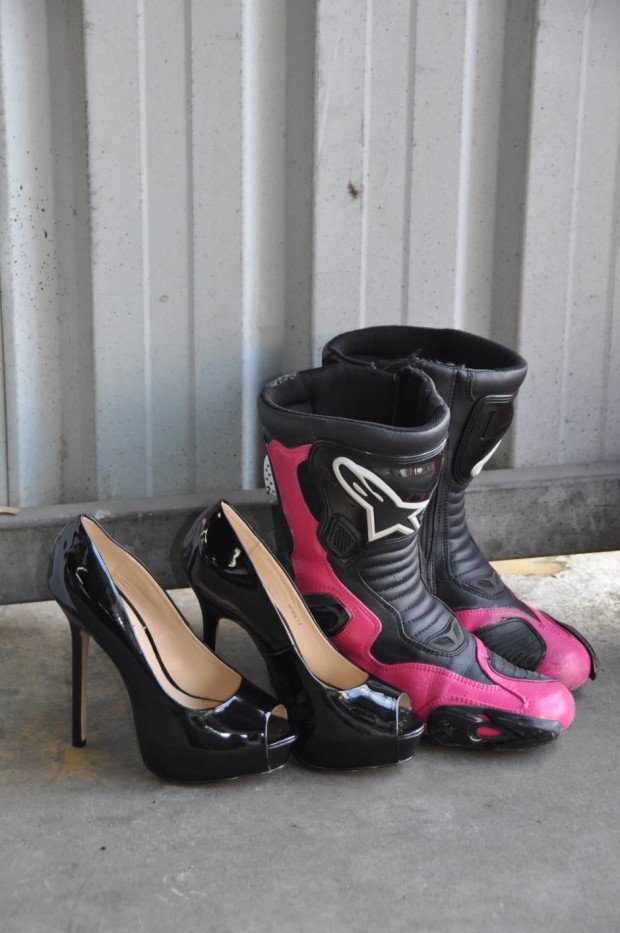 No, this is not Robbie Phillis’ pit garage

What is your favourite racetrack?

“Phillip Island, for sure. It’s the Aussie holy grail for track riders. I love the sea spray you smell as you come out of Southern Loop, it reminds you that you’re riding the same tarmac the Big Boys play on. Makes you feel a bit like Superman for a few laps, even if you’re on a little bike at the back of the pack.”

“46 for life. Although I still don’t understand the hanging inside leg, I’ve given it a go and nearly lost it. I might give that one a miss…” 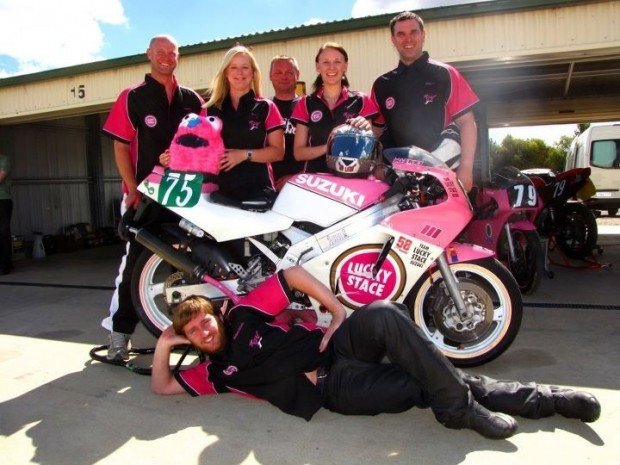