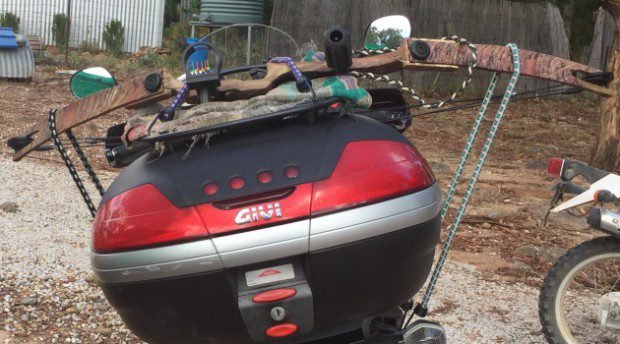 I told Ben I would drop up on Sunday and pick up my compound bow. I hadn’t been for a ride in two or three weekends and the cabin fever was setting in. Also, I had to make sure my clutch hand would handle the Tumbarumba Tourist Trophy ride the following Friday.

There was a domestic emergency Saturday. The girl-child reported that the serpent Monty had taken two big dumps and then crawled through them and was covered in snake shit. She consulted Google about bathing serpents. Apparently it’s a thing.

“This is tomorrow night’s problem”, I told her. “I am going up to Ben’s to pick up my bow. Serpents spend a lot of time on the ground, and they must be self-cleaning to an extent. Let’s see how much comes off as he rubs against the substrate and his log and his branch for a day.”

I wasn’t looking forward to it. I somehow ended up with the responsibility of wrangling him at cage cleaning time and feeding him dead rats. I wear my motorcycle gloves while I do it, because he bites. I didn’t want to put them back in my helmet covered in serpent dirt.

It’s three and a half hours to Ben’s. I got there at 14:40. It was a good ride. The only real moment was on the dirt road 800m before Ben’s place, when four wallabies burst on to the road in front of me.

“Have you had lunch?” he asked.

“I put some low-fat beer in the freezer twenty minutes ago”, he said.

We drank a beer. We swapped stories for an hour or so. He got my bow out, and we strapped it to the rack on top of the Givi case. I left.

There was a jacky dragon and a tortoise on the dirt on the way back, but no more wallabies. I missed both.

Three hours later I stopped near the on-ramp to the motorway and texted my ETA home. Then I took my glasses off and put them on the seat, and picked up my helmet as a red Holden Commodore pulled in behind me. The door opened and a cop got out. “Sneaky bugger,” I thought.

“Just a minute”, he called.

I put my helmet down and put my glasses back on. He seemed to have a problem. I knew just what to say.

“What seems to be the problem, officer?” I asked.

“There’s no problem,” he said. “First, I have to tell you that this conversation is being recorded. I just noticed what you have on the back of your bike. When we see people carrying weapons we wonder where they’re going.”

I looked at the car. There was no-one else in it. I wondered who “we” were. Maybe he was using the royal “we”, I thought. Maybe he’s a prince. I wondered if I should call him “your Highness” or something. I used to know a Samoan prince, but I just called him Bill, and he was okay with that. I decided to leave “your Highness” out of it.

“Not really a weapon”, I said. “I don’t have any arrows with me. But in answer to your question, I’m going home.”

I told him my address.

“Can I see your licence please?” he asked.

I gave it to him. He checked it. “Still at this address?” he asked.

I hadn’t moved house in the last fifteen seconds, so I said “Yep.”

“Had anything to drink today?” he asked.

“I had one beer four hours ago”, I said.

He had a testing device in his hand. “You don’t have to do this”, I said. “I am as sober as an imam. Truly rural. British constitution. She stood on the steps of Burgess’s fish sauce shop mimicking him hiccuping and welcoming him in.”

He held the device in front of my face. “Count to ten, please”, he said.

His eyes narrowed, but he left it there. He looked at his device. I looked at his car. It had the setting sun behind it. A photo wouldn’t work.

Easy for HIM to say. HE wasn’t going to get python shit on his summer gloves.