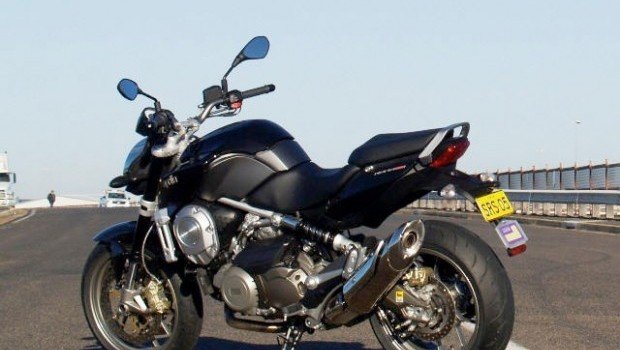 My initial thoughts of Aprilia’s Mana 850 were horribly sceptical but simple: why in the name of the Road Gods would I want to ride a motorcycle that didn’t have a clutch? Any butt-plug can ride a scooter, but it takes a special kind of coordinated butt-plug to make a bike get moving. You’ve got the twisty thing on the right, the maker of noise from your exhaust, and the lever on the left, killer of newbies’ bike-riding dreams. Getting the two working together to propel you off into the sunset with a shit-eating grin of epic proportions saturating the innards of your helmet is a task that requires grace and intelligence – or much beer.

Sure I can appreciate driving an automatic transmission car. Cars are boring and making them simpler is par for the course. But motorbikes are all about the interaction between man and machine – it’s a whole-body experience. To me, it appeared that taking away the clutch would be like removing vaginas from women – what’s the point? 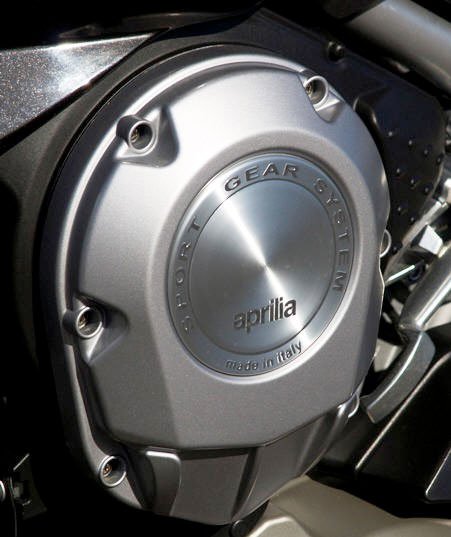 As I cleared my mind of the dislike I had already managed to develop, I sat astride the bike and had a quick look around. It immediately brought on flashbacks of the Shiver I lived with a while ago. The two share the same 90º V-twin but the Mana’s is 89cc bigger and, on second inspection, the whole bike looks like the Shiver’s plumper, uglier, red-headed step-brother.

I kicked it over to be greeted to its beautiful, meaty, raucous exhaust burble. With stock pipes, I was quite impressed. Suddenly the god-awful commute home seemed a little brighter. After a brief scare as I nearly crashed the thing into a giant concrete pillar turning it around (“WHERE’S THE FACKING CLUTCH?!”), I was soon up the ramp and into the m??. 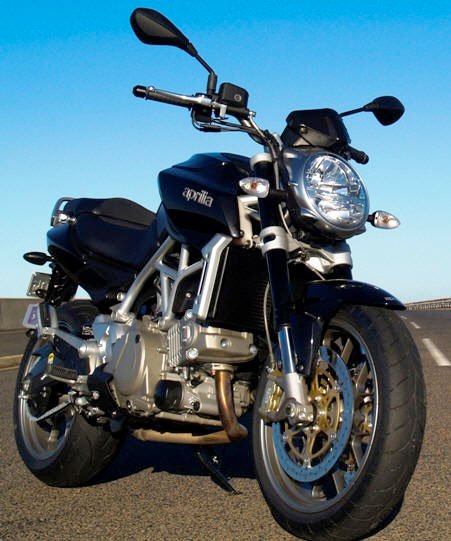 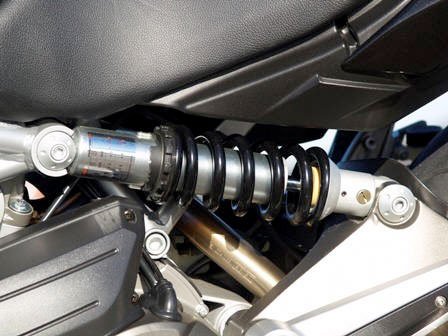 A few kilometres into my trip, I was marvelling at how well the engine was responding to the go-tube in my right hand. I had left it in fully-automatic mode and, despite my deliberate attempts to confuse the gizmos inside, it performed admirably. It was very easy to ride ? the lite version of biking.

The Mana made me laugh when a prick in a Mazda decided that the best course of action was to fly in front of me and slam on the brakes for a reason only he was aware of. Hard on my own brakes before I went up the arse of his car, I was back on the throttle and flying up alongside him with the Mana giving it all to our cause. I extended my left hand and gave him the single-fingered salute through three gear changes before lane-splitting off into the distance, laughter echoing around my helmet. With the throttle at the stop, that 850cc engine isn’t as scooter-like in its pick-up as I had been expecting.

There is a ‘+’ and ‘-‘ paddle on the left-hand switchgear which you can use to select your gear if you want. Quite frankly, I just couldn’t be bothered. I did try it for a while but the Mana was doing a top-notch job of running itself and I had come to terms with the fact that I was riding a scooterfied motorbike, so it was just simpler to let it get on with business. The system works well but fails to replicate the gear-change sensation enough to warrant use.

As far as suspension goes, you’ve got a set of 43mm inverted forks which are, unsurprisingly, non-adjustable. A simple bike for simple folk, perhaps? They worked all right during my ride and were set up well enough to have a fairly decent go at corners. Out the back there’s an offset, linkless monoshock with adjustable preload and rebound. Again, it’s sufficient for the Mana – a bit soft, but sufficient. 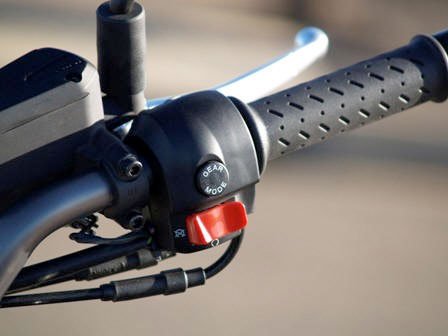 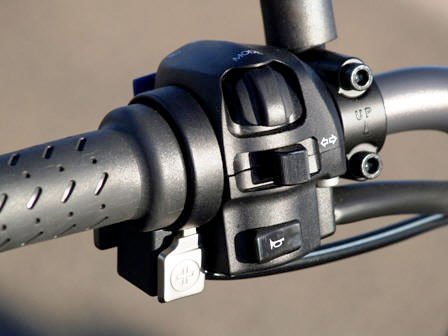 Sequential or Autodrive? And the shift button.

Front brakes consist of two 320mm discs and radial-mounted, four-piston calipers while the rear has a 240mm disc and a single-piston caliper. The rear was near impossible to lock up, no matter how hard I tried and stomped on the damn thing. The front was really quite responsive and felt like it may have even been a bit too much for the overall package.

Another thing missing from the bike besides a clutch lever is a conventional fuel tank. The space you would normally expect to fill up with go-juice is, in fact, a giant great hole for you to put stuff in. It is large, spacious, has a 12-volt plug and will happily eat a full-face helmet. The fuel resides under the pillion seat and all around that area ? sure to piss a bunch of people off, this is, but I never got it cranking fast enough to know if the extra sloshing weight made a difference to stability or not.

Someone whose name evades me described the Mana as “the answer to a question that no one asked”. I’d have to say after my brief ride that I’m inclined to agree — while I sure enjoyed the novelty of not having to change gears for two days, there is no way that I would own an automatic motorcycle while all my limbs were still attached and functioning correctly. The concept appears to have been executed flawlessly and the all-round package is pretty solid as far as I’m concerned but it’s just not for me. And, sadly, I believe that a lot of other motorcycling-type people will feel the same.