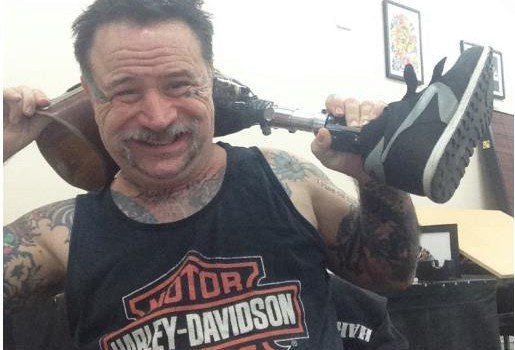 Once upon a time, if a man had an honest job, worked hard, paid his taxes, and committed no crime, he could sleep at night, safe in the knowledge that he was contributing positively to society and as such, held no fear of  the Government infringing on his civil liberties or a state-sanctioned violation of his personal freedoms.

Under the auspice of cracking down on organised crime and keeping Queenslanders safe, the Three Stooges set up the perfect legislative arrangements to bypass the courts and treat arbitrarily declared groups of people, no matter how innocent, as criminals. Rather than punish people for crimes committed, the new law and order regime punished people for association alone.

And so it came to be that Angelo Garozzo, owner of Caloundra Tattoo Studio, a man who has worked his whole life, employed staff and paid his taxes, a man with a family; wife, children, stepchildren and five grandchildren, a man with no criminal record whatsoever, has had his life turned upside down, and his livelihood destroyed, simply because he is a member of a One Percent club. 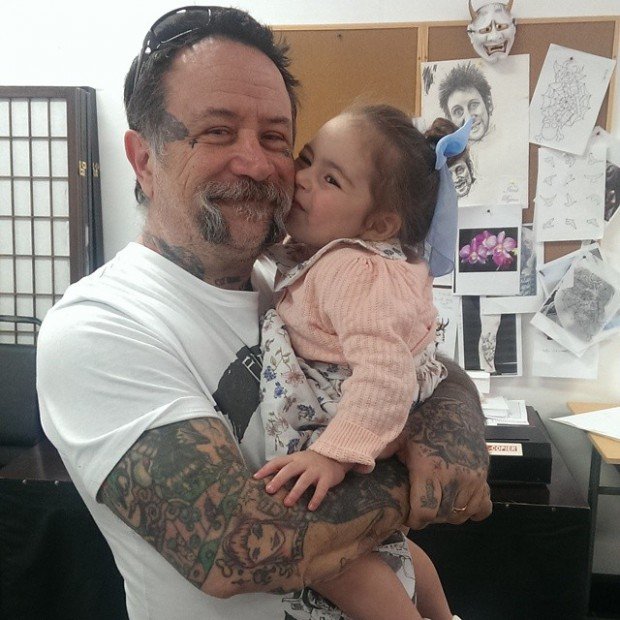 With the smug smile of a petulant, self-entitled thug, Bleijie legislatively changed Angelo’s legal status, directly affecting his ability to participate as a member of the community and exercise his basic human rights.

Angelo, who was born in Italy and moved with his family to Australia as an eight-year-old boy, couldn’t speak English when he first arrived. Already an outsider, the young Angelo drifted to the edges of mainstream society. Passionate about motorcycles, he found a brotherhood in the Rebels Motorcycle Club where he experienced camaraderie, friendship and belonging. For over twenty years, the club has been his family.

He wasn’t always a tattooist. Angelo’s first trade was as a tool-maker. But as his former chosen career path fell over and the industry fizzled with products sourced overseas, Angelo followed his heart and soul. Intrigued by his father’s tattoos, and having been a gifted artist at school, he combined his fascination with his natural talent.

Thirty years ago, his new life began in a tattoo parlour in the suburbs of Sydney. Moving to Queensland ten years later, he has worked his tattoo magic on thousands of people including sport stars, police officers, lawyers, barristers, osteopaths, doctors, and surgeons. 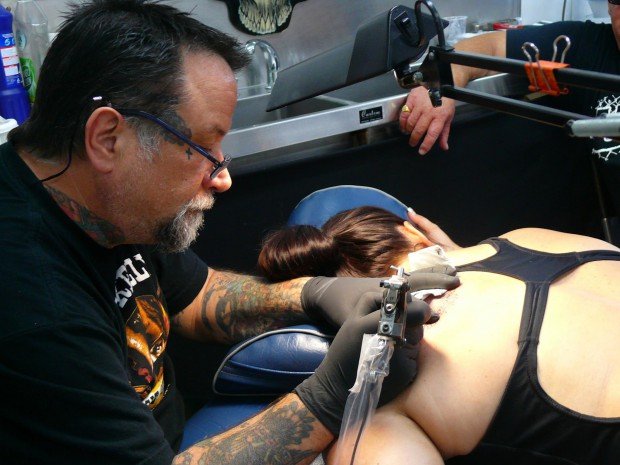 Angelo is no longer permitted to work.

And now it is over. Gone. Torn away by a faceless bureaucrat on the orders of a soulless and heartless Police Commissioner.

Angelo’s only indiscretion is standing up against the bullying and harassment of the Queensland Government and its henchmen. By speaking out and refusing to bow down under relentless abuse and personal vilification, he has made himself a target.

Because Newman, Bleijie and Dempsey reacted to an image, a reputation, and a fantasy, and declared Angelo, and each and every one of Angelo’s brothers, a criminal.

Yet instead of caving in to the vilification, Angelo stood up. Just as a decent man does not disown his blood-brothers, neither did Angelo disown his club brothers because an ill-informed and scaremongering Government distorted the truth for political advantage.

Angelo is not one of these men. Yet he is being punished and sanctioned, harassed and degraded, his livelihood stripped away.

Before November 2013, when the abhorrent laws were enacted, Angelo was already known to the police through his membership of the Rebels. One percent motorcycle clubs have, for decades, been the target of police attention. Yet despite the years of random searches, raids, and minute scrutinising and scientific testing of blue tattoo dye (just in case it was blue cocaine …), Angelo still remains without a single criminal conviction.

After the battle-axe came down, not only has Angelo been subject to the abhorrent anti-association laws, bans on going to certain places and the unlimited capacity for his person and vehicles to be searched, he has been subjected to rigorous and unprecedented harassment.

Instead of being upholders of the law and keepers of the peace, the local constabulary have became arbitrators of social desirability and enforcers of personal standards of acceptability.

Those standards have been set by men with manifestly inadequate experience of the law, and the inability to understand the reasons why centuries of carefully formulated legal principles have attempted to stop politicians from not only making the law, but applying it and enforcing it, and being judge, jury and executioner.

If Angelo was breaking the law, if he was engaging in criminal acts, if he was truly a threat to society and not a ‘fit and proper’ person, he would have a conviction by now.

But he does not.

The over-zealous application of the laws by the police has not made Queensland safe. It has resulted in the the exact opposite.

Angelo has been physically searched so many times he has lost count of the number. His business has been raided, his home visited and family and children traumatised. His 14-year-old stepchild was bullied and interrogated. And for what?

The laws have had zero impact in combating organised crime. 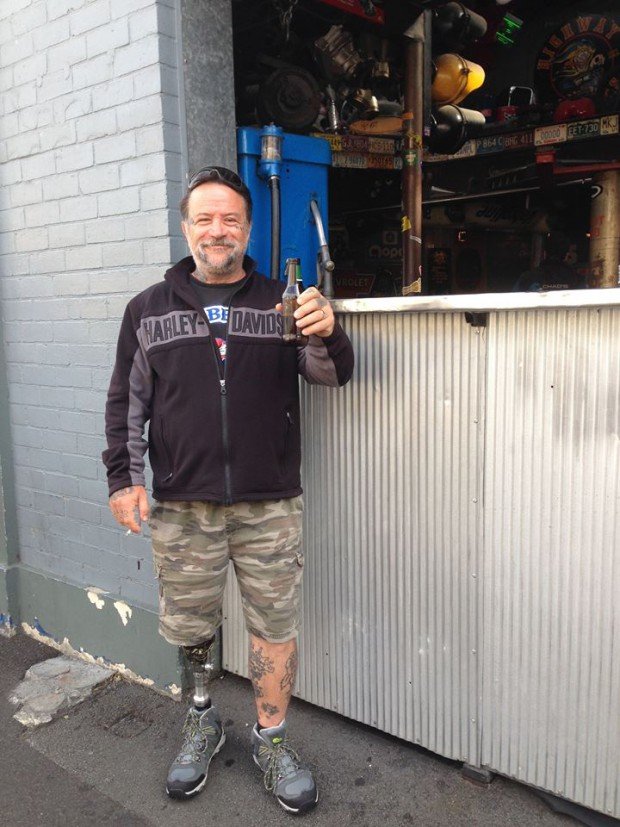 Throughout it all, Angelo maintains his dignity and great-heartedness.

Instead, the manifestly excessive laws have caused a law-abiding honest man such immense stress he has sought medical assistance to cope. The laws have almost destroyed a family, with the pressure so intense, Angelo’s wife needed a break to re-evaluate exactly what she had signed up for: A life of love and commitment to a man with a good reputation in the community, an established career and a retirement plan for the future, not the fierce and unrelenting harassment meted out by the Government and its henchmen.

The Office of Fair Trading has declared Angelo not to be a ‘fit and proper’ person to hold a Tattoo Operator Licence, as required by the Tattoo Parlours Act 2013. He has been denied the right to carry out his lawful and honest business, based solely on the recommendation of the Police Commissioner. He has no ability to challenge the evidence, as it is ‘secret’ and not to be disclosed.

This level of wickedness is unprecedented.

It is unconscionable to remove the ability for a man to earn an honest living, simply because he rides a motorcycle, is a member of a club (arbitrarily declared a ‘criminal organisation’ without even the slightest bit of evidence) and despite him having no criminal record himself.

Angelo’s basic human right to work and earn a living has been decimated; not because of anything he has done, but because of a controlling, power-hungry Government spurred on by a gormless and incompetent police force.

According to the Police Commissioner, it is contrary to the public’s interest to allow Angelo the right to work in his chosen field, in an industry of which he has expertise, in a career he has built up over three decades.

It is incomprehensible how the Government can justify denying a 57-year-old amputee the right to earn a living, rendering him dependent on a disability pension.

It is despicable that the Government declares it is in the ‘public interest’ to destroy Angelo’s livelihood, and decades worth of work.

Instead, thirty years of Angelo’s life has been thrown away, and his retirement plans destroyed, because of a misguided and ridiculous ruling based on an arbitrary declaration of criminality by the State.

It is not in the public interest to force a man onto the pension, well before his years, and deprive him and his family of a livelihood, simply on the whim of ignorant, vacuous politicians with a warped and distorted view of reality.

What outcome does the Government hope to achieve by forcing Angelo out of a job? What purpose does it have, other than petty vindictiveness and a malicious personal vendetta?

Is the Government really concerned with combating organised crime and keeping the public safe? Or is it concerned with the suppression and legislative obliteration of non-conformists and those deemed not to be socially acceptable or desirable, simply to satisfy a bored public who need a bogey-man to fear?

But it has not broken Angelo’s spirit. Despite it all, he retains a fierce sense of pride, his dignity intact despite being kicked in the guts by a Government intent on using him and his brothers as political pawns.

Angelo will not be silenced and his message is clear. Until sanity prevails, he will continue to rise above the petty vindictiveness of the politicians and police who don’t understand the meaning of brotherhood, loyalty and life-long commitment.
The Government has not won this battle.