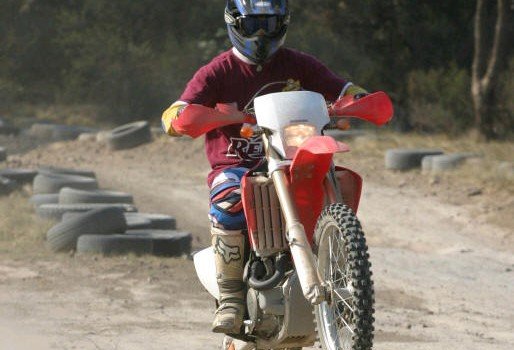 About 10km before Binacrombi Dirt Bike Park on Saturday morning, two wallabies started running away from me on the dirt road as I crested the hill in my car. I backed off to about 50km/h, and settled in about three metres behind them. The one on the left veered off the road to the left. The one on right made a 45 degree right turn in mid air, and lost traction as her feet hit the dirt road. I swept past on her left, and watched as my side mirror filled with an explosion of legs and tail as she rolled along the road. You roll a lot of times when you do that at 50 km/h.

At the time, I didn’t take this as an omen for the weekend.

An hour later, I was wearing huge boots, knee, elbow and shoulder pads and body armour, and riding a Yamaha TTR-250 down to a motocross track thoughtfully provided by the management. It was the first time I’d ridden a dirt bike in over twenty years (unless you count the Suzuki DR-750 as a dirt bike).

My right boot didn’t seem to fit very well, and it hurt my instep.

Dirt bikes are a lot higher now than they were twenty years ago. I didn’t like not being able to put my feet flat on the ground. But, it went all right, so I popped a few baby wheelies on it and charged over a baby jump or two and everyone was so impressed that they told Rod to give me some lessons.

First, Rob told me how to stop on the dirt, and explained the importance of head position. He showed me some hard packed dirt, and said that it gave pretty good traction, and got me to practice approaching it and braking hard. So I did, a few times, and on the last time he said I was doing pretty well, and let’s have one last run. This time I braked really hard, but didn’t let go quickly enough when the front wheel locked, and the front end disappeared to the left.

Then Rob told me how to fall off. There were steps involved, which I didn’t write down, but from what I remember, they were:

I checked myself out. My right hand was jarred and pretty sore, but nothing too bad.

Then Rob told me how to ride up hills. So I practiced having my weight and head position right, and Rob said I was doing pretty well. So we decided we’d go for a ride.

First, we took Ali, our first casualty of the day, back to the cabin. My new hill climbing skills worked really well on the gentle hills back to the cabin. Stand on the pegs, weight forward, head up, let the bike move around under you, don’t worry about a bit of wheelspin.

I went to change my boots, and a glove fell out of my right boot. I put the boot back on. It fitted much better, and didn’t hurt me.

Ali had finished with the Honda CR230, so I thought I’d try it out.

What a sweet motorcycle. It’s lower to the ground, and I could put both feet flat on the ground. It felt fifteen kilos lighter than the Yamaha, and I thought the engine was just as good. With maybe a bit more bottom end.

So we went for our ride. Rob stopped me and gave me some cornering lessons. Inside foot forward, knee bent as counterweight, weight on outside footpeg, Al head over steering head, looking forward, not down.

With an hours instruction on braking, hills and cornering, he then led me off into the Binacrombi boondocks.

I reckon I was pretty good at hills. Even the ones with big ruts on them and covered in loose stuff. Rob said I was OK a couple of times. Trouble was, the hills kept getting longer and longer. And standing up on the pegs with the instruments in your groin and operating handlebars at hip height is quite tiring.

So, I’d think “Hey, I’m two thirds of the way up, and it looks easy from here”. And I’d sit down. Then I’d lose control of the motorcycle and fall off, or end up stalled at a bad angle off the side of the track.

I had a very embarrassing moment when I was charging over ruts and loose stuff up a steep hill, using all the road, and crashed. I was then using all but half a metre of the track with a motorcycle on my left leg. Rob rode past me through that half a metre to the top of the hill, then walked down to help me and give me a lesson on hill starts on loose surfaces. My left knee hurt pretty bad after that.

At one stage, having picked my motorcycle up on a steep hill and got it into position where I could start it and (hopefully) ride it again, I remember sitting with my arms on the handlebar crossbar and my head in my arms, panting, and thinking “People do this for fun?”

Somehow, we got back to camp. It was late afternoon. I took large amounts of aspirin, Nurofen, Heineken, Maker’s Mark and steak. Someone was bandaging Ali’s wrist. I kind of felt better as long as I didn’t walk. There was five minutes of hot water in the donkey heater. I had a hot shower.

There was a huge campfire. There were stories. There was an amusing man trying to out-Mick Mick, to no avail. And I repeated the dose, except for the steak, and didn’t sleep too badly.

The next morning was wheelie school. I had certain fundamental problems with this. This first one was that my left leg didn’t work very much at all. The second was that my thighs, arms and shoulders were a seething mass of pain. Oh, and my left hand, too. 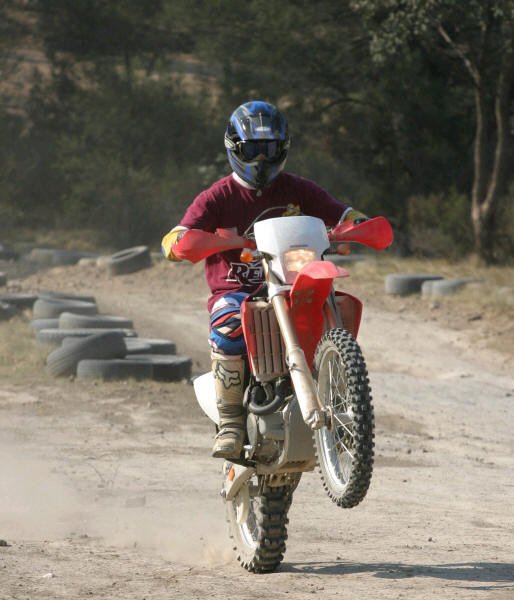 Steve wanted a closer look at the clocks.

I drove the 4WD down to the track and watched for a while. Everyone was having great fun doing wheelies and power slides and jumps. No-one was doing hills. Hmmmm.

I limped back to the car, went back up and put the kettle on, and packed.

Before I go back to Binacrombi Dirt Bike Park, I’ve got to work out a way to do downhills without having to do an uphill before or after.

Our thanks go out to Paul Feeney and Husqvarna for the immaculate Husqvarnas; Honda for the brilliant CRFs, and Yamaha for their legendary WR and TT-R. Binacrombi Dirt Bike Park’s hospitality was great as always and we do personally recommend you go there and get dirty. Hell, we do, don’t we? You’ll find out all you need to know at www.binacrombi.com.au
ShareTweet